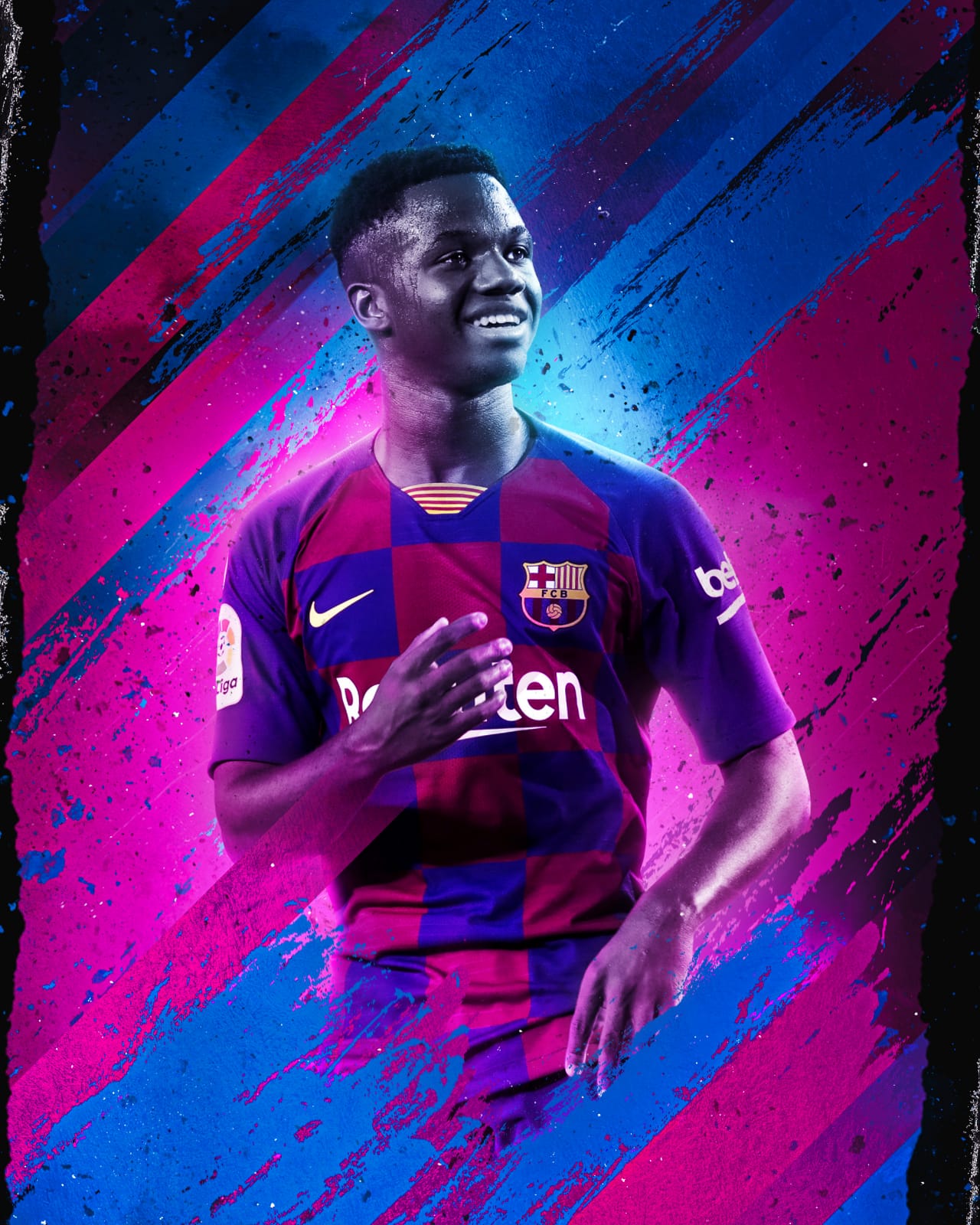 At 17, and a first-team player at FC Barcelona, you may think the path to stardom has been straightforward for this unbelievably talented youngster, nothing could be further from the truth.

Born in the former Portuguese territory of Guinea-Bissau in West Africa in October 2002, little did any of Ansu Fati’s family know that within sixteen-years he would be making his debut for Barça due to the injuries of Lionel Messi, Luis Suárez and Ousmane Dembélé.

The family were so poor that Fati’s father, Bori, had to take the difficult decision to leave the family behind and move to Portugal to seek work. Things did not turn out as hoped and Bori had to beg on the streets. Finding out that there were job opportunities in Marinaleda, in Spain, he travelled and managed to persuade the mayor to get him a job as a taxi driver. Later, he was then able to send for his young family.

Arriving in Spain, Fati grew up in the small town of Herrera, 120 kilometres from Seville. In 2009, aged seven, he joined local side CDF Herrera. A year later, the first big La Liga club spotted the youngster and quickly snapped him up – Sevilla.

Other clubs swiftly tracked his progress as the word quickly spread of an exceptional nine-year-old playing for Sevilla’s junior side, these clubs included Real Madrid and FC Barcelona.

Even though Sevilla’s sporting director, Monchi, offered a better deal than Barça to keep him, Fati signed for the Catalan giants in 2012 as a 10-year-old.

“But they were the ones who came to my house with the contract and convinced me. When Sevilla found out they were angry and they didn’t play him for a year.”

“He came over here aged six or seven, I’d come over before and didn’t know that he played football. Everyone told me I had no idea how good my son was, he ran rings around everyone.”

The determination he had to show to survive the streets of Bissau in his native Guinea and the poor background in Spain, stood him in good stead, as not even two leg breaks in his junior career at Barça set him back. Fati was focussed to make the grade.

He was called up by former coach Ernesto Valverde following injuries to Messi, Suárez, and Dembélé after impressing for the Under-19 team in pre-season, despite being three years younger than most of his teammates. This jump meant he completely missed out any games for Barça B which would be the normal route for any player.

In August 2019, he became the youngest player for Barça’s first-team in La Liga coming on as a substitute against Real Betis in a 5-2 victory at the Camp Nou, aged 16 years and 298 days.

Five days later, he became the youngest player ever to score in the domestic top flight for Barça in a 2-2 draw against Osasuna at the El Sadar Stadium in Pamplona.

In mid-September, he continued to impress. Fati became the youngest ever player to start a game at the Camp Nou in a 5-2 win over Valencia. Seven minutes into the game, he had become the youngest player ever to score and provide an assist in the same league game at the iconic stadium.

Fati broke yet another Barça record by becoming the youngest ever player to debut in the Champions League in the 0-0 draw against Borussia Dortmund last year.

This season, before the suspension of football due to the coronavirus pandemic, he has made 16 appearances so far, netting four goals whilst contributing one assist. With La Liga due to resume on June 11, no doubt his games, goals and assist figures will only increase.

Playing alongside the World’s greatest player in Messi, he is on a steep learning curve from the best. No doubt Fati is the heir to Messi’s throne.