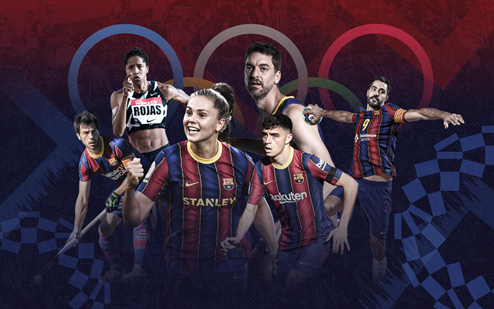 FC Barcelona has historically been well represented at the Olympic Games, with Leo Messi being one of the most famous gold medallists. As the 2020 Tokyo Olympics are underway, it’s time to get an update on how the Barça players are getting along.

A total of 34 athletes are representing FC Barcelona in Japan at the 2020 Olympic Games. These athletes will be active in five different sports: athletics, basketball, field hockey and football. Amongst them, there are 6 football players. From the men’s first team, Pedri (18), Òscar Mingueza (22) and Èric Garcia (20) represent Spain. In the female tournament, Lieke Martens (the Netherlands, 28), Fridolina Rölfö (Sweden, 27) and Giovana Queiroz (Brazil, 18) are all active.

Pedri’s involvement at the tournament has been a controversial decision by the Spanish national team, as Barça would’ve preferred the young star to get some well-deserved rest before the start of the new season. Unfortunately, Mingueza had to leave the field with an injury during Spain’s first game, but it looks like he will be able to return to the team in the later stages of the tournament. García, who recently signed for Barça after leaving the club for Manchester City earlier in his career, already played for Spain during Euro 2020. Unlike Pedri, he didn’t play that many games during the regular season, which is why Barça don’t mind him getting some games in during the summer. Eric García joined La Masía in 2008 and is one of the first two players to come from the Barça Academy (which players go to before going to La Masía) to appear at the Olympics. The other player is Takehiro Tomiyasu, who played for one of Barça’s academies in Japan and is now a prospect at Bologna.

Spain’s men team consists of a lot of big stars like Dani Olmo, Marco Asensio and Mikel Oyarzabal, but disappointed in their first game. All three Barça players started, but didn’t manage to create a goal in a 0-0 draw with Egypt. In the second game against Australia, who surprisingly beat Argentina earlier, Oyarzabal scored a late 1-0 winner. A draw against the Argentinian team will get Spain through to the quarter-final.

Fridolina Rölfö played for just over an hour in Sweden’s impressive 3-0 win over World Cup winners USA. Sweden already made it out of the group after a 4-2 win against Australia, with the new Barça signing even getting two of the goals. In the third game against New Zealand, Rölfö was in the stands as the Swedish team made many rotations. Lieke Martens is also off to a decent start, as the Netherlands beat Zambia 10-3 in their opening game and the left-winger scored two goals. The second game was spectacular as well, as the Dutch team drew 3-3 against Brazil. Giovana Queiroz is yet to appear for Brazil.

Football as a part of the Olympic Games

The football part of the Olympics takes place across seven different stadiums. 28 teams are competing, 16 in the men’s tournament and 12 in the women’s tournament. Men’s football has been a part of the Olympics since Paris 1900 (longer than the World Cup), the second Olympic Games of the new era. This whole tournament was supposed to be an important part of the big World Exposition in Paris, but it failed miserably. Since then, men’s football has always been played at the Games, except in Los Angeles (1932). Women’s football, on the other hand, was only added in 1996 (the Atlanta Games).

A significant difference between the men’s and the women’s tournaments is the age restrictions for male players. Since the 1992 Games in Barcelona, there is a rule that states players can’t be older than 23. Four years later, another rule was added which allowed three players older than 23 to be included in the squad. For this reason, a lot of clubs and fans don’t value the Olympics as highly as some other tournaments when it comes to football, and most countries decide not to select all of their best players. This is also a bit of a historical thing, as until the 1984 Games in LA, only amateur players were allowed to participate. The women’s tournament doesn’t have any age restrictions, which is why it’s seen as a very big deal and all countries send their best teams.

During the time when only amateur players were allowed to play, a lot of different countries won medals. Since the change of the rules, South American teams have earned a lot of gold medals. Brazil won gold at the 2016 games in front of their own supporters in Rio de Janeiro, with former Barça players Neymar and Rafinha included in the team. Four years earlier, Mexico won against Brazil in London, and in 2004 (Athens) and 2008 (Beijing) Argentina took home the gold. Leo Messi, Sergio Aguero, Angél Di María and Riquelme were amongst the players that won in 2008. They beat Ronaldinho’s Brazil on their way to Olympic glory.

Spain missed the last Olympics, but now they are aiming for a medal. The last time a European country won, was Spain at the 1992 games in Barcelona. That team included former FC Barcelona managers Pep Guardiola and Luis Enrique. In total, Barça athletes have won 65 medals since the Antwerp Olympics in 1920. The club has been represented 255 times.

The United States usually do very well at the women’s tournament, winning four out of six gold medals. In 2016, they were kicked out by Sweden, who already managed to beat them again in Japan. Sweden eventually went on to win silver, and the Netherlands lost the last World Cup final against the USA.

The 1992 Olympics in Barcelona

In 1992, the summer Olympics were held in Barcelona, with the Camp Nou and the Estadi Olímpic on the Montjuic Mountain amongst the many selected stadiums. The opening ceremony was held at that same Estadi Olímpic, where Don Felipe IV, who is now the king of Spain, carried the flag for the Spanish team. He was actually one of the 9.356 participants of the Games and finished in sixth place in sailing. Spain’s football team, with players like Pep Guardiola, Luis Enrique and Albert Ferrer, won a gold medal at Camp Nou. Other than that, Spain only managed to win 21 medals, but the fans were happy with how the tournament went nonetheless.

Barcelona ’92 was an important event for the city. A few weeks earlier, Barça won its first-ever European Cup after Koeman’s goal in the final. The Olympics really showed the world what the city had to offer and made it one of the biggest tourist destinations in the world. It is well known that tons of money are involved with organising the Games, and these billions of euros resulted in significant improvements to the infrastructure, making a visit to Barcelona more attractive. New roads were built, the hotel industry had a makeover and the airport was improved. Furthermore, the Olympic Village was built close to the sea, creating a better connection between the city centre and the beach.

Pedri, Èric García and Òscar Mingueza will face Argentina tomorrow (28-7) in their last game of the group stage. The game will be played at 20:00 local time at the Saitama Stadium. The women’s games always take place a day earlier. Today (27-7), Fridolina Rölfö’s Sweden took on New Zealand at 17:00 local time at the Miyagi Stadium, winning 2-0. At the same time, the USA and Australia drew to determine the final ranking of group G. At the time of writing, Lieke Martens is playing at the Yokohama Stadium, as the Netherlands look to beat China. In that same group F, Brazil and Giovana Queiroz are currently trying to book their place in the quarter-finals as they face Zambia.