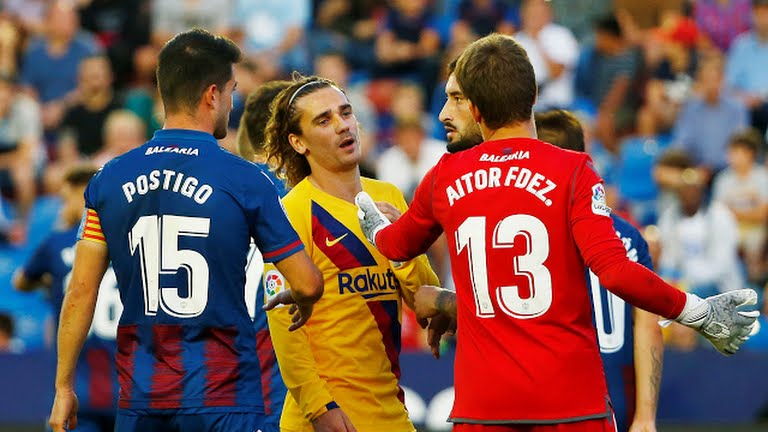 Despite an opener by Lionel Messi as the first half came to a close, the goal was later cancelled out as Levante went on a three-goal scoring spree late in the game.

Following a good performance at the Camp Nou against Real Valladolid last Tuesday, Barcelona had to face a new challenge at the Ciudad de Valencia. Levante came into the game with one win out of their three last games, but have despite their form been known to trouble Barcelona whenever the sides clashed in Valencia.

Despite the Barcelona faithful having hoped for a change of fortune, Saturday’s game in round 12 of La Liga this season was no different.

Barcelona’s starting lineup saw Marc-André ter Stegen in goal with Sergi Roberto and Nélson Semedo in the full-back positions with the Portuguese playing as a make-shift left-back. In the heart of defense were no surprises, as the pairing consisted of Clement Lenglet and Gerard Piqué. The midfield trident consisted of Frenkie de Jong, Arthur and Arturo Vidal, and up front was the ‘MSG’ trio in Lionel Messi, Luis Suárez and Antoine Griezmann.

Lionel Messi converted a penalty by sending it into the top right corner, for the opener, and got his 500th left-foot goal. The goal also was from the first penalty awarded to the Catalan side in La Liga this season.

After the goal, Levante slowly started to gain control of the game, and on the hour-mark of normal play, the home side went on a three-goal scoring spree.

José Campaña, who has been a reliable figure for Levante this season, scored the equalizer. After miscommunication in defense after a panicked clearance by Sergi Roberto, Levante regained possession, the former Madrid-man, Borja Mayoral, found José Morales who teed it up for Campaña to slot it home.

Statistics from the game show that Barcelona had a bigger share of possession and passes, and although Levante had less shots on target [3 to Barcelona’s 6], they simply managed to be more efficient for the most part.

Barcelona retain their 22 points in the league, and their next challenge is on Tuesday in the Champions League, when Slavia Praha guest the Camp Nou.