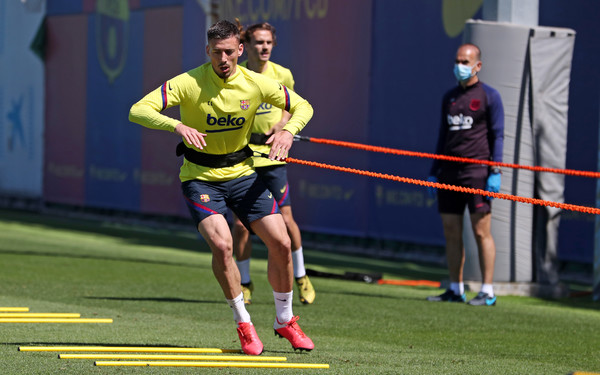 Clément Lenglet talks about football after lockdown, Messi, Dembélé and more in an interview with Mundo Deportivo

FC Barcelona’s French defender, who is about to turn 25 on 17th June, is one of the important players in FC Barcelona’s current squad and can play an important role in Barcelona’s quest to win remaining matches of this season.

-About training and football after the lockdown

“We are happy to be back on the field, to see each other again because it has been a tough two months for everyone, away from family, friends and when we are in the dressing room, we are happy and want to compete”, he said.

When asked about whether it is strange or it is something normal to be able to train together after so much time, he said, “Now we are in a more ‘normal’ situation, even though initially it was very strange to come to the facility in training clothes and go home with dirty clothes”

Lenglet thinks that even with risk of injuries and lack of matches, this kind of preseason is better than the preseason they do normally because there won’t be much travelling and players won’t have to go through different time zones as its very tiring.

When asked about Champions League and La Liga matches, he said, “If UEFA decides to go with one-legged ties, it will take us 15 more matches to win the double (La Liga and UCL). There is a lot of work for that but it is a unique opportunity because it has never happened before and we will have to work as hard as possible to play the two titles to the fullest.”

He was asked about his desire to win UCL, on that he said “The team would like it very much, it is something which both players and fans have been waiting for a long time. It has been 5 years since we last won it.”

Just like the rest of the footballing world, the French defender would like to play matches along with fans as soon as possible.

“We have no other option, it is something that I do not like very much but right now it is impossible to have fans in stadiums according to those who command, and we have to accept it. But of course, we want to play again in a few weeks with an audience because football without an audience is very different from a full stadium with an atmosphere.”

Returning to training after a long gap was something different and to be in good shape with matches coming in at lighting speed is important. He was asked about his teammates’ condition.

“We (the squad) are quite well. We have been unemployed for a few months and for players who do not have almost a vacation this break has been good for them. We have worked quite hard during these weeks at Ciutat Esportiva to return to an optimal physical level, and I think we are already prepared to compete, win games and take the League.”

“Players like Leo (Messi), Antoine (Griezmann) and ‘Busi’ (Sergio Busquets), are used to playing all the time, they got well deserved rest because of this break.”, he added.

He talks about Leo Messi’s latest injury news and Luis Suarez’s medical green light, “He (Messi) returned to training with the group on Monday after a minor nuisance and, as always, he has trained very well. He is very prepared for what is to come.”

“Luis (Suarez) has not been in such a hurry and he looks very good in training and very comfortable with the ball. It (his return) will help us a lot.”

“He is training on side-line, has a different program and is working with the club to recover quickly. Also, the coronavirus stoppage has helped him a little. We don’t know if he will be available at the end of the season but he is trying to recover as soon as possible.”

“I think he is fine. He had a bad time with injuries and getting injured again before playing made him frustrated. Now he is much better, wants to return and is doing everything perfectly without taking much risk.”

-His future at club

Mundo Deportivo published an article about Inter’s interest in Lenglet. On this, he was asked about how he sees his future.

“I am delighted to be here, wanting to continue playing and win titles. See what happens. Of course, we are not very sure about the Covid issue because it has been very difficult for everyone and we do not know where we are going in the coming months, but I am happy here and see what happens.”

Later on, he was asked about coach Setien benching him in some important games like El Clásico and against Napoli in UCL.

“I keep working, of course I like to play these kinds of games, because they are the ones that we all want to play, but from there on there is no other choice but to accept it and continue working. I think the games I’ve played I’ve done quite well. My job is to make it difficult for the coach, so that when he starts thinking about the team at night, he has a difficult decision to make.”