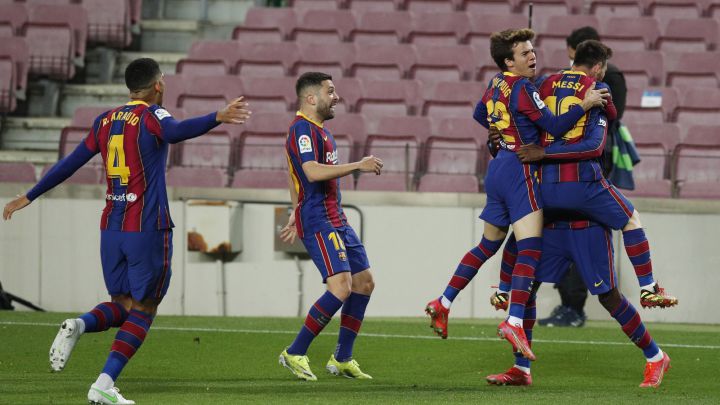 Barça overcame Real Valladolid thanks to an Ousmane Dembélé goal in the final stretch of the game, in a nail-biter which saw red cards, penalty claims, and much more. Ronald Koeman, Clement Lenglet, and Frenkie de Jong commented on the team’s level after the match.

Did you believe in the victory till the end?
“The feeling from the bench was that we could win it in the last. The players have shown until the last minute that they believed. Sometimes you have to suffer to win and it is also good. Winning LaLiga means you also have to suffer.”

On Dembélé being decisive again
“Of course it is important for us that he is at his level. He contributes a lot to us in playing one against one and he has played in the three positions up top. With him you can play differently and he has given us the goal. He is better physically and in the season the key has been his regularity at work. If it’s down to me, of course I’d like him to stay with us.”

Do you think El Clásico will be the decisive factor in the championship?
“I don’t think this game decides LaLiga because we have eight more games to go after it. They are fighting for the maximum this season and we know that we have to be well and focused and that a good result would be key.”

Do you consider yourself a lucky man?
“There are moments in life when you are lucky, other moments when you are unlucky. If you are a Barça coach, you are lucky. But that is football. With more luck, we would already be first in LaLiga.”

On the team’s performance
“The team was not doing well, but we suffered and worked hard until the end to score a goal. Sometimes in life you have to suffer to win. I had the feeling that we could win until the last minute. We did not show the level we had in the previous weeks, we did not start well, but we suffered and we have to win. We must bear in mind that we came from a national team break and the team was slow, without ideas, we improved in the second half, improving the system. We lacked things in attack to create chances and also in the creation of the game. In the second half we were better.”

On the importance of the result
“It was very important to win, to be closer to Atlético, although Madrid is also close to them. LaLiga will be very exciting until the end.”

On Valladolid’s performance
“Valladolid played a great game defensively and created danger. Against all teams you have to fight to the maximum.”

On Valladolid’s penalty claim
“I have not seen the image of the penalty – in reference to Alba’s hands – I cannot say if it is. The VAR looked at it and decided no. If it was a penalty, we were lucky in this play, other times it has been the other way around. In the end there is a balance.”

Here is what Clement Lenglet had to say:

Has the team suffered today?
“Yes. This League is very difficult. We have to fight to win. Today we had many situations and in the end Ousmane scored. We have to work because there is still a lot to do.”

On the performance
“We had a great rival who left their skin on the field. And I think there was a lack of energy, the last pass was missing… It was a difficult game but an important victory.”

On Dembélé becoming decisive
“Yes. Am I surprised by Dembélé? It does not surprise me because he could not play due to injuries and now he is calm with this issue. When he is physically well, he’s a great dribbler, he quickly manages both legs. I’m happy for him because he has worked.”

On the red card
“Ousmane was hit hard from behind, but I don’t see much to say. I think the red one is deserved because it comes from behind. The blow from behind can be dangerous.”

On the team’s fate now being completely in their hands
“It is the fruit of our work. We have worked a lot. But much remains.”

Here is what Frenkie de Jong had to say:

On the performance
“We have suffered a lot, but in the end we have won and that was the most important thing.”

On the importance of the game
“It was a very important game, because Atlético lost points and it is always difficult after the national team break, but we are happy to have achieved the victory. Since the new year we have shown great team spirit and the results have allowed us to be where we are now.”

On his preferred position
“I prefer to play in the midfield, but if the best thing for the team is for me to play as a center back or in another position, I will. Today we changed a lot in the system and I played in many positions.”

On his cross leading up to the goal
“I was a bit nervous, but when I received the ball I thought I had to cross a lofted ball and up for Ronald and in the end it ended with Ousmane’s goal”

On his performance
“I’ve been very careful not to make fouls so as not to see a card and miss the game vs Real Madrid.”