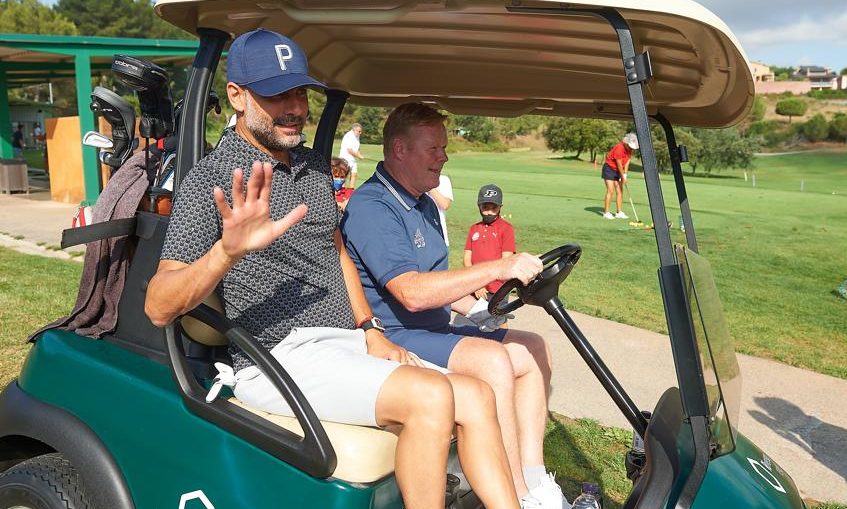 This morning, the Koeman Cup, a friendly golf tournament, was held, with Pep Guardiola, Riqui Puig, and others in attendance. Ronald Koeman spoke to the attending media about the Messi contract situation, Griezmann’s continuity, Pedri’s participation in the Tokyo Olympics, among other topics.

If he’s worried about Messi’s continuity:
“Whenever everything is not solved, you have to be concerned but I have full confidence in our president to fix this issue. Leo is very important for the club but also for the Spanish League, as remains the best player in the world. We all have to make an effort for him to stay with us.”

On Tebas’ statements:
“Each one defends his own side, but we want it to be. Laporta has told me that he is calm, that we are working on this issue and that we have the confidence to reach an agreement with Leo to continue for a few more years.”

Whether Messi staying will condition his team next season
“It is better to know which players the team will have available to train but we also know that it is a preseason that serves to put everyone in good physical shape. You can work with the whole team a few days before the start of the League and until the end of August things can happen but we are used to it.”

If he asked Messi for any gesture to show his intent to stay
“Leo has always shown that he wants to continue at Barça. I know the club is working with his father or his father’s lawyers to reach an agreement. He is in the Copa América playing and in his head he has other things. Hopefully he wins the final this Sunday. Leo has always done the maximum with this club and for me he has to continue. Seeing him end up with another shirt is not good.”

On Griezmann’s continuity:
“I am going to count on all the players we have. If there is any change, it will be necessary to accept it, but they are things and decisions that the club must make. We’ll see who stays and who leaves because there is a lot left in the transfer window, but it is clear that the priority is for Messi to stay above all else. For me, Griezmann is very important. He has been a great signing for Barcelona and has shown his quality. He has performed very well and he is a very good player. But I insist, I don’t know what decisions will be made in the end because the most important thing is that Leo stays with us. He is the future of this club and we must try our best to keep him.”

On Pedri’s potential participation in the Tokyo Olympics:
“For a player it is too much to do two competitions at the highest level in the summer. Pep Guardiola already said it and I agree. He has been in a season in which he has played almost everything and has also played every minute in the EURO. Having no holiday and traveling to Japan to play is not good. It is too much.”

On the Olympics themselves:
“It is a personal opinion, but for me the Olympic Games should be athletics and other sports, but not football. I say it on a personal level. I understand the excitement that the players have, but the calendars are very complicated and we must protect all the players.”