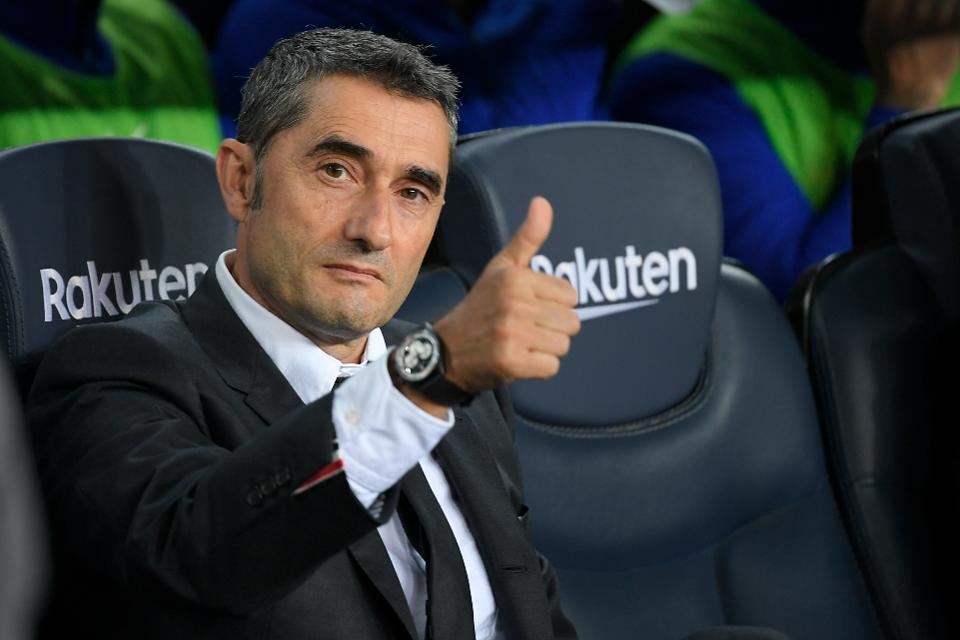 As part of the build-up for the Champions League game against Inter Milan midweek, Ernesto Valverde, later joined by Antoine Griezmann, held the pre-game press conference on Monday, where many topics were discussed.

This Monday at the pre-game press conference for the Inter clash midweek, Ernesto Valverde emphasized that the game would not be an easy one, partly due to the Catalan side’s many injuries, which he also gave updates on. Griezmann joined the manager in the press conference, and opened up about his relationships with his teammates and the start to his new life in Barcelona.

Ernesto Valverde started by praising the Nerrazurri for their fine form in the Serie A this season, and gave a status report on the recoveries of Ousmane Dembélé and Lionel Messi, who ultimately made the game’s squad list.

“Inter have had a spectacular start to the season, and we’re expecting a difficult and complicated game,” began Valverde.

“[Ousmane] Dembélé only completed half of the full squad training session, and Messi completed a bit more than that. But we will see how their training today [Monday] goes, and whether we can count on them [for Wednesday]. However, I don’t think neither of Ansu [Fati], Jordi [Alba] nor [Samuel] Umtiti will be with us tomorrow,” Valverde said.

And, sure enough, Jordi Alba, Umtiti and Ansu Fati are all excluded from the squad list for Wednesday’s game against Inter Milan. However, Leo Messi and Ousmane Dembélé have made the cut, without notes of lack of medical discharge. It does seem unlikely that either of the two would play from the get-go, though.

“Physical preparation is very important. We’re not happy about our injuries. Dembélé’s injury is similar to the one he had last season, and we’ll see if we can control it. We won’t take any risks with Messi, and decide his participation tomorrow based on the training session today [Tuesday],” the manager assures.

Much talk has been made surrounding the club’s situation, in the midst of lawsuit, unattractive performances on the pitch according to many, and not too convincing results. Valverde remains unfazed, and sees the atmosphere as nothing too strange.

“I think the atmosphere [now] is similar to that of other seasons. Throughout the year, there always are some players who play more than others, and therefore are happier. That’s not strange — everyone wants to play,” the Vlandar de la Vera-born manager stated.

Even though some would put Barça over Inter in their predictions, Valverde doesn’t see a clear favorite, and despite the criticism, he feels like he belongs with Barça.

“We play at home, but I don’t know who the favorite is. We want to win, and we have the obligation to do so. The goal is to win our group [group F]. I feel at home here. Coaches have to deal with many things, with players, with pressure and the media… And everything gets better if you’re winning games, but I feel good and I’m comfortable [here].”

And lastly, Valverde gave his take on Inter’s play so far.

“[In the Champions League] teams try to do what they usually do. Inter were not very good against Slavia [Praha, who lead the group currently], but then they played a great game against AC Milan. In the big games, teams show the best version of themselves,” Valverde said, before Antoine Griezmann started his part of the press conference.

Antoine Griezmann is looking forward to more Champions League action in a Barça shirt, but knows that it won’t be easy with the absence of some big names.

His start has been a mixed bag according to some, and he acknowledged that, while also talking about the friendship he has and is building with his teammates.

“I feel comfortable, but I have to improve my movement [off the ball]. I’m good with the ball, but I’m missing some things to be the best possible Griezmann I can be… I’m on my way,” the Frenchman said.

Due to Lionel Messi’s injury, Antoine Griezmann’s bonding with the Argentine hasn’t been as good as it could’ve been, as they spend less time together on the pitch and in training sessions.

“Neither Messi nor I talk a lot, so it’s difficult for us to talk with each other [in the beginning], but I’ve already prepared some maté for him, and our relationship is going in the right direction. On top of that, he’s been injured. So, it’s complicated, and we still have to improve our connection on the pitch,” Griezmann said.

“[Ousmane] Dembélé is getting to training sessions early to be more prepared. He takes care of himself, but when you enter an injury streak, it’s difficult to get out of it. He’s got mine, Valverde’s and his teammates’ support,” the new man added.

Griezmann also talked about the beauty of the Champions League, and Antonio Conte’s influence on Inter Milan.

“Antonio Conte works hard for his teams, and that’s why tomorrow’s game will be a difficult one. We’ll have to play well to get all three points,” the former Atlético man points out.

And, lastly, Griezmann talked about his adaptation to his new surroundings and his role on the pitch.

“My family and I are very happy here. I learn new things about how to prepare for games [in a different way] and I learn another vision of what football is,” he said, before giving his opinion on him playing as a right winger:

“I just arrived, I’m here to help my teammates. I know my answers are boring, but I can’t say much more than that,” Griezmann said.

One thing that’s been very apparent has been the Camp Nou’s warm reception of Antoine Griezmann; it’s something that some media outlets and many fans alike speculated wouldn’t be the case due to his and Piqué’s making of the infamous La Decision just a year prior. The Frenchman, however, is very happy with the reception he’s gotten so far.

“The Camp Nou’s reception of me has been very good. They’ve been chanting my name, and I hope I can give them the love they’ve shown me back. I want to play every game, every minute, and become an important part of this team.”

The Champions League clash, between two of Europe’s historically biggest clubs, kicks off at the Camp Nou at 9:00 PM CET.