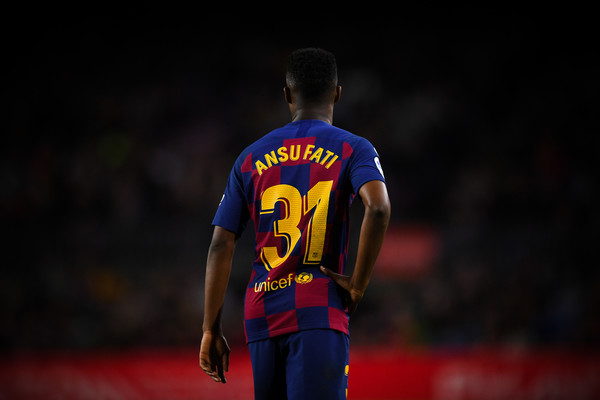 While FC Barcelona remains interested in offensive transfer options Memphis Depay and Lautaro Martínez, Ansu Fati will reportedly be an official part of the first team.

According to ESPN, Fati’s official promotion to the first team means he’ll have a first team shirt number. The termination clause of his contract will also increase from 170 to 400 million euros to keep away interest from other clubs.

This agreement between player and club was made last October. However, since then, Fati has left his former agent Rodrigo Messi (Lionel Messi’s brother) for the likes of super-agent Jorge Mendes, who also represents Cristiano Ronaldo.

Ronald Koeman is said to be very content with the youngster’s potential and ability to play in multiple attacking positions. Fati (17) recently became Spain’s youngest ever goalscorer, shortly after making his senior international debut.

Despite Fati getting a more prominent role, Barça remains interested in signing another attacker. Memphis Depay (26) is a personal favorite of Koeman, but according to ESPN, FC Barcelona has not been in talks yet with his club Olympique Lyonnais, because Barça is looking to offload some players first to generate revenue. The hight of his transfer fee is rumored to be around 25 million euros.

This lack of income also means it is currently highly unlikely Barça will sign Inter Milan’s Lautaro Martínez (23). Javier Zanetti, Inter legend and current Vice-President, has said he considers Lautaro to be a big part of Inter’s future.