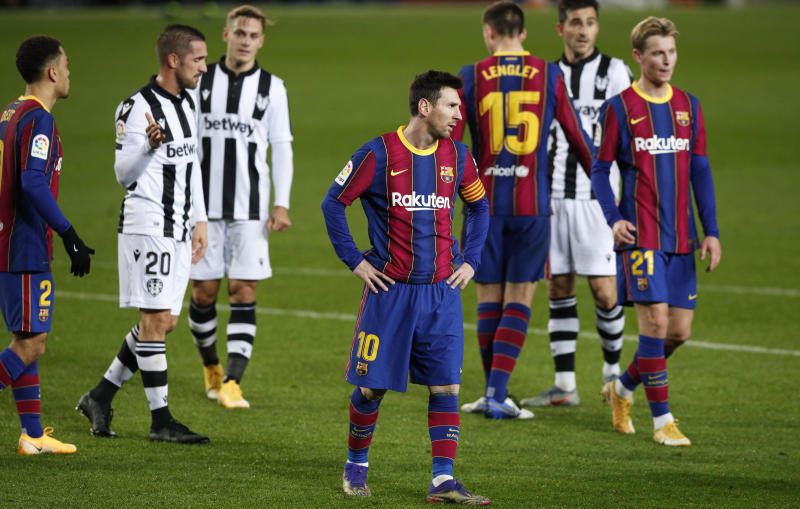 Barça faces Levante UD tonight in an away fixture at the Ciutat de València stadium with just three more games remaining to decide their title’s fate in the coming weeks.

FC Barcelona drew against Atlético Madrid (losing those crucial 2 points), in what was touted to be a title-defining fixture last weekend. But after their arch-rivals Madrid followed a similar result against Sevilla drawing 2-2 at the Alfredo De Stefano the very next day, the title race again looks intact for these three teams which will now move ahead into the final phase of the La Liga campaign.

Now, practically, after the draw against Atlético, Barça doesn’t hold the right to win the title unless both their rivals drop points in their remaining matches. So tonight’s fixture more or less becomes crucial in building pressure on their opponents in a hope that they slip up in their upcoming games.

Koeman has announced a 23-man squad to face Levante tonight. I’m hoping that the dutchman will stick to his regular 3-5-2 formation but there’s a concern regarding the holding position in the midfield tonight. Busquet’s concussion in the last game looked serious causing him a facial fracture. So, even though the Spanish midfielder has been given a green signal to play with a facial mask, it’s still a concern regarding how fit he’ll be for tonight’s game. Ilaix & Pjanić remain Koeman’s favourable options in that case. Puig however, is also included in the squad.

At the back, Lenglet & Piqué are likely starters with probably Araújo on the right earning his fair chance for his solid performance against Atlético last week. Mingueza can fill in the Uruguayan’s position in the second half.

Upfront, alongside Messi, Griezmann might start in the attack as usual. With no goals for both the strikers in their last match, I’m seriously counting upon them to get the Blaugranas an early breakthrough tonight. Dembélé & Trincao remain likely backups.

As for Levante, Jorge de Frutos has delivered eight assists this season, more than any Barça player apart from Leo Messi (9). He’s also equal at goals with Antoine Griezmann. So he’s someone to keep an eye on!

Barça’s overall league record away to Levante is 7 wins, 4 draws and 3 defeats. The pressure to secure those 3 points is going to be high. Goals are bound to come from both sides. I’m expecting a 3-1 win for the Blaugranas.