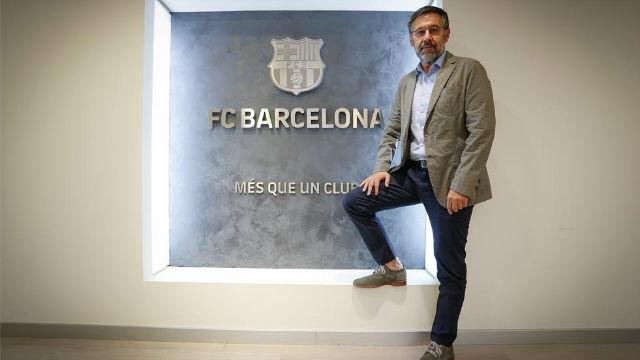 “We would have liked to renew Arthur’s contract now but due to economic reasons, it was difficult. Moreover, during times like these, looking at the player who has not established himself in the starting lineup as a future aspect can be risky. Arthur had an offer from a club and this club had a player, Miralem Pjanic, with whom there have been interests from Barcelona for several seasons, hence the agreement was reached. But the decision to leave Barça was made by Arthur. They offered him an important role in the team, which he did not have in Barcelona and he will be earning more than he was earning in Barcelona. Italian taxation is more advantageous in this regard and it is easier for teams to have players at a more affordable cost”, Bartomeu told SPORT.

Barcelona losing a player for Champions League: “We had an agreement with the player that he will continue with the club until the end of the season, that is, in the league as well as Champions League. But the player did not return from his vacations and it is an act of indiscipline, which is unacceptable. That is why we have decided to open a case against him.”

If he has given any reason for his absence: “He called Abidal but didn’t give any specific reason. In simple words, he decided that his time in Barcelona has come to an end and he doesn’t want to return. This forces us to open a disciplinary action because he must play with Barça until the Champions League ends like Pjanic is doing at Juventus. It was a pact between the two clubs.”

About the disciplinary action: “You have to analyze what happened and try to know the causes. You have to ask the player, to see what reasons he gives. If his reasons are not justified, there will be a financial penalty, that’s for sure. What he has done is a lack of respect for his teammates, because the team wants to do well in the Champions League. It is unjustifiable and totally incomprehensible.”

If he can participate in the Champions League: “No, because he has decided not to return. He called and said, ‘I’m not coming back, I’m staying in Brazil.’ It is his decision, no one has given him permission to do so.”

If Arthur’s transfer was a good decision: “It is a good operation economically. Arthur was a good player, although not indisputable. He was a good number ‘twelve’, but the sports management has preferred to have Pjanic, who is a player that we have been following for a long time.”

If he thinks that the squad is filled with old players: “I do not agree very much when it is said that this group of players who are over 30 years old has lost their ambition. They train well, they try hard, they have ambition. The best thing is to combine veterans with new ones. They keep intact the ambition, the desire to win, and the desire to play. And if sometimes they get angry and make comments it is because they are competitive and they want to win.”

Generational replacement of the Barcelona squad with the arrival of young players: “The generational relay is coming. The older ones are still ambitious, I’m not just talking about Leo, but also about Suárez, Piqué, Alba, Busquets, etc. Now comes another batch of young people: three signed, including Matheus, and three who will be promoted from B. The arrival of seven players in a year, counting Pjanic, is not bad.”

About the players who will get promoted to first-team: “Araujo, Riqui Puig and Ansu Fati will be first-team players. At the moment we have not discussed any more names, but there is still a long way to go. For example, pre-season can decide if more players will be promoted or not.”

Lautaro Martínez: “We have spoken with Inter for Lautaro for several weeks, but the talks have stopped by mutual agreement.”

Neymar: “In this situation, it is unfeasible. PSG doesn’t want to sell him, it is normal because he is one of the best players in the world. Last summer we tried very hard, but this summer there will be no attempt.”

If there won’t be any expensive signing anymore: “I think so, unless player exchanges are made. All major European clubs are affected and this is not going to last a year but more than that.”

Pjanic’s contribution: “We have been following him for a long time. But years ago it could not be, because the club did not want to sell it. He was always delighted with the possibility of coming to Barça. It was not a surprise signing. He will easily establish himself as a major player.”

If the coach is going to continue next season or it depends on the Champions League performance: “He has a contract. When we hired him, we explained to him that it was a project for this season and all the following. Judging a coach for a few months, with a pandemic in between, is very difficult. Like Arturo Vidal said in his interview, the coach and players have had very little time to get to know each other.”

If he has ever thought about sacking Setién: “No, not even once. I know that some information came out saying that if he didn’t win two games we would exchange him for ‘Pimi’ (Pimienta), but that was never discussed. Setién is our coach.”

If the club has looked for an alternative: “We have not spoken to anyone. Neither with Blanc nor with anyone. I do talk to Xavi because we have a good relationship, but he recently renewed with his team. Xavi will come one day to train at Barça, but only when he thinks he is ready.”

If Barcelona has received any offers for Ansu Fati: “We have not received any formal offer for him, but there have always been interests from different clubs. Our answer is clear, Ansu is not for sale. He is essential for the future of this club, and moreover, he represents the La Masía academy, through which many players have been promoted into the first team”

Ansu Fati’s contract extension: “He signed a contract as a Barça B player, now the plan is to transfer him to the first team. That contract that he signed in December already contemplates it. He goes to the first team because he has earned it. Together with Riqui and Araujo, he represents La Masía that makes young players capable of reaching the first team. These players have shown that La Masía continues to produce excellent players.”

If he has personally spoken to Ansu to make sure that he doesn’t leave: “I have not spoken to him personally, but I have spoken to people around him in the last few days. I have reiterated that despite offers coming, the club has no intention of selling him.”

If Ansu Fati is the future of Barcelona: “He is 17 years old. Let’s not put pressure on him. Now he has to play and train with the best players. It is still early to say.”

About the Coronavirus crisis and other things:

If the Coronavirus crisis affects the big teams more: “Yes, it mainly affects the big ones. There are problems due to the lack of commercial income. There is no ticketing, no museum tours, no stores, no VIP boxes, etc. Barça is the club in the world that earns the most from these, therefore it is the most affected. Small and medium-sized clubs are less affected because their income depends on television rights, which is still guaranteed. In our case, television accounts for 25 percent of the budget, the rest is business income. That is why it is time to thank the sponsors, who continue to bet on Barça although, their companies are also suffering.”

If he has considered leaving: “I’m not leaving because I have a responsibility to complete. There is also a strategic plan in place. It would be irresponsible for the board to leave now. No one knows Barça better than those of us here. No one knows the players, the coaches, UEFA, FIFA, RFEF, the League better. Next year we have to leave everything well prepared and on track. We have created a special executive commission to monitor all economic operations in the coming months. It will be formed by two vice presidents, Jordi Moix and Oriol Tomàs, the director David Bellver and Òscar Grau.”

If this is the most difficult year for him as the president: “The pandemic is something absolutely unexpected. It affects us all. I know there are people who are having a very hard time. It is important that within the club we are all aware of what is happening to make the most appropriate decisions.”

The ‘Barçagate’: “There was no fraud, no corruption, and no commission to defame the players. I am concerned that the supplier has not finished his work. Those jobs have to be finished.”

Public return to the Camp Nou: “We would like it sooner. Hopefully, it can be when the new season starts. We have already launched the ‘Espai Net i Segur’ plan to prepare the return of our fans to the field. Now, we have had the case of Fuenlabrada, and the positives in other teams, but it is about following the protocol.”

Espai Barça not being completed on time: “Espai Barça worries me because we are late. There was already in 2000 with Núñez, it continued in 2003 with Laporta. It is not that it is the legacy of a board or a president, it is a project of the club, approved by the members in a referendum. The club knows that it needs to remodel the stadium. First, because the stadium is getting old and second because we are entering an era of new income, largely related to the stadium. I want the project to start as soon as possible, a referendum was scheduled for April. If everything would have gone according to the plan, we would have had cranes inside the stadium in May, but due to the Coronavirus crisis, everything has been derailed.”

If there will be a new referendum: “The partner must approve for financing. That’s the only thing missing. The project is finished, the plans are done and we are looking for a construction company. The financing is approved but the approvals by socios are remaining. It is the financing of 800 million for the entire Espai Barça. A referendum must be held. It could be done in an assembly, but it is a club project and all members must vote. If we see that it is impossible to hold a referendum, we could go through the assembly of delegates. But the sooner the better. We cannot lose another summer. Our rivals have new stadiums or are remodeling them. Some parts can wait, such as the offices or perhaps the Palau, but the Camp Nou cannot wait. We need to remodel it as soon as possible.”

“If Goldman Sachs approves the financing, they will lend us the money without guarantees or mortgages. The money will be returned with a part of the extra income we will get from the stadium being remodeled. It is an unusual loan. Goldman Sachs believes in Barça and is committed to partnering with the club in this project.”