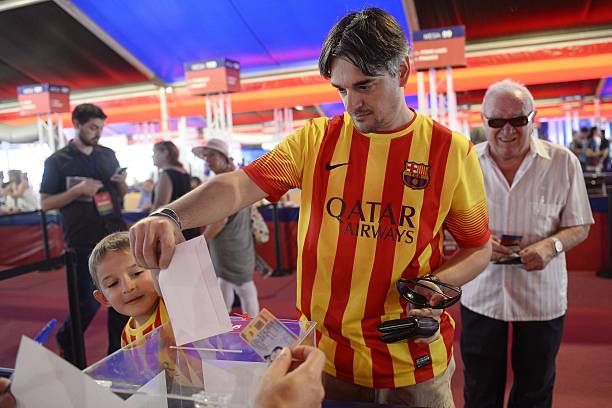 The FC Barcelona Management Committee met today in the ordinary session and has reached some resolutions regarding the upcoming presidential elections.

In accordance with the agreements of the Management Committee, dated January 15 and today, and after having been obliged to postpone the date initially set for its celebration, due to the impact of the restrictions imposed by the Government of Catalonia as a result of the Covid-19 pandemic, the Management Commission has agreed to call elections to the Board of Directors for March 7, 2021, uninterruptedly, from 09:00 to 21:00, simultaneously, in the various venues electoral bodies arranged for voting.

The Management Commission wants to underline that the holding of these elections is conditioned by the exceptionality derived from the Covid-19 pandemic, so they will be organized following, at all times, the provisions and indications of the health authorities, in order to protect the health and ensure the safety of voters.

This postponement in the holding of the elections has meant a modification in the calendar of the electoral process that, in accordance with articles 40 to 54 of the Club’s Statutes, began on December 16 with the draw for the election of members of the Board and the Electoral Table, in accordance with the electoral census approved on the following December 30th. Thus, the electoral campaign in which the three candidates for the presidency proclaimed on January 14 will participate, will run until March 5 , and the day of reflection will be on March 6.

After the Government of Catalonia modified the Sports legislature to allow for postal voting for sporting bodies, the club has begun to take the necessary steps to allow this to take place. The incorporation of postal voting will be undertaken via ‘Correos’ (National Postal Service’) and their network of offices and staff who make possible with the corresponding certificates secure voting for members residing in Spain and Andorra in line with postal voting in local and national elections. There will be two ways to vote by post: general, via the post office assigned, and the option to vote from home, available for members over 65 years of age who request it and those who cannot leave their residence for health reasons.

Between 29 January and 9 February, members who choose the vote by post will have to inform the Club via a form that will be available on the Club’s website from Friday 29 January. The Club will reply detailing four aspects: confirmation of the postal vote; the manner of the vote (general or from home); the Correos Post Office where the vote can be made; that a postal invalidates voting in person. The postal documentation, with the voting slips and corresponding envelope, will be delivered to home via the Correos with a certificate to confirm the voter’s identity.

Members who have requested to vote from home will have to exercise their vote at the moment that Correos staff deliver the documentation with the voting slips and corresponding envelope. The count, both of votes in person and those sent to the Club by post, will take place once the electoral day of 7 March is over and the results will be made public once known.

The plan for the current restrictions around Spain to be maintained until the date of the elections (restrictions of mobility within municipalities, curfew), makes it impossible for the polling stations initially planned outside of Catalonia (Madrid, Seville, Valencia, Mallorca) to allow resident members of those autonomous communities and those adjacent to vote. Therefore, given the circumstances, and once the ability to vote by post allows greater participation in the elections, the Commission has had to withdraw the polling stations situated outside Catalonia with the exception of the Principality of Andorra. As a result, the elections will take place in a decentralized manner in six polling stations: Camp Nou-Barcelona, Girona, Tarragona, Tortosa, Lleida, and Andorra.

There will be an electoral register for each polling station and therefore members will be able to go and vote at the station assigned to them via their residential postcode. The Club has already established a web page with all the information relating to the elections and it can be consulted on line with voting stations already assigned. Members with the right to vote number 110,522 of which 40,347 are aged over 60. 93% of voters live in Catalonia, 4% in the rest of the Spanish State and 3% abroad.

The Managing Commission made it clear that during this period the Club will continue to work closely with the Catalan Government and the health and local authorities to organise the elections so that they can be carried out in the best conditions possible.