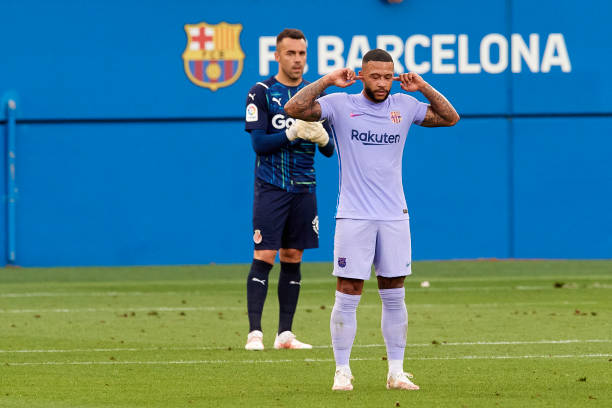 FC Barcelona defeated Girona 3-1 in its second pre-season match ahead of the 2021-22 season, courtesy of goals from Gerard Piqué, Rey Manaj, and Memphis Depay on his debut for the club. Ronald Koeman, Memphis, and Nico González spoke after the match.

On Memphis’ debut for the Catalans

“Memphis has played more minutes than planned, but he is a player of a lot of quality. He has shown it at certain moments of the game, and it is important because in the positions up front you have to have competition, and this is very good.”

On his team’s performance against Girona

“I think the game has had more rhythm. Also, our opponent Girona is a good team that tries to play, and it has been a good game being a preseason game. There was rhythm, a lot of play on both sides, and very happy for many players who have played more minutes of the game, and the last ones who have joined have had their minutes. Everything is very positive.”

On the players returning to the squad from holiday

“There are players who are there to have more minutes, others like the internationals could not play more than thirty minutes. Little by little we will give more minutes, especially to try to be prepared for the first LaLiga match.”

On the youngsters playing for the first team

“It is very good that they take minutes and experience. It is a trajectory that we have started and it is not finished, but despite being young they have a lot of quality to be there.”

On his debut for Barça

“It’s incredible. I’m very happy to play in this shirt and have my first minutes. I have really enjoyed it. The fans have been very enthusiastic, energetic, and I liked seeing them in the stadium. I’m very happy.”

On the expectations placed on him at the club

“It’s normal. We are at Barça, and everyone expects a lot from everyone. I work hard and hope to have great moments with the fans. I play football to entertain the fans.”

On looking forward to playing at the Camp Nou

“Starting here is good, but I’m sure it will be incredible at the Camp Nou. I will try to transmit my energy to the team. It is an impressive feeling to be with the fans.”

On what he intends to bring to the first team

“I hope to bring a lot of creativity. I always try to find the spaces between the lines of defense, in addition to goals and assists.”

Here is what Nico had to say:

“They are very good people, and they have welcomed all the young people very well. I am very comfortable and very happy. I’ve been training very well, and I hope to have more opportunities like this one.”

On the team’s performance against Girona

“At the beginning, being a preseason game, it is harder to start, but we had some very good minutes with the goals and most of the chances in the first half. We have locked them in quite a bit, and we have had very good feelings.”