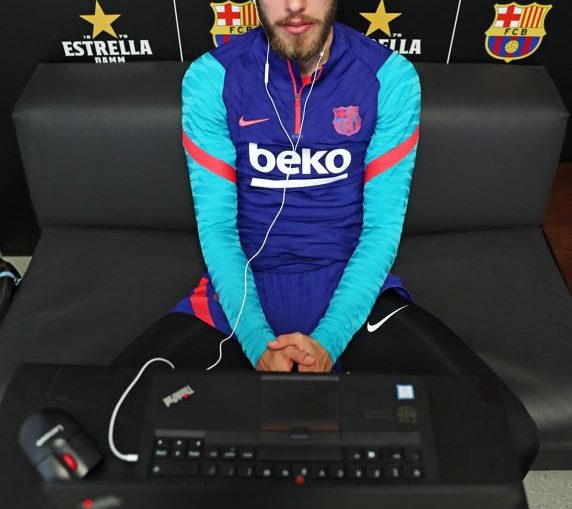 Óscar Mingueza has risen through the ranks and has made himself a prominent member of the Barcelona defense with some big performances this season. He sat down for an interview with Mundo Deportivo, where he talked about playing in the Clasico, the cup final, his rise in the team and much more.

If they told me a few months ago, I wouldn’t have believed it, but it is a reality now. A Clásico that was a shame since we didn’t get a win, but we are focused on the Cup final. We will try to come home with the title.

Before you start talking about the changes you have had in your life in the last year, the change of look, is it to intimidate or an urban legend?

They are things that are said, but it is not true. Yes, I used to joke with my father sometimes, but…, now less, before with short hair it was more. I combed my hair more, but I always like to be well-groomed and perfumed.

Let’s talk about football. How has Óscar Mingueza changed to reach the first team?

I’ve already been doing a lot of work. Changing my physical form, trying to gain volume, taking care of my diet, the hours of sleep. I have been more strict. And I have focused a lot on the tactical issue, reviewing the games, analyzing my plays to improve. Then technically, I always try to progress in training and then I have also tried to improve the mentality: the issue of aggressiveness, looking for a positive part when the game does not go well, a motivation to transmit it to the team.

You have also taken assistance to advise yourself, with the consensus of the club. Physical trainer, nutritionist and also sports psychologist. Why’s that?

It’s something I’ve been thinking about for a long time, especially on the physical issue. When I made the jump to Barça B and things were not going well, they recommended that I go to a physical trainer and, above all, attend something that I had not heard much about: a sports psychologist who has helped me a lot on my way.

Do you think there’s still a certain taboo with psychology in football?

In other sports like tennis or golf, individual sports, perhaps it is more integrated. But it can also help you in team sports. It has personally helped me a lot.

Especially in the elite? Because the jump from B to Barça is very important.

In the end, whether you are a big or small personality, it is always good to be well advised by a professional. Anything that is helpful is good.

You’ve always had to vindicate yourself. Do you feel like an example for the youth players?

I don’t consider myself an example either, but I always try to help them. I hope my story helps to motivate them to keep working and dreaming. I knew it was very difficult, but be it here or elsewhere, you can get to professional football. Yes, there is always the hope of playing here, but in the end there are many things, a lot of work and talent, a lot of sacrifice.

Also, do you think it is important to be stubborn, because you’ve had options to leave Barça, even when you were not playing in the B team?

Yes, it is true that I was a bit stubborn. But in the end I was no longer so focused on staying, I changed my mentality a bit and it was to give 100 percent in everything to be prepared to play wherever: in the B, in the first team or if I had to go somewhere else.

Having tasted the experience of playing in the first team, I guess you will not leave Barcelona anytime soon?

In the end, nobody knows. Yes, I hope I can be in a first team, if it can be in the top. After all, you want to play for the best teams and the truth is that I’m happy here.

Barça want to renew your contract, they are going to run the two optional years. For now, do you wish to make a career here?

Everybody dreams of being at Barça. The contract issue will be discussed and it is up to my representatives. I am focused on playing.

Well, we are going to talk about football and the Cup final. How do Barça get there after falling short in El Clásico?

It is a hard blow. We did not have a good first half, although I think we had a lot of spaces, but we knew how to react, both tactically as well as at the level of play, of desire, of motivation. We changed the chip in the second part. We have the feeling that we did it all. I hope that for everyone it will be a reinforcement and an extra motivation to face the final.

So, does the team carry the positives from the second half of the Clásico to the final?

Yeah right. In the end it is what the team needs. It is the attitude we have to show if we want to win this Cup final.

What kind of Athletic do you expect, since they aren’t having a good run of form either?

We know that Athletic is a very powerful team, with fast and strong players. A very complete rival. We have played several times against them and they have always made things difficult for us, but we will try to play our game.

They beat Barça in the Super Cup final. Is there a desire for revenge?

Yeah right. It is a ‘thorn’ that stuck in us, but we will try to get it out by winning this Cup.

What worries you the most about Athletic?

They have very good players and they can hurt us both on the inside and on the wings, with very powerful full-backs. They are doing well in the air, behind the back… They are a very complete team and we will have to be very attentive.

Have you prepared for the final in any special way?

Like every game. We try to analyze what they do well and adapt a little to their game, but above all, to have our personality when it comes to defending and attacking.

Have you done any activity with the group to make the team bond better?

We haven’t done anything special. Yes, the dressing room has been very close this week. The whole team has been together.

The Cup final is always special. A shame not being able to play it in front of the fans?

I have not been in a Cup final as a fan, but I have been in playoffs cheering on Barça and now it’s special to be able to experience it on the pitch. I hope everything will be just fine.

After the match against Madrid, do you hope to be a regular starter?

That is decided by the coach. I will give 100 percent, whether on the field or away, and to help in the minutes I have, be it few or many.

Playing without an audience, does it help young players?

Without an audience everything is equalized a little more, but also the motivation that the fans give you is extra. We hope that soon we can compete in front of our fans. I really want to be able to play with the fans in the stadium.

Which players have helped you the most in the first team in this integration?

I have taken things from everyone, but those who have been here or at La Masia for a long time. Jordi Alba, Busi, Leo… Ter Stegen and Lenglet also came to talk to me in the first match with words of confidence. That’s nice and much better for your game. Apart from giving advice, they also include us and put us on the ball.

Worst rival with the first team?

Athletic in the Super Cup was a rival that did us a lot of damage and cost us a lot.

The most difficult player to stop as a defender?

Phew! I have had a difficult time, uh… Mbappé, Vinicius…

T-shirt that you have exchanged that makes you especially excited?

I have exchanged with those I have met in grassroots football. Oriol Rey, Álex Blanco, Bobby, from Cádiz, Kike Saverio, when he was in Osasuna. I keep them with great pride.

Your best friend in the locker room?

The player who has surprised him the most?

Win the Champions League and the World Cup. The aspirations are the highest and I hope to achieve them.

Best coach in the lower division?

Quique Alvárez, who was also a central and helped me a lot, Jordi Font, to whom I am very grateful because he signed me, and García Pimienta, with whom I won the Youth League and got me up to Barça B. Even though I didn’t play, I knew I had confidence in me and it has helped me a lot.

Hobbies outside of sport?

Spending time with family, my partner and my two dogs. And playing with my friends on the computer. It’s the way to have contact with them now that we can’t see much of each other.

Are you one of those who answers WhatsApp?

Now I have many messages, but before it was difficult for me. Even my father tells me: “I don’t believe you answered.”