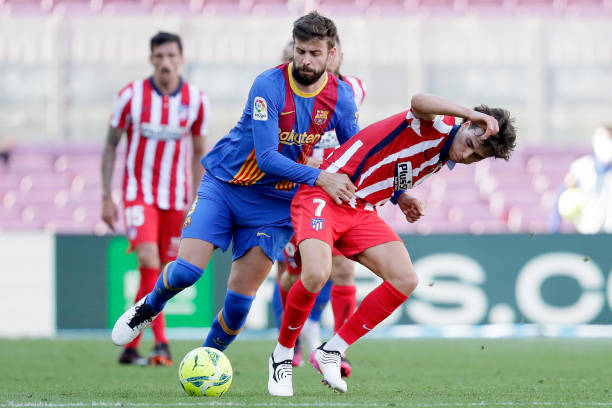 Here’s what Barça’s assistant coach Alfred Schreuder had to say:

On the match and the team’s performance

“If you play at home you want to win, and if you don’t, you are disappointed. In the second half we were better. I think we also started the game well but when Busquets went off injured, we lost a bit of control in the middle of the field. But in the second half we improved and went for the goal as you saw. At half-time we said that we had to move the ball faster and from side to side and speed up the game, and we managed to create more pressure on their defense.”

“We will have a chance if Atlético drop points. What we have to do is try to win all three games. Now we are two points behind Atlético and that is the reality.”

“Well, they are two good, powerful teams. We do not have to analyze previous games, but today’s. And today we were not able to win the game.”

On how Busquets’ injury impacted the game

“He is a player who gives us confidence and I think we lost our organization a bit. In the second half, I think we changed the midfield and we were able to play better.”

On this being a step back for Barça’s title hopes

“We know we have to wait. Now, we have to focus on Tuesday and see how the others do. It is clear that we depend on what other teams do.”

Here’s what Ronald Araujo had to say:

On the draw against Atletico

“We wanted to win the three points to fight for LaLiga, take the game to Atleti and be up there. They were very close behind and went very quickly upfield with Carrasco and Correa. We tried to stop their game a bit and then play our game. But hey, we have to continue, there are still three games left, mathematically we have chances. We are Barça and we are going to fight until the end.”

On his potential scoring chance but Lenglet jumping in front

“I’m still thinking about that play, because I entered the box alone, in front of the goal, it is a pity. Clement plays it, it is a very fast play, but a pity, maybe it was a goal, three points… a pity.”

“We are Barça, we have a good team and a good squad, and we are going to fight until the end. It seemed that we were not going to be able to fight for it at one stage, but today we are close and we have to fight it until the end.”

Here’s what Gerard Piqué had to say:

On the result and Barça’s title chances

“We hoped to win, that the result would be better. We are still alive. We played a good game, we competed, we had better chances than they did. We could not manage to win and we know that now we do not depend on ourselves. But seeing the results of this season, LaLiga is still open.”

On the Atletico defense and Barça’s chances

“We knew the opponent we were playing against. Atletico is a team that defensively can be the best in Laliga. They have conceded the fewest goals and it is hard to create chances against them. And if you get clear chances, you have to take advantage of them. The one for Leo in the first half that Oblak saved with his fingers, and then in the second half for Dembélé. We have created chances to score.”

“It was a very competitive match. In some phases, we had more of the ball and in others they dominated more. In the second half, we were better, without having much control, but we created chances. In the first half, they had more chances. Anyone could have won.”

“Everything. Because of what has happened in LaLiga, the situation can change. If Madrid win their four games, they are champions, but they are having a hard time maintaining regularity. If we win all three games, we still have a chance.”

On if Barça still stand a chance

“I don’t have a crystal ball, but as a club and team, we must compete until the end. In the last twelve or thirteen seasons, we have competed until the last game and that is what we are going to do. We have been competing since the beginning of the year and we have been able to compete well. It has just been a matter of the last few games.”