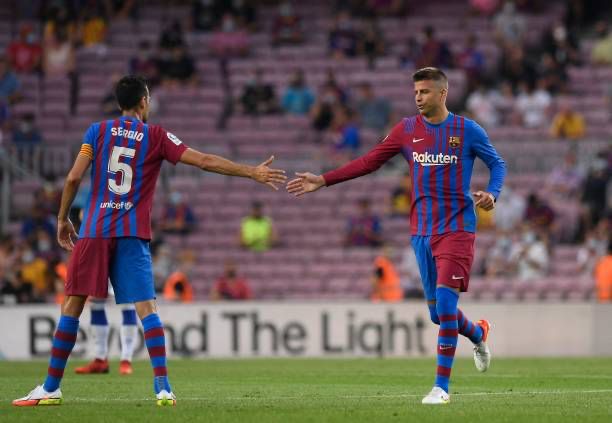 Gerard Piqué and Sergio Busquets spoke to Movistar + on Friday ahead of Sunday’s El Clásico where they talked about the upcoming game, Ansu vs Vinicius, Benzema, and a lot more.

Here’s what Piqué had to say:

“A Clásico, in a way, is more than three points and more than a simple game. Winning against your eternal rival gives you strength, courage, and confidence, which are very important in sports. If we can beat Madrid, we would show that Barca can compete in the league. The game is important and we are coming into the game in good form.”

“There are no favorites in El Clásico. This has been proven before, I think both Barca and Madrid are doing well. Barca has overcome the moment of crisis. We are recovering, in La Liga and the Champions League.”

“Barca needs more players like Ansu, goal scorers. Especially when the most influential player in the club’s history has left. But you have to be realistic with the kid. He is 19 years old, we must win games as a team and Ansu will help with goals.”

“I think he has occupied Cristiano’s space perfectly. He now plays in the position which suits him best. He is much more than scoring goals. Benzema has been excellent in the past few years. It’s going to be a fun battle and we’re going to have a good time.”

Here’s what Busquets had to say:

“Winning would give us confidence and allow us to get closer to the top of the league. We are not that far from Madrid, only 2 points. There are a lot of games left, but this win will give us a lot of confidence.”

“We must focus on ourselves. Barca has been inconsistent in La Liga and the Champions League. Then image needs to be better, more consistent if you want to compete in all competitions.”

“We must be better defensively and in front of goals. But there are many more aspects.”

“He has recovered and it is a huge joy. But we must be aware of his age and his situation. Ansu hasn’t played for almost a year. He must go step by step and we must help him out. He is capable of contributing goals but he should not be burdened with pressure.”

“Ansu and Vinicius will mark the futures of both clubs. Clubs like Barca and Madrid are always going to have great players.”

“He is at a very high level, with Madrid and the national team. He is a top player. Madrid does not only rely on Benzema and Vinicius, they have a great team. Barca has their weapons too.”