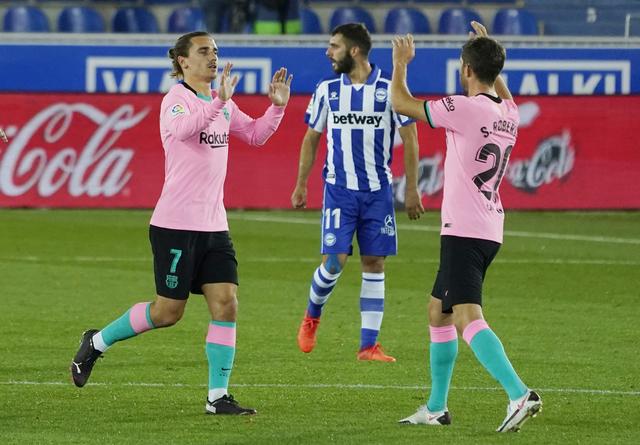 After another disappointing result in the league, this time against Deportivo Alavés, Ronald Koeman, Antoine Griezmann, and Frenkie de Jong all spoke to the press after the final whistle.

The game in Vitoria was dominated by Barcelona, but luck did not seem to be on their side. Koeman, Griezmann, and de Jong all rued the opportunities the team had to win the game and felt that a draw was unfair to the Catalans.

On his team’s performance:
“I am concerned about the efficiency of my players in attack. It is not a matter of attitude, it is not a matter of concentration, but we do have to score more goals, it already happened to us against Juventus and now against Alavés. We have also given the goal to Alavés. It cannot be accepted that we fail so much.”

On the improvement in the second half:
“In the first half we were very weak and even so we have had two or three chances. The second half was much better.”

Fati’s substitution:
“One day you criticize me for changing late and now at halftime I made changed. Fati had his chances. I was looking to change things.”

On his body language toward the end of the game:
“Are you going to criticize me for my image? We tried everything. We played as we have to play. If you criticize me for that, I’ll quit (the interview).”

On the club’s bad run in the league:
“Of course I am concerned that we only added two points in the last four games. The game was very acceptable. I’d be more concerned if we didn’t create opportunities.”

Opinion on the refereeing:
“I prefer not to give an opinion.”

On whether he understands the anger of the fans:
“What I have said does not need to be repeated.”

On whether the team needs to shoot more from outside the box:
“Yes. Sometimes we search too much for the final pass. We took long shots several times, but there was always one leg in front (to block the shots).”

Here is what Antoine Griezmann had to say:

On the feelings the team leaves the game with:
“Angry, with rage. We wanted the three points, we have a lot to improve. It is time to continue working. We had many chances, but we only scored one goal.”

On the team missing more than twenty shots:
“The truth is that we are missing a lot. I am the first to miss, but the season is very long.”

On finally scoring:
“I was missing a lot and the team needs my goals. I don’t usually miss many times, but lately I have. I know that I have missed important chances at the start of the season.”

How he feels:
“I feel fine. I am enjoying and trying to work to improve.”

On being 8 points behind the leader in the league:
“We are not well in the League. But you have to go calmly. Only with work can we move forward.”

Here is what Frenkie de Jong had to say:

On the possible penalty in the first half:
“I thought that someone pushed me from behind, but I couldn’t see it. It felt like that (a push).”

On the team’s efforts tonight:
“Especially in the second half, we were pressing them a lot. We created lots of opportunities, but we were maybe a bit unlucky, I don’t know.”

On whether the team is improving:
“In the second half, yes. The first half was not good enough.”