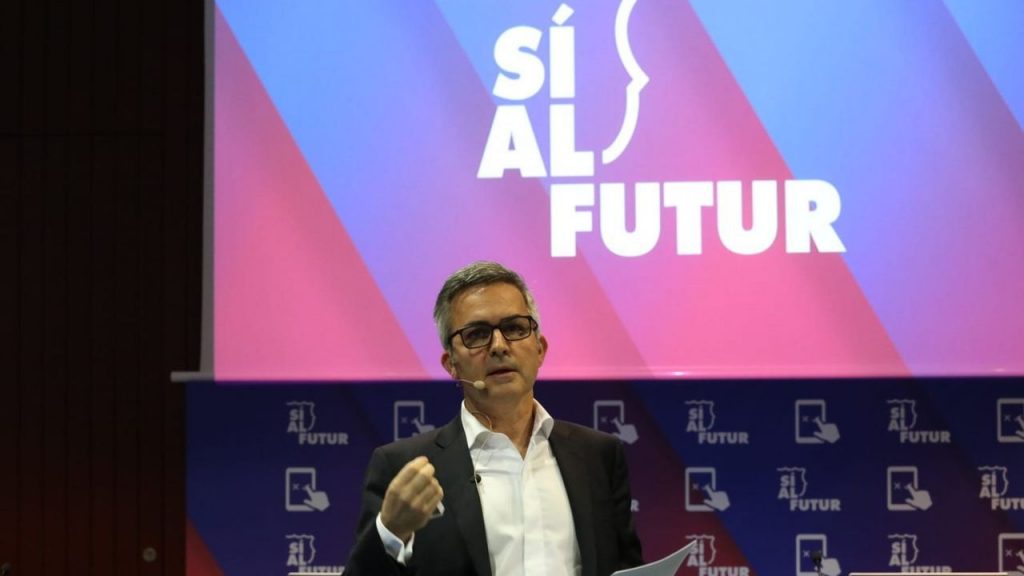 Víctor Font, one of the presidential candidates for next year sat down with SPORT where he talked about Barça’s new manager, current situation at the club and about his plans for the future.

Ronald Koeman was introduced as the new Barça coach. What do you think of this decision?
“Considering the current state of the club, changing a coach doesn’t solve the sports, institutional nor economic crisis that the club is going through”.

Here we are talking about a legend of the club in Koeman.
“It is true. We must thank Ronald Koeman to take over the responsibility in this complicated time. I wish him all the luck. He has the personality to coach a team like Barcelona, He belonged to the Dream Team by Johan Cruyff”.

But will he remain the coach if you win the election next year?
“I have read headlines out there where it has been published by changing my words that even if Barça win the treble next season, he will not remain as the manager.
We believe the current club project isn’t built solely around a name for the next ten years. The Barça coach plays a crucial part but he is as important a figure as a complete team. If we have to achieve the maximum success in this decade, we need to follow a sports project that goes from the sports vice presidency to the coach of the youngest, a solid structure”.

Your proposal for the short term?
“We stood by our solution. I really hope that Koeman and Barça can win the treble. I’m sure that Xavi, who is a key part of our project, will know how to find a place for the talents created by Koeman.

It seems you already have the manager ready in Xavi, have you chosen the sports vice president and technical secretary as well?
“Yes, we have. The vice president will be a former player with an extensive experience. ‘Sí al Futur’ is a result of seven years of hard work, it is not a candidature campaign which has been started six months before. We have twenty executives, a CEO and a very ambitious organization covering all areas. We have a very well detailed project.”

It is clear that the newly appointed technical secretary Ramón Planes will not continue under you.
“We will see. It is quite incredible that the newly appointed coach has to work with Planes, one of the people who is mostly responsible for the erratic transfer decisions of recent seasons, a professional who has to report to the sports vice president, who is president Bartomeu himself and these are the people who are behind this sports crisis. The truth is this doesn’t make any sense.”

The club can not stop, the work must continue.
“The present sports direction team is not entitled to make decisions that will have a strong impact in the coming years. What if the new technical secretary and coach who comes in 2021 believe that Luis Suárez or Gerard Piqué, for example, were still fundamental to make the transition and Planes and Koeman dismiss them? It has neither head nor tail. You have to have perspective, look beyond today, think about tomorrow and what is best for FC Barcelona.”

Are you afraid of loosing Lionel Messi?
“I think there is a huge risk and it gives me nightmares. Messi is an asset of the club, the most important player in the history of the club and goes beyond when Messi retires. The Messi-Barça association has to go further till the time he retires. It must be the reference image of the club and its worldwide growth”.

What do you think of the statements of Bartomeu?
“The statements were far from reality. I don’t know if he lives in a parallel world or what. His words were very disappointing. It is irresponsible to not resign and putting their personal interests ahead of Barça.
One more example that it is mandatory to change the club model. Bartomeu has not read the newspaper editorials, he does not hear what the partner says and thinks on the street. He has acted as if Rome, Anfield or Lisbon did not exist.
They have decided to continue till the end of financial year so that they can close the financial balance and thus limit the risk of someone taking action against them later stage. And I think they can also have enough time to promote their next candidate”.

Who do you think the next candidate from this board be?
“The information that we have is that they are trying to find a new candidate through Sandro Rosell and someone who is related to the current board of directors, such as Jordi Roche or Joan Rosell.
Of course, I say this with all due respect, any candidate can introduce themselves. Now, a candidacy to preside over Barça is like an Olympic office. It takes time, long work, planning, pedagogy, a detailed program. It is not worth saying, I am looking for a person who is the visible face and then we will fill in the content.”

What about ‘Sí al futur‘?
“‘Sí al futur’ has never stopped to be constructive. It took the major step in 2018 with the aim that in 2030 Barça will continue to dominate the footballing fraternity and owned by its partners”.

There will be an Assembly of Committee Members in October. What would you advise?
“I would ask not to approve proposals that involve or have an impact on the club beyond March 2021. I am talking about renewals of players, sponsors, the Camp Nou title holder. Nothing structural that could mortgage the club in the coming years . I already smell that they will want to score us a goal with Espai Barça. Make it a transparent Assembly, in a very special way about the current financial situation of the club.”

Thoughts about you and Laporta signing a pact?
It is true that there are many members who tell me it will be the best thing for Barça, but I think, Joan Laporta, who has been one of the best presidents in the history of Barça, belongs to the past and ‘Sí al Futur’, as its name suggests, is a project for the next ten years for the club. Joan Laporta and I have a similar look and we get inspired from the same source, Johan Cruyff, in an simple way. This pact is a question that we have not even considered”

About Espai Barça.
“If we take into account that it was voted in a referendum in 2014 and in the best case scenario the Camp Nou works will not finish until 2025. We are talking about eleven years for it to be a visible and palpable reality. Really, it is a complete nonsense. I remember that Bartomeu made the promise that the new Palau would be ready in 2019 and we are in 2020 and the works have not started yet. One more example of the mismanagement of this board of directors in recent years, which has led us to lack financial muscle. They should have been much more careful but they haven’t been”.

About improvements required.
“The sports spirit of FC Barcelona is in its DNA and we are not going to neglect our identity. We would not eliminate them, quite the contrary. We have a very ambitious project to promote it. To begin with, we want women’s teams in all sports disciplines. And we will create more sections. And as each one of them has its own reality and needs, we will make sure that each one of them is managed as if it were a club. When Rosell referred to eliminating them, he did so thinking about the economic cost they have, but for that is the ability to generate new and more resources, to make this new club model sustainable”.