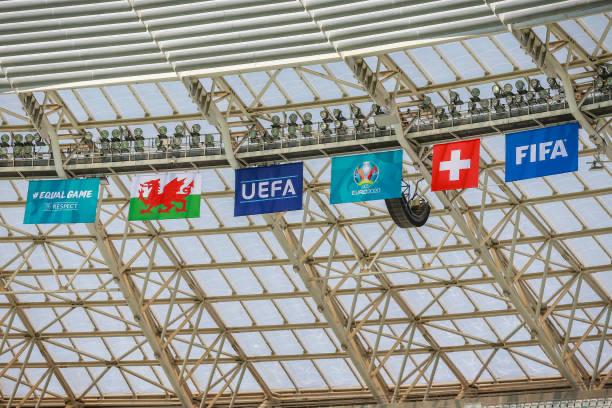 Read Blaugranagram’s live commentary for Wales vs. Switzerland, the first of three Euro 2020 matches on Saturday.

The Welsh and Swiss national teams go head-to-head in Baku, Azerbaijan today in the second match of Group A. Follow our live commentary to make sure you don’t miss out on any of the action!

Wales’ starting line-up: The Welsh will begin the game in a 4-3-3 formation. Daniel Ward starts in goal for Rob Page’s Welsh side. From left to right, Tottenham Hotspur duo Ben Davies and Joe Rodon, Chris Mepham, and Connor Roberts compose the back four. Joe Allen, Joe Morrell, and Juventus’ Aaron Ramsey will run the midfield. Real Madrid’s star winger Gareth Bale will captain the Welsh after a loan with Tottenham, and he’ll be accompanied by Kieffer Moore and Manchester United’s Daniel James up front in attack.

Switzerland’s starting line-up: The Swiss will line up in a 3-4-1-2 at kick off. Borussia Mönchengladbach’s Yann Sommer will be between the posts for Vladimir Petković’s men, and he’ll be protected by club teammate Nico Elvedi, Borussia Dortmund’s Manuel Akanji, and Fabian Schär. Ricardo Rodriguez, captain Granit Xhaka, Remo Freuler from Atalanta, and Kevin Mbabu compose the midfield. Liverpool’s Xherdan Shaqiri, who scored one of the goals of the tournament of Euro 2016, will start as a false nine behind forwards Haris Seferović and Breel Embolo.

14′ – Yann Sommer with a HUGE SAVE to keep Kieffer Moore’s header out of the net. Wales has a corner.

15′ – Moore and Mbabu collide on the corner and go down in the box. It will be a Swiss free kick. Moore, who is bleeding from his forehead, comes off to receive medical attention but will resume playing once ready.

20′ – Ward kicks away Schär’s attempt on net. The Leicester City keeper comes up big for Wales to keep the match scoreless.

21′ – The Swiss look dangerous attacking down the wings. Mbabu and Rodriguez both sent crosses into the box, but nothing was made of the chances.

24′ – Switzerland continues to apply pressure to Wales. Connor Roberts does well to head a cross away from goal to relieve the Welsh defensively.

26′ – Seferovic just misses the net! He did well to turn away from the Welsh defender in the box and take the shot with his left foot on his second touch, but the ball sails past the top left corner.

29′ – After a promising start from Wales, Switzerland has dominated possession and the game for the past 10 minutes. The Swiss continue to play in Wales’ half.

30′ – Wales free kick! Daniel James bursts down the left wing and is brought down just outside the left side of the box by Fabian Schär. Bale will take the free kick.

31′ – Bale curls a cross into the six-yard box, but the Welsh forwards don’t react quickly enough to get on the end of it.

33′ – Freuler whips in a cross from the left wing that is headed away by Davies for a Swiss corner.

34′ – So close from Switzerland! Akanji just misses the near post, but Switzerland will retain possession—as it has for most of the game—in the midfield.

41′ – Seferovic has a decent look at goal from the top of the box, but he sails the ball over the crossbar as he was off balance. Despite the number of chances Switzerland has had, they haven’t created anything truly threatening for the Welsh.

42′ – Mbabu draws a free kick for Switzerland from about 30 yards out. He’s down and receiving medical treatment but appears to be okay. Shaqiri is lining up for the free kick.

43′ – Shaqiri sends the ball into the six yard box, but Bale clears it away for a Swiss corner.

44′ – Switzerland is unable to convert on its seventh corner of the first half.

45′ – Seferovic misses from the six-yard box! Embolo does superbly well to hold up the ball in the box and lay it off to Seferovic to his right, but he puts it wide. Embolo pleads for a penalty, but the referee says the defending against the Swiss forward was clean.

45′ – The referee blows the whistle for half time! The score remains 0-0 after Switzerland is unable to convert on long spells of possession, seven corners, and a handful of chances inside the box. We’ll have to see how the managers plan to change the game for the second half.

First half stats: Switzerland dominated the half with 68% possession, 11 shots, and 285 passes. The Welsh, on the other hand, only had two attempts on goal and 100 completed passes. Something has to change for Rob Page’s side in order to get forward, and Switzerland has to continue finding men in the box and being composed while finishing. The Swiss could easily be up by two or three goals if they didn’t snatch at their chances in the box.

48′ – HUGE chance by Embolo! Displays great skill to turn, split his defenders and get a shot away for a corner.

49′ – GOALLLLLL!! Embolo buries a header on Shaqiri’s corner to give Switzerland the 1-0 lead in Baku! That’s the sixth international goal for the 24-year-old forward.

51′ – Breel Embolo has taken over the game. He receives the ball from half, dribbles his way into the box, and lays it off to Mbabu who shoots wide of the net.

55′ – Daniel James is almost through on a breakaway for Wales, but he can’t get past the Swiss defense.

56′ – Wales has its first promising attacking opportunity of the half, but a cross its headed away and cleared out of the box.

57′ – Daniel James continues to be the biggest attacking threat for the Welsh as he sends a cross into Switzerland’s box, but Kieffer Moore’s shot is blocked at the top of the box.

58′ – James wins a corner for Wales. Embolo, who tacked James to send the ball out of play, is down receiving medical attention after the play.

60′ – James’ cross finds its way to Ben Davies at the top of the box, but his shot is deflected over the crossbar and goes out for Wales’ third corner of the game.

61′ – Gareth Bale tries to take on the Swiss midfield but is tackled in possession.

62′ – Mbabu receives a yellow card for a slide tackle on Daniel James. Free kick for Wales from the left side of the box. Aaron Ramsey is lining up for it.

63′ – Wales can’t manage to make contact on Ramsey’s free kick delivery, and it goes out for a goal kick.

64′ – Embolo ALMOST has his second goal of the game, but his shot just goes wide of the far post.

70′ – A poor pass from the Swiss defense goes out of play for a Wales throw in.

71′ – Wales is seeing a good spell of possession right now. Passing is mainly going side to side, but let’s see if they can find a way to get forward.

72′ – Wales wins its fourth corner of the game.

73′ – GOALLLLLL!! Kieffer Moore scores a header to level the game for Wales! Joe Morrell plays the ball in from the top of the box, and Moore perfectly directs it into the far post. The score is tied 1-1.

74‘ – Wales substitution: David Brooks comes on for Daniel James, who appears frustrated to be leaving the field at such an important stage of the match.

76′ – Zakaria whips a cross into the box for Embolo, who can’t manage to convert on the play for the Swiss. Despite the attempt, momentum has shifted into Wales’ favor.

78′ – Ben Davies sends another shot over the crossbar. Wales is enjoying this spell of possession, and some Swiss players are clearly displaying frustration.

82′ – David Brooks and Gareth Bale combine on a quick one-two on the left wing, and Brooks’ cross into the box just misses the foot of Aaron Ramsey in the six-yard box.

83′ – Switzerland substitution: Mario Gavranović comes on for Haris Seferović, who was unable to score despite a number of good chances in the box in the first half.

84′ – GOALLLLLL!! Mario Gavranović buries his first touch of the game to make the game 2-1 for Switzerland! The goal will be checked for offsides.

85′ – VAR confirms the goal has been disallowed for offsides. What an entrance it would’ve been for Gavranović. The game is still tied 1-1.

87′ – Gavranović receives the ball in the midfield and takes a shot wide of the net, but he is ruled offsides once again.

89′ – Embolo’s header off of Rodriguez’s corner is spectacularly saved by the hand of Ward. Switzerland will have its tenth corner of the game.

90′ – Brooks plays the ball out of play for Switzerland’s eleventh corner.

91′ – Five minutes of stoppage time have been added.

91′ – Gavranović turns and shoots in the box, but he is ruled offsides for the third time. It would’ve been a corner.

93′ – Embolo wins another corner for Switzerland. It falls to Xhaka, who plays the ball back into the box, but is safely saved by Ward, who is a man of the match contender.

95′ – The final whistle blows, and that’s the end of the game! Wales vs. Switzerland ends 1-1 after a match jam-packed with action.

Switzerland’s will take on Italy in its next match, and Wales will play Turkey. Both matches are on Wednesday, June 16.