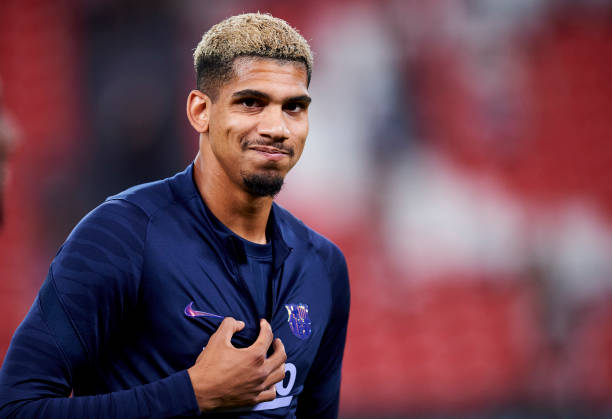 According to ESPN, the Uruguayan defender whose current contract is up in the summer of 2023, is expected to sign on improved terms which will tie him to the club for the next 5 seasons.

Having joined the club initially as a B team player from River Boston in Uruguay for a fee of 1.5 million in variables plus 3 million in add ons, the central defender quickly established himself as a key player for the Segunda División B side before making his debut for the first team a year later in a 4-0 win against Sevilla. Ahead of the 2020-21 season, Araújo was promoted to the first team and handed the number 4 jersey formerly worn by Ivan Rakitic. A promising season followed in which the Uruguayan staked his claim for a starting role in the Barca first XI as well developed as a player. With Pique approaching the final few years of his career, the club hopes to turn to Araujo as well as new signing Eric Garcia, to form up the new generation of FC Barcelona’s defence

The renewal of Araújo will be the enactment of a plan by the Catalan club to secure the contracts of several payers deemed to be the future of the side. Avoiding a reoccurrence of the situation which saw La Masia talent Ilaix Moriba leave the club will be imperative for the sporting project going forward. Having come to an impasse on renewals with the teenage midfielder’s camp, Barca were faced with two choices; confine Ilaix to the stands for the remaining year of his contract or accept an offer for him for a sum between 15-20 million euros. Ilaix eventually ended up leaving for 16 million euros plus 6 million euros in add ons.

Araújo’s current situation is mirrored by the teenage super-talent duo Pedro González and Ansu Fati whose contracts both end in 2022. Barca is fairly relaxed in its approach to renew the duo as they reserve the option to trigger clauses in both contracts which will extend them until 2024, however the representatives of both camps want the futures of their clients to be given more definitive solutions for the coming years.

The club’s position regarding its young and promising core is clear. With FC Barcelona in rebuild mode, the youngsters will be called on to step up and play a part in keeping the Blaugrana competitive as they attempt to repair the dire financial and footballing situation it finds itself in. Ronald Araujo, amongst others, will have a very key part to play in this.