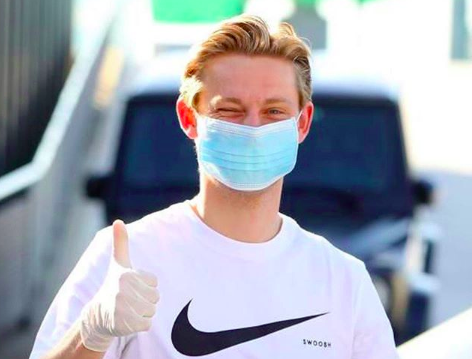 Following the coronavirus tests conducted Wednesday, Barcelona’s tested players have all been declared free of the virus, as they look to return to action.

As part of the preparations for the gradual return to the pitch for professional footballers, coronavirus tests have to be conducted.

The plan for Barça remains to start the individual training sessions at the club’s facilities tomorrow, and for that to happen, medical tests had to take place. The club’s social media accounts posted several pictures and videos of their players arriving at the facilities Wednesday, wearing protection masks and gloves.

Since then, on the same day, medical tests were conducted. The tests were done to both to check up on the players’ physical form, but also to check whether they were infected with the coronavirus.

Riqui Puig, whom Barça bet on for the midfield next season alongside Carles Aleñá, was among the youngsters who joined the first team in the prevention tests, and he would reportedly be joined by Ansu Fati, Iñaki Peña, Ronald Araujo, Álex Collado and Monchu.

Fortunately for Barcelona, the tests came back negative for all of the club’s tested players, reports the Catalan news outlet, RAC1. This means that Barça, without obstacles, will be able to train again at the Ciutat Esportiva Joan Gamper, tomorrow.