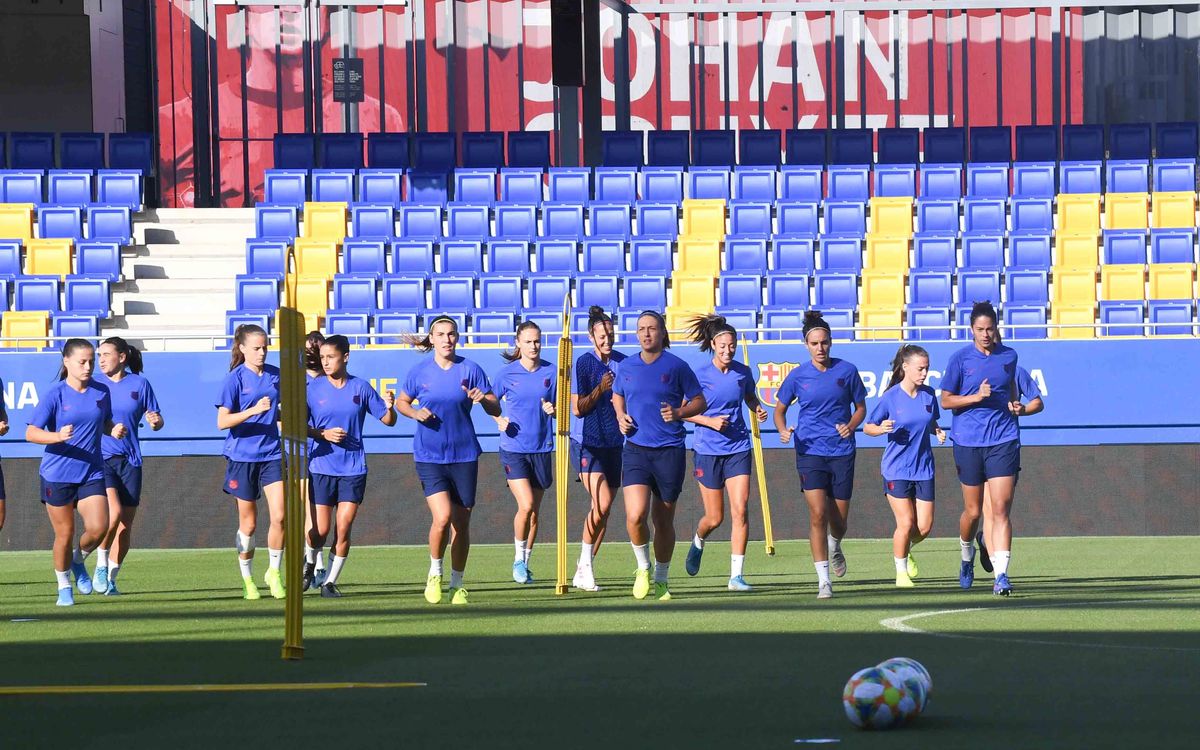 This article was originally written in Catalan by Natalia Arroyo, an outstanding analyst and coach, for the Catalan newspaper Diari Ara, and was later adapted to English to gain more diffusion by Blaugranagram’s editor, Aina Canales.

After the Champions League Final in Budapest, the players understood that they had to dedicate more hours to training for them to leap.

A solid loss will be the beginning of an impeccable streak of victories. When Barça confirmed that they were too far from Olympique Lyon’s level at the Champions League Final in Budapest, a year ago, Barça will see the improvement direction they had to take: “They [OL players] are faster and stronger than us. We have to train more to close the gap between both teams,” the dressing room admitted, frustrated after not being able to stop Hegerberg, Marozsán, Bronze, Le Sommer o Van de Sanden.

The lesson of May 18, added to the feelings of being close but not able to do anything against the most powerful teams in the World Cup, will mark a new objective on the players: become like them. The ambitious group draw the path which months later, proceeded in Lluís Cortés’ side into the most powerful team of Primera Iberdrola (RFEF confirmed the title after the early ending of the competition) and one of the deadliest teams in Europe, mostly at home. They ended the season without losing a single official match, with an average of 4,1 goals per game and only 0,3 against. Lyon and Wolfsburg, unbeaten too, were at 4,2 and 2,6 goals per game in their leagues, respectively. The improvement is clear compared to last year when Barça scored an average of 3,1 goals and conceded 0,5.

What is the secret of this quality leap? “The principal reason is that the players are receptive. They were the first to accept the need to train more,” Lluís Cortés recognized. This is an important point. The quality of the reinforcements to make the difference (with Hansen and Oshoala), the painstaking tactical work, both collective and individual (with more analysis work from the technical staff and more specific work hours from the players) and a more detailed control on the nutritional aspects, have completed the change. “Most of the players assure that they are in their best sporting moment,” it is recognized at the Ciudad Deportiva Joan Gamper. And it is no coincidence.

97 more hours on the field

After the 10-1 win against Real Sociedad in the Spanish Super Cup, the coach acknowledged that if Barça was better, it was mainly due to the increased workload compared to previous years. The Barça club closed the first half of the season (counting until December) with 97 more field hours work and 12 more hours of strength work than during the same period of the previous year.

On training days it implies that 14 more sessions have been done compared to last year, but without necessarily affecting the rest days of the players. The volume of double sessions has been increased (15 more, in which more friendly matches have been included) and the passage through the gym has been almost doubled (33 more visits) to add strength work. Attached to a more controlled preseason than when the team travelled to the United States, the increase is more than substantial.

But increasing the volume of work does not necessarily have to lead to improvement if the quality of the training does not allow taking advantage of the increase in quantity. And this is where Barça puts the magnifying glass and takes out his chest. The players’ GPS data shows that the team is now making more efforts at high intensity than before. The distance covered in a match, more or less, is similar to the one from before, but now footballers give much more conditions ​​than 24 and 21 kilometres per hour than before. That is, they sprint more and maintain a higher pace for many more meters. Their resistance is also better. “The incorporation of fast players has helped us raise the level,” says Berta Carles, the team’s physical trainer.

Another of the features in which the improvement of the workforce has been most detected is in the values ​​of weight and muscle mass. According to the club’s records, since professionalization in 2015, and on average, the team has reduced their fat percentages by more than 5%. At the end of this 2019, the team was 0.5% better than in the final in Budapest.

The explanation is clear: much more comprehensive nutritional monitoring is being done (through specialist Mireia Porta, who already joined in the middle of last season) and the biotype of the player who has joined the squad has changed. There is much more attention to the menus in the hotels and the food that is on game days. However, the current values bring the section closer to the parameters of other professional sports and break with a trend that warned of a slight overweight in footballers.

The footballing improvement of the female Barça is not exclusive to the players and has also been noted in the composition of the coaching staff, which is becoming more and more extensive. In the change from Xavi Llorens to Fran Sánchez, in 2017/18, the club proudly announced that new personnel were joining the team dynamics: in total, there were 8 people in the first team. Currently, Lluís Cortés directs a workgroup of 14 people, with an extra physical trainer to complement the work of Berta Carles (Jacob González, who comes from rugby and who takes the auxiliary part), two technical assistants (Rafael Navarro and Jonatan Giráldez ), the goalkeeper coach (Oriol Casares), two analysts (Toni Gordo and Alberto Angelastri) and a sports psychologist (Isabel García, former futsal player). Besides, there is a doctor (Eva Ferrer) and two physical therapists (Judit Valencia and Isabel Arbonés), and the delegate (Gonzalo Rodríguez) and the material manager (Rubén Jiménez) are full-time workers among the team.

The key, however, is not only that the staff is fitted with more people, but now everyone has very well defined their roles. It is common for analysts, the material manager, or physical therapists to help pick up balls, move mini-goals, or advise the irrigation superintendent of when to activate the system during training so as not to interfere with training dynamics. “Everyone has a role for the team,” insists Cortés. This synchrony allows to optimize the training time in the field much more and multiply the possibilities.

Having more hands allows the technical structure to take on individual jobs that previously cost more to fit into the team’s preparation schedule. Now almost every week the sessions include a specific training day. These are days of personalized tasks, aimed at correcting very specific aspects of the players: exercises for the central players, side situations for the ends and sides, game actions for the internal players, etc. “It is the small details that make the difference,” says the manager.

After each match every player receives a specific video with their performance, pointing out the things that they have to improve or that they must correct. “This individual part is having a very good reception, the players feel that they are improving and they like that,” admits Cortés. It is the same feeling that between the coaches, Berta Carles and Jacob González recognize from the physical plot: “The key to everything is that the player asks us for more. They are the first wanting to improve.”

In addition to individual reports and training sessions, the team has also sharpened its collective analysis work. The era of data has also overrun the offices of the Ciudad Deportiva Joan Gamper. Along with other departments of the club, hundreds of data are extracted from each game that allows Cortés to fine-tune the performance of his team. Thus, for example, it has recorded the occasions, how they occur and which players star them. The same with the occasions received, the volume of possession and effective time and much more data.

All in all, it is concluded that the team this year has an average of 22 shots per game when last year it was 16. It has also improved the record of recoveries, of which 43% are in the opponent’s field. On own area, the percentage of ball losses has been reduced (16%) and, in general, the team manages possession better: 51% of the times the team has the ball, it generates an attacking opportunity.

The explosive dynamic that the women’s team carried, has now been interrupted by the crisis of Covid-19, which has forced everything to stop. The break has cut the pace they were carrying but has not changed their ambition. The objective remains the same: to be able to make Lyon suffer if the final of last year is repeated.