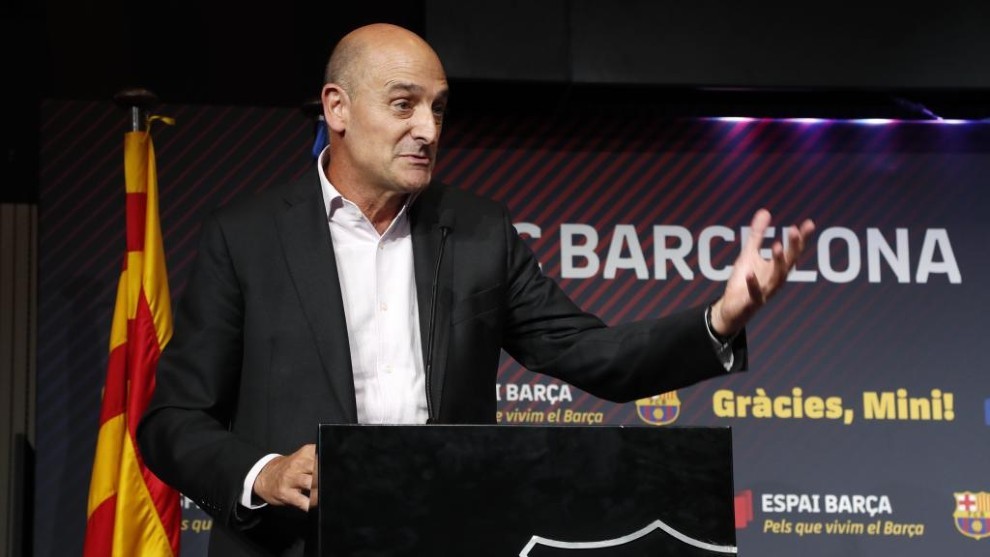 FC Barcelona economic vice-president, Jordi Moix, sat down with La Vanguardia for an exclusive interview in which the 59-year-old talked about his vision and the dream of millions of Culés, “The Espai Barça”.

On June 30, the accounting year ended, a very particular year due to the incidence of the pandemic. What would be the specific impact of the coronavirus on Barça’s economy?

The impact of coronavirus has been significant. It is affecting two essential elements of the day-to-day life of the club. First, it is affecting the ability to travel due to the restrictions that exist in tourism and therefore has a very direct impact on Barcelona and Barça in terms of non-match days. And a second aspect is that it is impacting mass activities. For all this of the forecasts that we had made for the whole year, from March 14, since we did not have activity in the stadium and when there was an almost complete drop in tourism, it has implied a reduction in income of around 20%.

Due to these circumstances, the projected budget for next year, which was 1,100 million, will be reduced to around 800. Is this correct?

We are fine-tuning the forecasts, with two important unknowns. One is that as we have played some league matches in July, those television revenues already correspond to the 2020-2021 financial year, and the evolution in the Champions League will also mark a part of this turnover, which we will have concluded when we present the budget in the assembly. And the second unknown is knowing when we can have normalized activity of total or limited assistance at the Camp Nou. We are working with a medium scenario of a forecast that this will be the case towards December or January. In this scenario, we are talking about 20 or 25% of the income that we will not have. And from 1,000 million, we will go to 800 more or less depending on all these parameters.

What are the main shock measures that Barça has implemented to curb the impact of this crisis?

During the confinement, we adjusted the salary mass of the players to balance the accounts as much as possible, although I anticipate that we will have an accounting closing with losses. It will not be a positive result, as is happening with the economy in general. To limit the impact we are working from three perspectives. The first, to work the income in the field of digital products, with Barça Studios or the trade of products over the Internet to try to compensate for the tourism deficits that we are having and that affects attendance at the Museum, for example. The second, in terms of expenses, we have established a COVID commission, where the vice president of the economic area, the treasurer and the president are, together with the general director and a part of the executives to have a weekly meeting to monitor the budget where everyone those expenses that are not essential then postpone them. Our obligation is to resize the club and the income statement at this juncture. And the third point is balance. As for the asset, we have ensured that all the collections that we had pending did not fail us. The positive here is that our sponsors continue to bet on us. As for the liabilities, the indebtedness that we have with the banks, we have sat down with them and we have reviewed the business plan. We have restructured the compliance schedule to have additional time, as many other entities have done. Despite everything, we remain optimistic.

Do you plan to make a new salary cut for footballers?

What we have to do is look at all the items and review the entire structure of expenses or income so that if we had to propose a salary adjustment it would be the last thing we would do. We have to see how we finish the market for the purchase and sale of players and how we are left with the volume of salary mass. We have 33 or 34 players, counting those who are on loan and come back, and the idea is to move to a squad of fewer players. We have been betting for a long time on our own style of football and on players from the quarry who are already arriving or who have arrived and who do not imply an investment in terms of transfers, as are the cases of Riqui, Ansu Fati or Araujo. It was a wise move in January to also bet on players in progression to carry out a generational change. There are the signings of Pedri and Trincão

From the economic point of view, the ideal thing for the club is not to make a large investment if there are no large sales first?

The priority is to maintain the competitiveness of the team but with a sustainable economy. What we have agreed in the club is that we must first ensure the exit transactions and based on this we can contemplate incorporations. To do it the other way around would add stress to the club’s balance sheet. It would not be common sense.

If there is a subject in which he is involved, it is that of Espai Barça. In this economic situation is it logical to pull it forward?

Espai Barça is more necessary than ever. We have to revitalize the stadium. All of our rivals in Europe have done it or are doing it. We have to do it because the income potential is much greater with a refurbished stadium, with more income from boxes or by the surname that will be given to the Camp Nou, known as ‘title rights’. It is an essential project. The sooner we have this income, the sooner we can compete. The project is finished, we can prepare the tender for the Camp Nou, we also have the financial structure ready. A part of the project has already been done, such as the Johan Cruyff stadium, we have already demolished the Miniestadi, which is where the new Palau will go, which we want in the end to be 15,000 spectators and not 10,000.

What are the keys to its financing?

We explain all this to financial institutions, led by Goldman Sachs. It is a unique financing company, in the sense that the guarantee of these 800 million in round numbers we have managed not to put at risk the viability of the day-to-day life of the club or the club’s assets. All the big games, such as ticketing, the contract with Nike or the television rights will continue to serve the day-to-day life of the club, they will not be linked to the Espai Barça agreement. It is financing that must be returned for 30 years. We will not be with a pandemic for 30 years. We do not receive all the money at once. As we certify the different works and projects, the financing will arrive. From September we can request the new building license.

What is the consideration that Goldman Sachs and the other financial entities obtain?

A market financial cost, which must be between 3 and 4%, which is what we have to finish reviewing. There are two tranches, one is the financing during the works, of about 5 years, with financial interests of between 3 and 4% plus opening costs. Then there is the second phase in which with the future income that you have, the first tranche of the same serves to pay the money that you have advanced plus an implicit interest of around 4%.

When can the referendum be held for the members to validate or not the new financing of Espai Barça?

This was paralyzed, like so many things, by the coronavirus and now we think that it can be done in the fall, after the assembly of delegates, as long as there are no new restrictions due to the COVID. It is the assembly that has to authorize the calling of the referendum.

In the midst of the first wave of the pandemic, Barça announced that it was looking for a company or companies that would put their surname at the Camp Nou to give up the income of the first year to fight the coronavirus. Is there any news about it?

It is a subject that is progressing. We are looking to make it a company or companies with a desire to continue. The answer is being positive. There are interesting negotiations going on and that is the only thing that can be said now.

When do you finally see the inauguration of the new Camp Nou?

If we approve the financing for this season that will begin in September and we start the works at full capacity next summer, we will be talking about four years of construction and we would be talking about opening the stadium in 2025. If everything is fulfilled, I will see it on that date. He’s long overdue. Clear. I wish we could have started two or three years ago. Here there were two elements that we did not control and that are logical. There was a change of mayor’s office and that took a process of repeating a part of the work that we had already done. The second factor is that we had to bring the majority of political forces to an agreement in exceptional political times. To all this was added the coronavirus, delaying almost everything.

Next summer there will be elections at the club. Do you intend to be part of any candidacy?

I am so focused on what we have to do in the economic and patrimonial area that I have this subject aside. I’ll think about it when I play. Now I don’t want to divert my attention. We will have time to think about the elections. I haven’t thought about it.