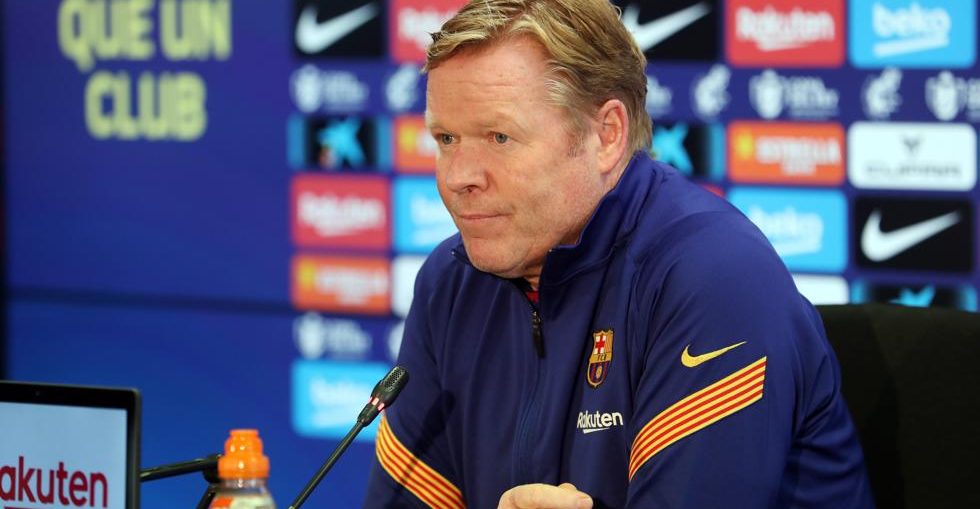 Ronald Koeman sat down with the press before tomorrow’s match against Villarreal. He spoke to the media about the significance of the remaining games, his continuity, the title contenders amid other things.

On beating Villarreal 4-0 earlier this season :

“It is true but it has been a long time since then. They play football very well with top-quality people and they are proving to be a strong team in Europe. Until Thursday, they have time to prepare for their game against Arsenal. It will be an interesting game tomorrow.”

On the character of the team :

“We know we have seven games to go and for us, as for the other three top teams, we must win. If you don’t win, you will have fewer options to win the league. This is very clear.”

On the problem of fatigue :

“I am not worried about the minutes of several players because they recover very well and we train little. We make the maximum recovery so that the games go well for us.”

On this match being the toughest of the remaining ones :

“I do not think so, each game has its difficulties. Most of the things depend on ourselves. We can win if we show energy. There are many difficulties for all teams. The rival plays football well.”

On whether Caferin’s threat could influence signings :

“It is not going to change much but we are not going to talk much. It is up to UEFA and I am aware of the calendar.”

On winning all the remaining 21 points :

“It is for all of the four teams. You can hardly fail. I don’t know how many points but you have to get a lot.”

“I know what happened to the team. We analyzed it and with more images, I saw that it is not an attitude problem but a tactical issue when we had the ball. I don’t know why we changed to four defenders playing from behind. With Umtiti, we played with three again. With images, we have observed where we did things wrong. “

On the return of Dembele, Coutinho and Ansu :

“Dembele has options to play. Coutinho and Ansu have been injured for longer than originally thought and I can’t say if they will ever be able to play this season.”

On his continuity with the squad :

“As I said before, the president has shown me his support and trust. In principle, I see myself as a coach next season. I have a contract and if not, we will have to talk.”

On getting less rest than the rivals :

“We have to accept it but I have not seen any change in the calendar despite my criticism.”

On the three rivals for the title :

“I don’t see a stronger team than the others. Atlético, Madrid, and Sevilla are winning many games. The advantage is that we have a game against Atlético and we can beat them and they can beat us. It will be a fight until the last day.”

On the figure of Alfred Schreuder :

“All of us on the staff are working very well. It is a new staff. I had never worked with Alfred, nor with Larsson, Albert Roca, and De la Fuente. And about Alfred, he is Dutch and the Dutch always like an offensive game. He was at Ajax with Ten Hag, who has a style similar to Barça and he has learned a lot from Nagelsmann and he puts the ideas here. Then we make the decisions.”

“He is a different player, one of the most balanced. He can dribble and take on with both legs. He is an important player. He has given us a lot this season and it is important for him to be there tomorrow.”

On playing before or after the rivals :

“I don’t know if it is better to play first or not than the rest, playing sooner or later does not matter so much to me. If the others win, you have to do it but this pressure already exists for this club in every way.”