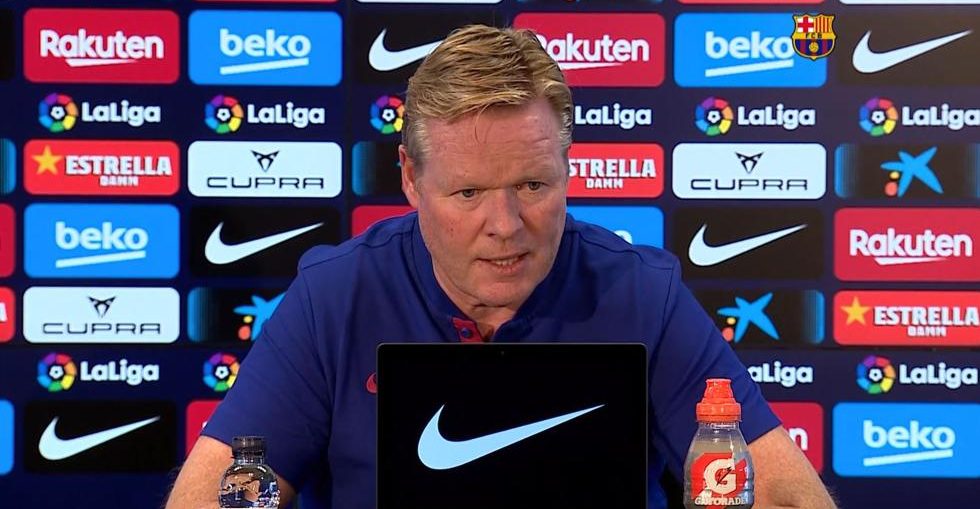 On Sunday afternoon, FC Barcelona will host Osasuna at the Camp Nou for a must-win game for Ronald Koeman’s men.

Here’s what Ronald Koeman said at the pre-match press conference;

“It’s a home game and because of our league form, we need the 3 points. We have analysed the opposition, and they played a great game (against us) last year. It will be a difficult game. We’ll have to create chances and score goals”

What’s the status on Dest’s injury?

“We will make the decision tomorrow morning. He had discomfort and today he has improved. We’ll wait until tomorrow to see if he is fit to play”

“You have to look at the financial situation of the club. Like everyone else here, those who love the club has to help it. I told Tusquets that if I could help, I was willing to do it. We have to think of the best for the club”

If Dest is injured, who plays right back?

Koeman wasn’t keen to talk about the candidates for the upcoming election and answered “We haven’t talked about that yet”.

How important is it to rotate the squad?

“The best thing for a coach is to know which team he has to play and see the performance that the team gave the other day against Dinamo, with a very good rhythm. The issue of Covid influences injuries. We need more players and luck also plays a part. We were not lucky with Ansu and Piqué. Hopefully we won’t get any more injures of this type”

How is Messi feeling?

“He had a good rest, like Frenkie, who were the ones who had played almost everything, including with their national team. In order not to get into physical problems we decided to leave them at home (against Dynamo Kyiv). Hopefully tomorrow they can play at their best, because we need them”

How would you rate your first 100 days as a coach of FC Barcelona?

“I don’t put a mark on myself, I leave that up to you. I have come to this club at a difficult time. I’ve had calmer first 100 days at other clubs, but I’m very happy to be here because I put my energy into the team, and in young people who focus ahead and on the tasks ahead”

Why is the team playing much better in the Champions League than in La Liga?

“It’s not easy to explain why. In the league, playing team’s which defend very deep has cost us points. In the Champions League the opposition defence give us more space. I don’t think we’ve deserved to lose this many points in the League. The win in Torino against Juventus game us confidence and made us relax more in other games”

“The system change (to a 4-2-3-1 formation) didn’t help him, but we can see that he can be a part of the double pivot. He is doing what he can to be a Barça midfielder. We have to give him time”

Would you try playing with four forwards?

“It doesn’t matter if we play with two, three or four forwards. Barça have always played with attacking full-backs and we must take into a count how we defend when we don’t have the ball. Yes, I agree that in every game, the mentality has always been very offensive”

“First I have to tell the players which 11 are going to start. There are many possibilities, and it also depends on whether Sergiño Dest can start or not”

“We always pay a lot of attention to set pieces, both in defense and in attack. We don’t have many tall players, so I think it’s difficult to score set pieces because normally the opponent is better than us. We try to take short corners in order to surprise the opponent”

What needs improving the most in the team?

“If we keep the rhythm of the ball, we are very good. The team needs a lot of intensity. Like the other day in Kiev, we defended well, but when we opened the scoring, with a high intensity, the opponent opened up.

What was Dest’s issue?

“It is not a serious issue because he trained well today. He was tired from the game against Dynamo. He had some discomfort in his leg, and we’re not going to risk anything. If he doesn’t feel good tomorrow, he won’t play”