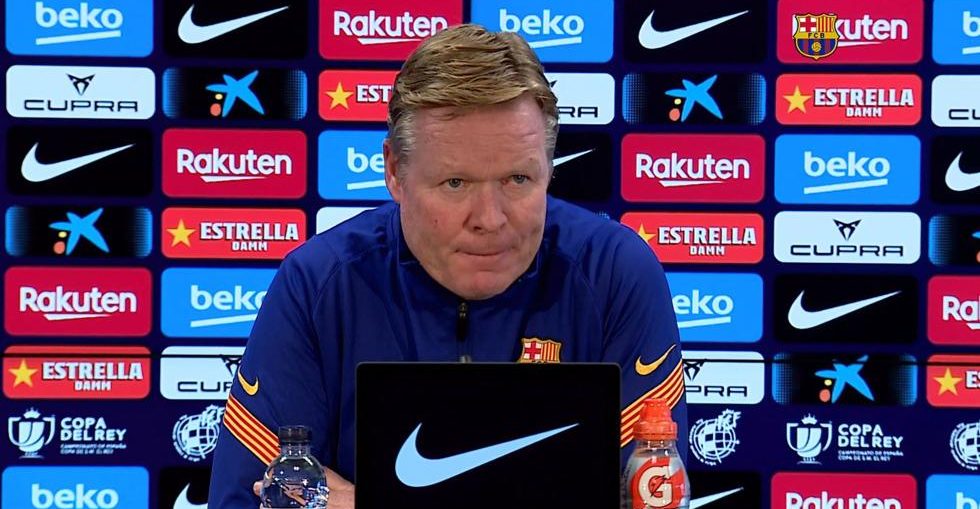 Ronald Koeman spoke to the press ahead of tomorrow’s Copa Del Rey game against Rayo Vallecano. He spoke about the upcoming game, Messi and much more.

“Rayo is a lower category team, but it is a first team. We play against a complicated team, at a complicated stadium and we have to be very focused.“

On his team combination for the game

“It is an important moment of the season, we are doing well away from home, we’ve decided a strong team for tomorrow. We know that the Cup is the shortest way to win something.”

On the opportunity to win a title

“I don’t think it’s easier with Atlético and Real Madrid absent, because there are other complicated teams. It’s an advantage for them because they don’t wear out, but I prefer to play every three days because it means that you are in all three competitions “.

On the Economic crisis at the club

“Barça is one of the greats that suffer more than the others due to the Covid issue because there is no public in the stadium, no tourists. I don’t know if that affects the players. If they charge too much? That depends on the club, which is the one that makes the contract. We have all helped the club in lowering salaries”

“Leo really wants to play. He is a winner and wants to be in all the games. Tomorrow we’ll have a talk and when we get to Madrid I will give the team. We have to wait until tomorrow to find out.”

“He had discomfort, but now he is eager, fresh, without discomfort. To win things, we need Messi at his level”

“You have to work like that, there is no other choice. You don’t have training sessions where you can work on many things tactically because you need to recover from one game and prepare the other. You’re late home from trips, but we’re lucky that this week the next game is on Sunday and we have one more day to recover.”

“Especially the players who may have a future here, the important thing for them is that they can train with the first team and see that they can have the level to compete. He has just turned 18 but the important thing is to give him the feeling that he can be counted on. There is still a long way to go, but he is a player who surely has a future here.”

“There is always a lack of players like him. When I was Van Gaal’s assistant, I knew Puyol for many years. He has always been a home player, with character, personality. Any team needs a player like him, with his qualities.”

“We want to have a favorable result during the game but for this we have to work hard, show intensity. But the most important thing is to go through. If it has to be with extra time, then be it, but hopefully sooner if we work well.”

“It is true that because of the injuries we have had with Piqué and Umtiti, we have been limited in the centrals. If there is a moment that we think they have to rest, they will rest, but tomorrow we will put a team to win. If the players are fine to play, we decide the team.”

Does the Cup have more significance seeing how Barca are doing in the league?

“We will try to fight for everything, but being realistic, seeing the distance that Atlético has and that now they will have more rest, it is complicated. But we are going to do everything possible. We play the cup to win it, I want to see this mentality tomorrow.”

Whether Koeman worries that the crisis will drag on

“I don’t know if it is true that they did not get paid this month. I have to ask before because not everything that appears in the press is true.”

“He still needs more training to return. He has only done two training sessions with the group that have been short. On Friday we have a stronger training and there we will decide if he can be available for Sunday.”

“I have not decided that there will be a goalkeeper for each competition. Tomorrow I will talk to them”

If Messi is stung after the suspension

“I don’t think that’s the case. Hopefully because of his quality, we will win the games”