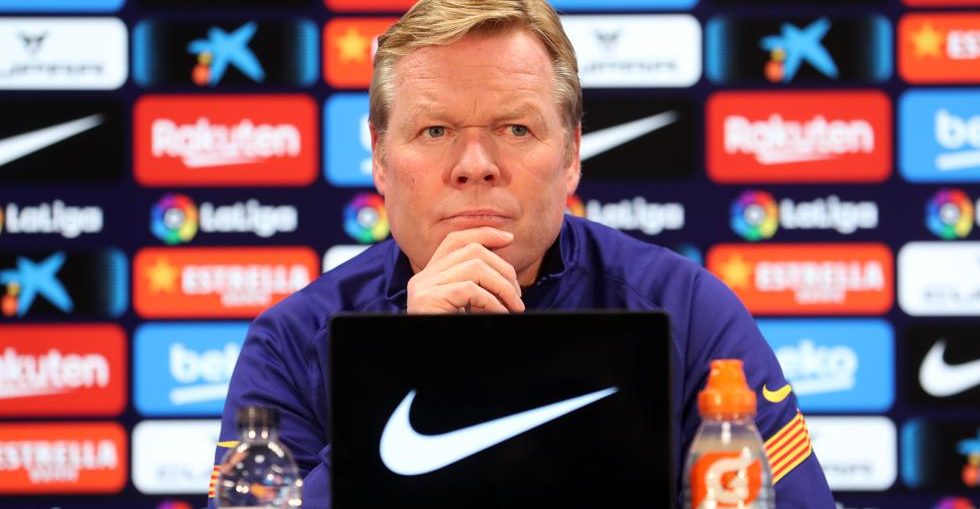 Ronald Koeman spoke to the press today ahead of the away game against Huesca. He talked about Messi’s return to the squad, Coutinho’s injury and much more.

Here is what he had to say:

“I want to say a few words about the new year. I wish everyone a happy year, where everyone succeeds and stays healthy.”

“We know that any game is complicated. There is a lot of competition. They have conceded few goals at home and we must be prepared to score. We have to improve as a team.”

“Messi is fine, and now has no ankle discomfort. He is prepared and his availability is important for us.”

“You have to see his situation. He did the interview and said that he has not made any decision. You have to respect him. Any player who ends his contract is free to decide. He is a player who will always demonstrate that he wants the best for the team. His decision must be respected.”

On the team’s mood –

“It is normal for the team to have doubts. Sometimes we lack effectiveness and make individual errors. In the end, what counts is the result and we definitely have to improve. If we go ahead confidently, we will trust ourselves more.”

“I look forward to many things, like football matches with an audience. We know that it is the month of the presidential elections and we will have to wait till for the results of the elections, to talk about the future of the club.”

“If someone isn’t signed, it’s because the club has no money. The only thing I’ve done with Ramon Planes is prepare for the future. We talk about young people and the positions in the team that needs improvement. We have a plan, but it will be discussed with the new president.”

“There are many games, which include a lot of away ones. I am realistic and I know that we are eleven points adrift from the first position in the league table. We cannot lose more points. We are not in the position to say that we have many chances to win the league. We cannot lose another game if we want to fight for the league.”

On whether he wants to release some players –

“Yes. I think that some players have to gain minutes and at this club it’s difficult for them right now. We also want to strengthen the squad.”

“It’s bad luck. We have several players sidelined with injuries for long time. For me Philippe has always been important, but now he has to recover. It is a significant loss. We have to see how we can solve the problem arised due to his loss.”

On the cold weather in Huesca –

“It doesn’t worry me, we have to accept it. We have to be confident from the beginning and play our game, whether it is hot or cold.”

On whether he regrets Suárez’s departure –

“No. I have always highlighted his qualities. It was a decision on his part and the club. A team like Atlético’s cannot be compared to ours. They score a few goals and sometimes one goal is enough for them.”

“We need all the forwards to be effective, not just Antoine. We have to improve. I think in the attacking part we must be more effective.”

On whether there is Messi dependence in the team –

“A little yes. His game and his importance has been of importance for this club. When the team did not play well, Leo was there to win the game for us. That is why he is the best player in the world.”

On whether the objective is to qualify for the Champions League –

“The situation in La Liga is that we are eleven points away from top and you cannot say that we will win the title. But that does not mean that we will not fight to win it.”