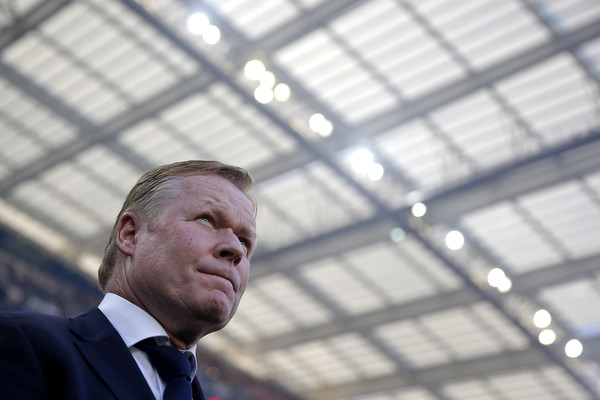 Newly appointed Ronald Koeman met the press ahead of his first official game in charge when Barcelona face Villarreal on Sunday night.

“Villarreal may be in better shape than us, but we are very well prepared. We have done a lot of work during these (last) weeks, and the team is ready to come out strong tomorrow.”

On the transfer market

On Messi being upset about Suarez leaving

“It is normal for a player to be sad when a good friend leaves the club. The important thing for me is Messi’s attitude in training. I have seen him train with intensity. I have no doubts about Messi in that regard.”

“We lack game rhythm because there are teams who have already played two (La Liga) games and that can make the difference, but we have to put energy into what we can control. We have to concentrate on the work we have to do and prepare the team for the start of the league.”

“Nothing is ruled out, but I’m only talking about the players who are here. I do not talk about signings. Barcelona are looking at players who can improve the squad, it’s the same as every other year.”

«I looked like the bad guy in the movie, but that is not the case. I called him and showed him respect as a player and as a person. He has given everything since day one. I told him that it would’ve been difficult for him to play if he stayed, but if he did, I would count on him.”

«It was a club decision. Before i signed my contract the club had decided to change things, and i backed that decision. It wasn’t just my decision, but they tried to change the team and now we’ve got a lot of young players here. Luis and I respect each other and spoke openly about the future. Now he’s got the change to go to a club like Atlético, and I wish him well.”

“There is a lot of competition in Riqui’s position. It is not true that I do not count on him, and tomorrow he is in the squad list, and available to play.”

“If you ask any Barcelona coach, they will tell you that they never had a quiet day. When you make changes in the team there are always people for and against. Being the coach of the best team in the world brings a lot of expectations. We will have a peace of mind and concentrate on our work.”

Riqui staying at Barca B

“I think young players have to play games. If Riqui or Aleña decide to stay, they will have opportunities and training sessions to show that I can count on them.”

On continuing as a coach next season

“I respect everyone’s opinion. It’s not good to answer everyone who has an opinion on me. What I have to do is lead the team and win games. This is what I can control.”

“We have to improve things defensively. It is a different system than we have played with in recent years. We want to push higher and not sit back as much as they’ve been doing lately. It is a radical change and it costs. We need time. In the last friendlies we have seen the team with more rhythm with the ball, and with great pressing. Villarreal are a good team with good front players. You have to have small distances between players when we don’t have the ball and win the ball as quickly as possible.”

“You have to play each player in their best position. He can play as a 10, as a left winger, but his quality is up front. It is important that you can show your quality in the oppositions box. I like him as a player and hopefully he will do well this season.”

If no signings are made

“We have to wait. There are two more weeks left (of the transfer market). On October 5th you can ask me again. We are always looking to improve the team but it may be complicated due to the financial difficulties.”

How football has changed since Koeman played

“The world of football has grown, with TV and marketing. We know that there are many opinions for and against the club, and president and players.”

“I don’t know how long he will be out. I’m happy with Neto, he’s working well and is a top class goalkeeper. I’m very happy with Neto and the 2 youth keepers (Iñaki Peña and Arnau Tenas), who can learn and one day be goalkeepers for Barcelona.”

“We have many players with quality in attack. Like Ansu, who is young but very talented. Dembele has been injured for a long time but is a very good player and is training well. We have many options and we can rotate in every game.”