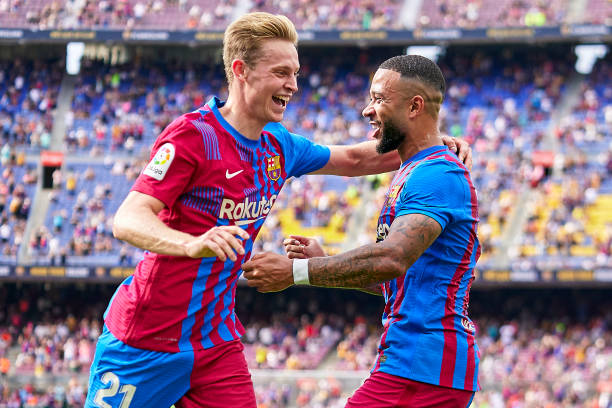 On Barça’s victory against Getafe

“It was very important to win at home. The first half was better than the second. In the second half our game with the ball was worse with a football. That is not what we expected, and we had losses [of possession]. We must highlight the attitude and the work to win the match. We knew how to suffer. It was different from last year, when we drew a match like today and we couldn’t hold on. I remember three or four matches with the same level in the second half, and we didn’t win them. People with the freshness to keep working. You can’t always play at the highest level. I’m very happy with the team. Psychologically it was very important to win this game. “

On the what Memphis brings to the team

“There are more players to lead this team. There are very young people too. With Memphis we have a player at the top who can make a difference, and we have to continue on this path. It is very important to have people like him.”

On the team’s defensive quality

“At the beginning of the second half we lost several balls, and we began to be worried. The rival pressed us more, but defensively we have been good. Offensively, sometimes you don’t play well, but you have to win at home. Last year we lost a lot of points at home, but now we have two victories.”

On what Nico González and Gavi brought to the team

“It is true that at the beginning of the second half, in a couple of minutes we lost four or five balls, and we did not feel comfortable. Players who cannot lose balls have done it, and with Nico and Gavi we were positionally better with the ball with more time with ball for us.”

“From the first day we are happy with how [Gavi] and Nico train. They are showing their quality. They have entered a difficult game, and it is important for them to have confidence at 17-18 years old. I have no doubts about them. They will be two great players.”

On Sergiño Dest playing on the wing

On the crowd whistling at Antoine Griezmann

“I don’t like it when a Barça player is whistled [at]. Someone who works like Antoine can never be criticized. You can never whistle a player without having attitude and work. I know he has not been lucky, but it is a single match. All the attackers can have their day, but there are games where you can’t find the space. We haven’t created opportunities for him either, and it all depends on the game we play for our attackers as well.”

“As I said yesterday, the club knows what we want, but I don’t know if we can. To want and to do is totally different. I don’t ask the club for anything. We have been working together for a while, and I try to understand the financial situation of the club, but looking at the squad and the injured players, winning today was important. Hopefully we can reinforce the squad because we need it, but if it is not possible, we will continue working as before.”

“Surely we will talk tomorrow. For the club, the coach, and the players, you have to have a future in a place where you are, and there are players who will have few opportunities to play. And we will recover injured, five or six that can start. I like to say it before because in four or five days it will be too late.”

Here is what Gavi had to say:

On making his first-team debut today

“Right now I am the happiest kid in the world. Since I was little, I had that dream of making my debut in the first division at the Camp Nou, and today I have been able to achieve it. A thousand things are going through my head. I was a little nervous, I went to do it the best I could. At times like this I remember my family, my friends, all the coaches, La Masía, especially Sergi Milá, who helped me a lot throughout my career.”

Here is what Roberto had to say:

“Madrid had won the day before and it was very important to score the three points, more than my goal.”

On Barça finding the right path for the season

On González and Gavi breaking into the first team

“I am very happy with Gavi and Nico. They are players with a great future, and it is important that footballers of the youth team come up and they feel the colors.”

On the reception the fans gave him at Camp Nou

“Not in my best dreams could I imagine the Camp Nou chanting my name.”

On the team’s performance

“I am left with a bittersweet feeling again. Not as much as in Bilbao, where we left two points, but I think Barça can play better.”

On the importance of the win

“These three points could not be escaped. It was very important to add a victory before the break for the team’s morale and to keep growing.”

Here is what ter Stegen had to say:

On how Barça managed to secure the three points against Getafe

“It was a very difficult game and we won because of the good decisions we made during the game. The image we have given is superb. Always there are things to improve, but we are more compact and we defend better. Other times we lowered the intensity.”

“It was a difficult journey because the knee is very delicate. I am happy, and I want to thank those who have made this return possible.”

On the impact the fans make in the stadium

“Everyone who has been on the field can see the difference between playing with the public or without It has given us a lot of energy in difficult times.”