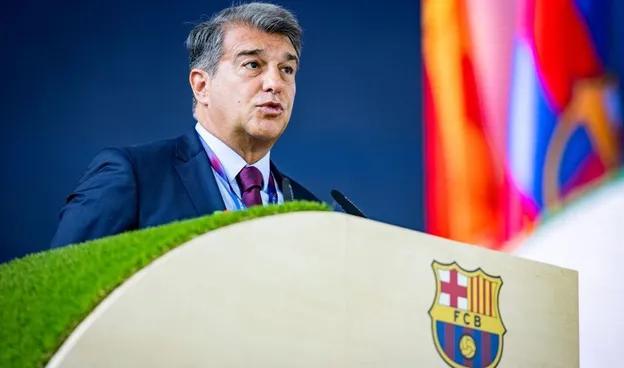 FC Barcelona president Joan Laporta spoke at the club’s general assembly, where he defended the club’s position on the European Super League project, in which they remain on the same page as Real Madrid and Juventus.

The Barcelona president made a chronology of the events and argued the reasons that have led Barça to remain firm in the face of UEFA’s threats. In addition, he attacked state clubs such as Manchester City and PSG without citing them, “for altering the rules”. Laporta has asked that the members to allow them to continue defending the interests of the club.

Here’s everything that the Barça president had to say:

On the origins of the project

“During the campaign, clubs addressed us to explain the Super League project. In 2003 I had the experience of the G-14. Later, with me as the president of Barça, we founded the ECA. When I became president, it was an urgent matter and there were 11 clubs working. We submitted it to our lawyers, we studied it and for the first time I saw that it was feasible. Before, it had always generated controversy and the clubs did not agree but now the clubs were the big ones in Europe: Real Madrid, Atlético, Liverpool, Manchester United, Chelsea, Arsenal, Manchester City, Juventus, Inter and Milan.”

On the financing and the precedent of the Super League

“Organizing a competition from the base was something for all the clubs to think about. Was there funding? Yes, a financial institution had 3.5 billion deposited for an attractive and feasible project. And it came at a time when it guaranteed 700 million per season plus the variables. We would not want to make the historical mistake of not competing in such a European competition and then see our direct rivals there.”

On if it is a “living” project

“It involved the sustainability of the clubs, but we spoke with the rest of the clubs and asked that they accept that we would submit the competition format to the will of our members at the next Assembly of delegates. Today I cannot vote on the competition format because it does not exist but the project is alive. This condition exempted us from the compensation that the clubs that left the Super League project had to pay.”

On how to situation panned out

“UEFA reacted badly, they did not want to meet or discuss the matter and we had no choice but to speak to the courts and there is one that points out that if UEFA takes action against this Super League, a de facto monopoly is consolidated. A Swiss court told UEFA that it could not sanction the clubs. UEFA threatened but there are clubs that did not feel comfortable and there is a state club (he did not mention Manchester City) that left as a result. State clubs play to an advantage to make up for losses. UEFA continued to press and the rest of the English clubs left as well. Liverpool and Manchester United, who were among those who pulled out of the competition, with Arsenal , Chelsea and Tottenham. After this, Milan, Inter and Atlético, in a delicate situation, also withdrew.”

On the competition and paying penalties

“To us, who defend the interests of Barça, some officials shattered our illusions. UEFA did not want to accept the dialogue and we do not understand it but we have kept trying. We have more than 122 years of history and our sentiment must be respected. By simply thinking or organizing a competition, we do not have to apologize for wanting to be masters of our destiny in the world of football. And we will not pay penalties if we are right according to justice.”

“What will happen here? UEFA opened a disciplinary file and that they would not let us play the Champions League if we did not apologize and pay a fine, but time has proved us right. UEFA has withdrawn the disciplinary file and has allowed us to play the Champions League. We love football and we believe that the most popular sport in the world is in a delicate situation. TV audiences have dropped and in France they have dropped by half.”

On his message to the state clubs

“What a coincidence that a state club, which you already know (PSG), is investing more than ever and offers double to a player we love. What these state clubs do does adulterate the competition. Your children must regain interest in football. They must be interested in attractive matches. They watch it from tablets and phones but with fewer audiences, there is less money for TV. We do it so that the entire football pyramid benefits. Smaller clubs are more dependent on TV rights; the big ones have a more diversified line of business. We want the financial sustainability of the clubs and we want the most attractive competition in the world and for it to be held in Europe.”

“This does not end our association with the Leagues and the Copa del Rey. We are willing to find solutions by putting it on the table and debating it, but let the clubs be the boss. We want to talk with the organizations so that they can guide us and maintain meritocracy and solidarity. The speech has been very demagogue.”

On the Super League bringing more money to the clubs

On his message of optimism

“I am convinced that if we continue to defend Barça’s interests, it will be very good and if it goes off the rails, I will bring this format here for you to validate. The virulent reaction of UEFA has not allowed us to bring the project to the Assembly. You are the owners of the club. Hopefully we can push forward to help the club’s economic situation and achieve a historic desire to achieve a Super League. We remain in contact with the clubs that have left and we know that if an action that we are taking based on the court ruling is successful, the contract they have with UEFA would not continue in force. And I insist, it would be a Super League with meritocracy, solidarity and rules that would prevent the State clubs from altering it.”

On UEFA and the money involved

“We are creating something new. It cannot be that the clubs lose money and UEFA make money. This is not solved by UEFA, which also incorporates another competition with the money of the clubs. UEFA is interested in having more clubs participate because they are votes.”

On taking examples from basketball and handball

“The example is in the Euroleague basketball and the handball Champions League, which are fantastic competitions. We have seen it in Cologne. The handball Champions League was still better organized and represents a significant income for the club. At the moment UEFA is not supporting the Super League, but the same thing happened with the Euroleague basketball. We have to move forward and make decisions. The president of LaLiga also intervened, but LaLiga will continue. We are working to make all competitions compatible.”

On being open to vote later online

“Telematics will allow us to decide many things at the club and we must make it reliable and safe. I hope that soon we will be able to do a telematic vote, the first of the club. With the Super League, we must continue working to be able to have a dialogue with UEFA. We have always had the attitude of dialogue with UEFA. It will not be easy because it is dismantling a monopoly they have set up.”