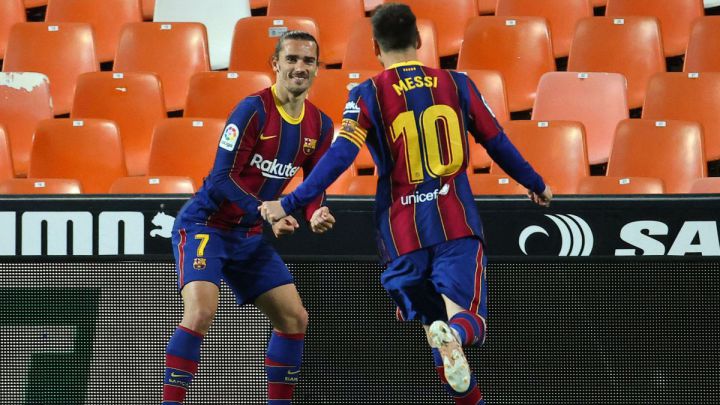 Barça laboured their way to a 3-2 win away at the Mestalla in Matchday 34 of LaLiga, with a Messi brace and a Griezmann goal securing the 3 points for the Catalan outfit. Alfred Schreuder, Gerard Piqué and Clément Lenglet all spoke after the game.

Here is what Alfred Schreuder had to say:

On how the team’s reaction today compares to the reaction against Granada
“The Granada game had nothing to do with it. We played well the first half and reacted well afterwards. I think we deserved the win. The boys have worked well and have shown that they have character after 1-0. That is so important.”

On who is favorite to win LaLiga
“We are all close. We don’t look at other teams, but at ourselves. Next week is not a final, we have four matches in which we have to try to win. There are games in which we dropped points but so have Atlético Madrid, Sevilla or Real Madrid. Atlético’s game is important, but not a final.”

On how confident he is of the team’s chances to win LaLiga
“Everyone at Barça trusts the players and we trust the players. Today we showed it again. In January, the distance with Atlético was a lot, we were very far. And now we are close. If we win next week, we go ahead of them.”

On the high number of goals Barça is conceding
“The second goal is difficult to defend today; and in the first there is a block on ter Stegen. But it is true that against Granada we did not defend well in two or three moments of the game. It is important to have the ball and control the game, but also to defend.”

Here is what Gerard Piqué had to say:

On how his knee feels
“Good. There are small discomforts but in general I was able to compete and I will continue fighting until the end.”

On the fact that all remaining games are decisive
“That means that we must continue in the fight. Being there until the end is worthwhile, that’s what we wanted at the beginning of the season, especially after the first half. It was a match similar to Villarreal. We turned it around after the first goal. Their second goal made us have to suffer until the end.”

On Barça’s inability to close out games
“We would like to. Sometimes they are dynamic. We have to analyze goal by goal. They (opponents) shoot very few times but almost all the shots we concede go in. We have to analyze that. Thursday was an unexpected game and the defeat hurt us, but winning at Villarreal and Valencia was difficult. If you look to how it was six months ago, it has a lot of merit.”

On the possible foul in Valencia’s first goal
“I guess they didn’t see anything in the VAR. He caught me on my back.”

On how Barça will approach the game vs Atlético
“With the idea of ​​winning. It is in our hands. We have to win on Saturday and then wait for Madrid-Sevilla.”

On whether the next matchday will decide the league winner
“I can not be sure. In other conditions I would say yes. Other times the teams were more reliable. We hope to be leaders, but even if another team does, I would not put my hand in the fire.”

Here is what Clément Lenglet had to say:

On today’s win
“We have done what we had to do, which was to win, although it was a strange game.”

On the team’s bad defensive streak
“In the last games, every time we have a chance against it is a goal, so we have to be cateful because all the chances we have are goals, although the second goal today was a bit of bad luck because it was unstoppable.”

On the team’s reaction after the loss against Granada
“Thursday was a failure for the team and it hurt us a lot, but we have shown that we can and want to fight for this League. We have shown that we have patience, we lacked a little more speed in the game, then it helps that they were worn out and Leo and Antoine were able to take advantage of those spaces. We have 12 points left and we are going to fight for all the games as if it were the last.”