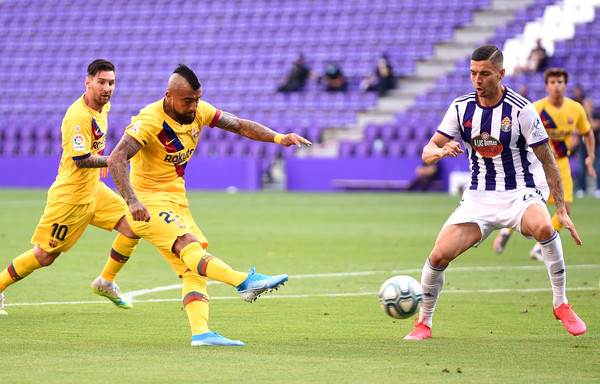 Barcelona’s players were happy post-match, with the Catalans’ hard-fought win against a tough opponent in Real Valladolid.

Barcelona faced Real Valladolid on Saturday evening, in the 36th round of LaLiga Santander football, where the Catalans had their shot at edging closer to league leaders, Real Madrid.

The game was a hard-fought win for the away side at the Estadio José Zorila, and Arturo Vidal scored the go-ahead goal for Barcelona in the 15th minute of play with a strong strike to give his team the lead.

The goal ultimately ended up being the decider, as Barcelona now are just a point behind Real Madrid, who lead the league with 80 points on their account, but have a game in hand against Granada this coming Monday, before facing Villarreal at home on Thursday and Leganés at the Butarque on Sunday.

Barcelona’s coming opponents for the final two rounds of league football this campaign are Osasuna who will guest the Camp Nou, before the league being rounded off by the Catalans through a trip to the Mendizorrotza Stadium.

Arturo Vidal asks for more if Barça are to win LaLiga

The Chilean game-winner voiced his opinion after the game, in a post-match interview with the club’s official media channels. He was happy with the performance, but asked for more if the club want to win the league ahead of their archrivals. He also had praise for Valladolid’s players, who, unsurprisingly, proved to be worthy opponents.

“Honestly, they made things tough [for us] in the second half, but the important thing is that we won the match. We know that in the second half, we had trouble finding our rhythm, we know we have to improve if we want to fight for the championship,” Vidal explained, but remained optimistic.

“The important thing is that the goal helped us in getting the three points, what I want is to continue helping the team,” he said, despite recent reports linking him to a move away from Barcelona.

With Barcelona knowing that their mission for the upcoming two league fixtures is to win both, they also know that they depend on Real Madrid slipping up, thus giving Barcelona breathing room and a lead in points.

“It [winning the league] does not [solely] depend on us. We have to keep going and giving it all we got, and we have to wait. If we do not win [the league], we will get [back] to the Champions League in the best shape possible,” an optimistic Vidal added.

The La Masía product has had a recent rejuvenation after his return from injury, being a key part of Quique Setién’s setup and has put in an impressive shift in midfield. He featured once again, this time against Valladolid, and reflected on the match where ter Stegen once again was key in Barcelona’s win.

“The game could have been different if we had scored more goals in the first half,” Roberto explained.

“In the second half, the match was even, with a good Valladolid team, but the important thing is that we left with three points in the end,” he continued.

The 28 year old midfielder only had praise left for Marc-André ter Stegen, who had his clean sheet number 100 in a Barcelona shirt Saturday evening.

“It goes without saying: he is there to save us, game after game, and it is a pleasure to have him in our goal,” the midfielder said.

During his time with Barcelona, Sergi Roberto’s key value has been his versatility, having played as a right-back and as a midfielder for lengthy periods of time. The player stated that he is happy to help the team in whatever way he can.

“I always see it as an opportunity to improve. In the second half, I played further up the pitch,” Roberto said.