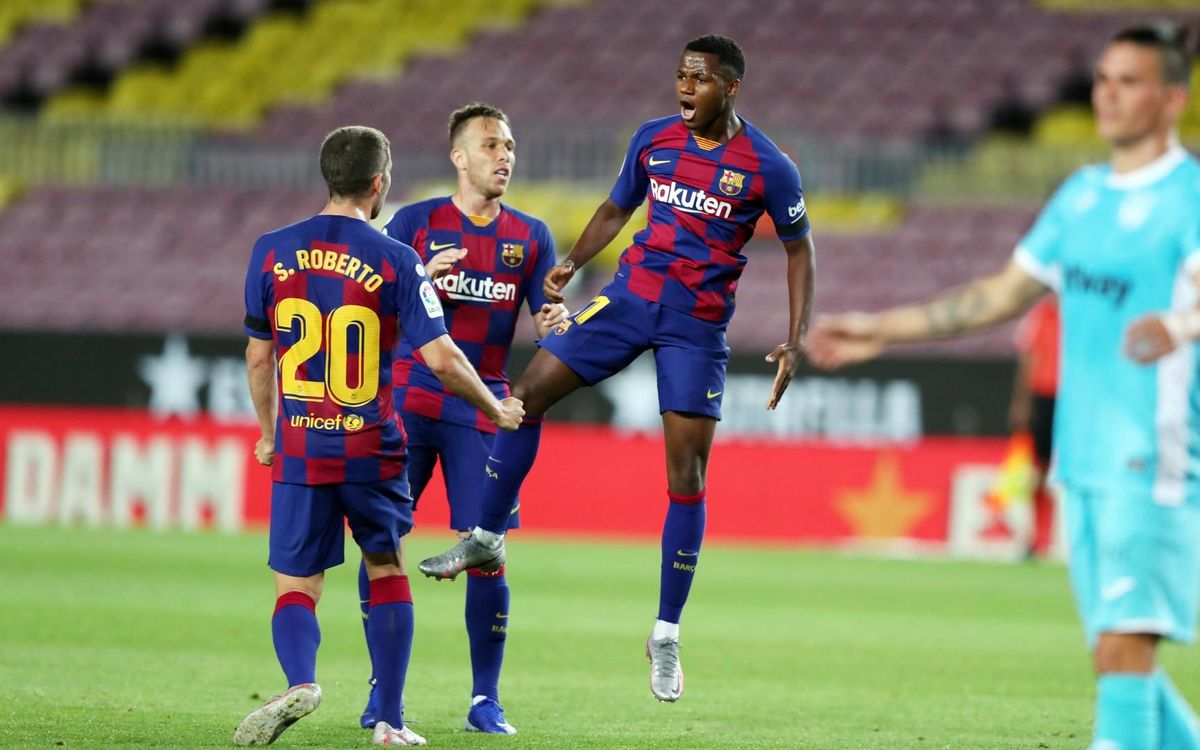 The coach, Quique Setién, and the players, Junior Firpo and Ivan Rakitic spoke to different news outlets about the first home game after the break, Barça’s victory against Leganés.

More than 100 days later, Barça returned to their home, and football to Camp Nou on matchday 29 of LaLiga. Barça received Leganés in hunt of three more points that keep them at the top of the race, and despite being a closed game due to the plan of the visiting team, Barcelona kept the triumph.

With goals from Ansu Fati and Lionel Messi, the Blaugrana team remain in first place fighting to be league champions for the 27th time in their history.

At the end of the night, Quique Setién reviewed the game and gave his statements about it. From playing without an audience, and Fati’s goal, to managing the playing time in the squad.

“The empty Camp Nou? It’s different. It is like losing an important part of the essence of football. ”

“You have to get used to this, it is how you play and playing in these conditions is different, there are players who can be affected, others less, it is different from everything we have experienced. We have to adapt and play like this, also away from home we will have that small advantage. Next Friday for example in Seville can give us a certain advantage,” he added.

The young La Masía talent opened the score for Barça and added his fifth goal in his first season as a professional footballer. In addition to performing very good minutes in his first appearance in the starting XI after the forced break.

“Of course it is a relief that all the forwards see the goal, that there are different possibilities and that we do not depend only on a couple of players. Today Ansu has done things very well, he has scored, he has worked, he has been successful in easy time and he has put the game on our favour. ”

“We chose Ansu because we saw him very well in training and the truth is that he was very good [during the game too]. He lacks things, and above all, he has to be regular in terms of consistency. We have to take care of him.”

Fati was replaced by Luis Suárez at the beginning of the second half and the Cantabrian coach explains why.

“Ansu Fati’s change? He has had some discomfort for a long time and has not been able to train at the same pace as his teammates. He has done a very good first 45 minutes. ”

“Ansu has been training some sessions very well. He has to improve some things but the time he has played has been very good. He had discomfort during the half part and we didn’t want to take any risk.”

The match from Setién’s view

“I already knew that the game was going to be difficult. We started well but then we lost some balls, we wanted to rush and they were able to score. Then we controlled more or less, but they lock up well and it is not easy to find the spaces because we are not yet definite with the ball.”

“We have lacked to overcome a team that locks up well and when you are not precise, it requires more. Leganés has done well and this could hurt us.”

“In the Cup match we scored a goal in the first act, but, indeed, not even 1-0 went well for us. They put the lines together. It is not easy to make those passes. It is not easy for people who play inside to manoeuvre. You have to be precise and agile.”

It is true that the French forward, Antoine Griezmann, has not had his best season regarding feelings and performances, despite what the numbers show.

“Griezmann is a boy who does a praiseworthy job. He is a very important player, I am happy with him.”

The next game, or rather, the next final that Barça faces is against Sevilla at the Ramón Sanchez Pizjuán Stadium – an always complicated rival that makes it even more difficult at home, although on Friday it will be without their fans.

“It was what we considered, to overcome these first two games as we have done to go to Seville with six points in the classification. Pizjuán will be a difficult game, but we are on the right track. We do have to find more lucidity to handle the ball against rivals who leave you with so few spaces.”

“I hope we can continue this streak and little by little we will find some aspects that we lack in terms of that lucidity with the ball in games with few spaces. This strengthens our confidence.”

Riqui Puig and the game-time management for the players

The young Catalan had 20 minutes of game-time at the Camp Nou and transmitted good feelings. From this, is expected that Setién continues to count on the youngster for the remainder of the season.

“Riqui Puig has entered the field with a lot of energy, trying to demonstrate his desire. I highly value the work he has done and the role he has had during the match.”

“At the moment we are happy with the minute management we have done for the team. The goal is to reach the end of the season with all the players in their best conditions. ”

Junior Firpo, who also spoke to the media at the end of the game, played as a starter and gave an assist that ended in a goal from Ansu Fati.

“Ansu’s goal has been key because they had had two clear occasions with 0-0. It has been what it is commonly known as a psychological goal.”

In addition to talking about the factors surrounding the team and the situation in which today’s game was presented.

“In Mallorca, everything was easier, because we scored as soon as we started, but tonight we had to wait for the goal to come.”

“It is about is winning, because there are many games in a few days. Adding points allows us to be closer to the objective, which is to conquer the title.”

Play behind closed doors and see the empty stands.

“It becomes strange because Camp Nou is always full. The fans help you with their applause, but it is what we have to live right now.”

“The five changes are positive. This is better for those of us who have fewer minutes.”

Finally, Ivan Rakitic also spoke about the breakthrough player of this season at Barça and the team’s state of form.

“Ansu Fati is doing a spectacular job. He must continue to have patience and he will have opportunities.”

“We need more time to pick up the pace, each game will be better. It is important to keep winning.”