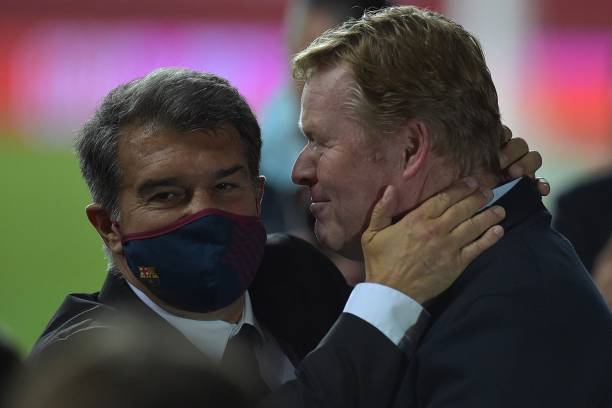 Amid a lot of confusion associated with the Dutchman’s future at Barça and the president yet to announce his decision about the coach’s continuity, the latest reports suggest that Ronald Koeman will be continuing on the Barça bench next season.

According to Catalunya Radio, Ronald Koeman is currently in the best position to coach Barça next season. The environments of the coach and the president have been in contact for the last few days. It is a major concern for the Barça president, who has had a very busy schedule lately. Yesterday he presented Agüero, this morning Eric Garcia and, this afternoon, he inaugurated the Cruyff Court in Vilanova del Camí accompanied by the president of the Foundation, Susila Cruyff. After the first meeting, there was no conclusion reached with regard to the continuity of Ronald Koeman. The second meeting took place in the club’s offices and the feelings appeared to be even worse. Joan Laporta asked Koeman to take a few days off to make the final decision and acknowledged that he was studying other options for the Camp Nou bench. Over the past few days, the relationship has been strained, but the gesture of the president has relaxed when asked about the continuity of the Dutch coach.

According to Mundo Deportivo, Ronald Koeman was summoned yesterday to a meeting with Rafa Yuste, sports vice president, and Mateu Alemany, football director, to work on the future and continue to ‘unify criteria’, to maintain the slang used in recent days with Joan Laporta. The future of the coach seems to be safe, according to the feelings that emerge from the words of Laporta during the presentation of Eric Garcia.

The Koeman-Yuste-Alemany meeting served to review lines of work and the complicity between all the parties advances in the direction of ending up guaranteeing Ronald’s continuity, every time with the passing of the days his work is contemplated with perspective and is valued more all year long and not just the disappointing end of the season.

Laporta, in recent days , has been in favor of ‘unifying criteria’ with the coach and this was manifested both in the presentation of Kun Agüero and in that of Eric Garcia. In the previous meetings with Koeman, however, the sensations that transcended were different. Now, the feeling is that the future job fits Koeman’s profile as long as a number of concepts are adjusted. Alemany and Ramon Planes, who highly value ​​their collaboration with Koeman, support the continuity of the Dutchman.