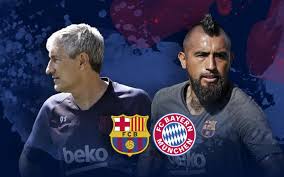 Coach Setién and player Arturo Vidal talk to the press ahead of FC Barcelona’s Champions League clash against Bayern Munich.

On tomorrow’s match: “It is the most important match of the season, we have high hopes that we can win the Champions League. Bayern is a difficult side to face, but we are Barça. If we do what we must do, we have high chances of winning.”

“I like this one-legged set-up, it will be a beautiful match.”

“I have heard what people at the Bayern Munich are saying and I know for the fact that whatever is said publicly is not what they really think. They are going to play against Barça, not against a Bundesliga team. They will be playing against the best team in the world.”

If he is going to start tomorrow: “I don’t know if I deserve to start or not, everyone here wants to play and it’s up to the coach to make the decision.”

On Bayern’s coach: “Flick has done very well since his arrival. He won two titles and I think he deserves to continue. Bayern is one of the favorites to win in all competitions. I was there and I know the feeling. But Barcelona is the best team in the world. We’ll see who deserves it.”

About pessimism from the fans: “We know that there are doubts among our fans. We did not play on our level in La Liga and ended up losing it. But we have Leo and other world class players on our side, that’s why I am saying that we are the best team in the world and tomorrow, we want to show it.”

Neymar’s transfer: “It is understood that they want to sign Neymar and it is not only because of yesterday’s game but because he has a lot of talent and would help the team a lot. Beyond that, I don’t know. I only think about the upcoming game against Bayern and qualifying for the next round.”

Match against Bayern: “We have arrived well. We all were waiting for this game. We have prepared the game well. We are delighted to have Dembélé with us again and I believe that he will be in a condition to participate for a few minutes. We are excited about his return.”

“We know the potential of that team and how much damage they can cause but we also have enough talent and potential on our side, I think it will be an equal game. We have a lot to show in this game.”

“Having the ball at our feet will be an important aspect for tomorrow’s game, like this there will be less defensive play for us. Bayern’s offensive potential is very high and if we have the ball, they won’t be able to do much damage. Everything will depend on it. The example is that Atalanta was ahead against PSG for a long time without having much of the ball. You have to keep playing.”

“The motivation is very high in this team. It is an important game against a great rival. Stating these things is different than actually executing them. These are two great teams that will want to play according to their style. I can see a great match with equal opportunities for both.”

“Football has many paradoxes. PSG had played only two games and had a long break, while Atalanta did not have much time to recover and they seemed tired. Another thing that made the difference was Atalanta’s lack of talent as compared to PSG.”

“We have considered many things. We are clear about the talent and potential of the rival. It is better to have the ball and try to harm them.”

“Bayern worries us about everything. It is a very complete team, they press well, attack with many players, defend well. But they know that if we are able to deal with their pressure, we can hurt them. The one who gets the tactics right will win the tie. But I see it as a very even match.”

“Lewandowski is a great footballer but I don’t think he’s on par with Leo. It’s clear, he’s in a great form and he’s very well assisted by his teammates. We also saw Leo against Napoli. It’s good that we can enjoy two brilliant footballers at once.”

“Leo can help us win the game, obviously, but I have always believed in teamwork. We will have to help Leo, because he or any other outstanding player needs the strength of the team.”