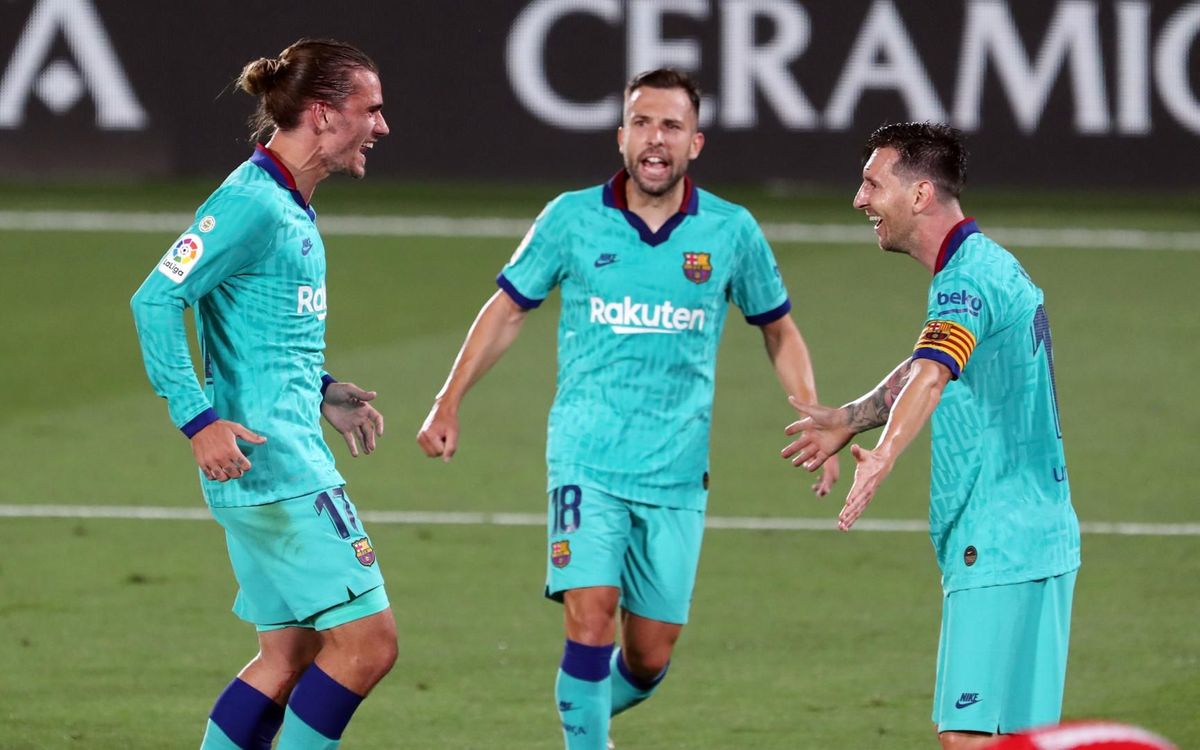 After the victory against Villarreal and one of the team’s best games, Quique Setién spoke to the media along with Gerard Piqué and Sergi Roberto.

At the Estadio de la Cerámica, Barcelona confirmed their best game of the season, with four goals and a full show they beat Villarreal and made culés enjoy a lot. With goals from Antoine Griezmann, Luis Suárez, Ansu Fati and one own goal, Barça highlighted the new tactical system of the Cantabrian coach.

Quique Setién analysed the game and the performance of his players.

“Perhaps we have surprised Villarreal. We have charged them a lot inside, with the coordination between Luis Suárez, Leo Messi and Antoine Griezmann. One fixing the centrals, another leaving … they have coordinated extraordinarily well. They are high-quality players and we wanted them to get more inside. It worked out well for us. We have made good progress on the outside.”

“We have made a few good matches, but the goals are what determine everything and today we have been able to score four.”

“We started scoring early, we had very good moments in which we were able to overcome the rival and score. I am happy because we needed to do this match. We needed it long before because it would have given us the peace of mind we needed.”

“I am very satisfied, I think the score could have been more extensive and I am happy to have tied up a great rival who has barely been able to make us three counters. In Vigo and Seville, we also did good first parts, but with less success, the key is to play like today, doing the pressure very well, but scoring, being effective.”

“The Griezmann piece was a great goal only within the reach of the great footballers, that goal is one of those who greatly strengthen a player. He was also there to score 0-1. We have changed some things a little, he has found himself well, he has been participatory, he has understood very well with Messi. He played a spectacular match.”

“We needed this match long before. Now we hope to maintain this level, keep adding points and see what happens. If I think Madrid can fail? There are things that we cannot control. We will try to win, maintain this level, give a good image and improve feelings. It is about reinforcing ourselves, not only for these four games but also thinking about the Champions League.”

“Sergi Roberto is a versatile footballer who does it well no matter where he plays. Today he gave us a lot of energy and you could see that he was enjoying a position that he likes, but we have already told him that we were going to give Semedo a little rest and that he would have to play on the side.”

“I’m not going to say anything, the president already said it … every day I trust VAR less.”

Gerard Piqué, one of the most important players for the team and captain, also shared his feelings after the match ended.

“The three points were important to continue in the fight and the game is our trademark. We had a great game. We must continue in this path until the end of the season.”

“Playing in this way makes the three [Messi, Suárez and Griezmann] more inside and they are close to the area and the goal, and we are also more protected. That Antoine goal is very important for his confidence. We have to prepare for the next game, which I think is Wednesday against Espanyol.”

“We don’t like being behind, but we are going to give it our all to turn it around, even if it is very difficult.”

After being asked about the gesture he made when Lionel Messi’s goal was annulled for offside.

“I don’t remember, I don’t know … When you’re in the field, with your adrenaline rushing … I don’t know what you’re talking about.”

“For the history of this club. To represent this crest and these colours, we have to fight to the end. ”

Finally, Sergi Roberto spoke about his return to midfield and the victory at Villarreal.

“It had been a while since I played in the middle and I felt comfortable, controlling the ball. I had a great time in the middle. Too bad later I had to go back to the side, but I always want to be on the field. ”

“We started very well, scoring fast, but then they draw and we knew how to react. Villarreal was one of the teams that returned the best after confinement.”

Griezmann’s goal: “It just reminded me of that goal, that of Messi in Seville [against Real Betis]. Griezmann’s is a little more centred, but it is a goal that is at the level of a few players like Leo or Antoine.”

“Tactically, it had been a long time since I played there. Sometimes I do it in the centre of the field on the right and today I did it on the left, where I am more comfortable. It is where I played at Barça B. I had fun, with spaces and fixing the rival defence.”