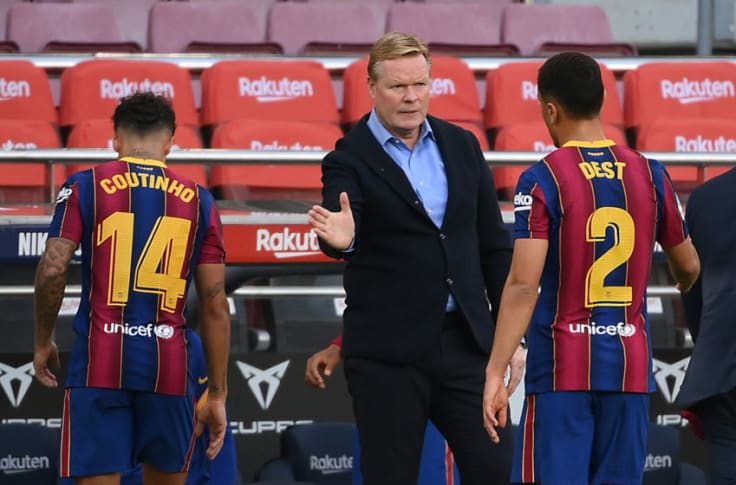 Barça welcomed Osasuna on Sunday afternoon in the La Liga’s first game of the day. Ronald Koeman lined Barca up in a formation that looked like a 4-1-4-1 at first, but it soon became obvious that Pedri was playing in a pivot role, next to Frenkie De Jong. Seeing Martin Braithwaithe, Antoine Griezmann, Lionel Messi and Phil Coutinho all start was a fascinating and unpredictable turn of the hand by Señor Koeman. Well played. So, what else did we see?

Antoine Griezmann had a really good outing today; he was zipping in and out of the pockets of space between the Osasuna midfield line and defense line. It was a really good performance from the Frenchman, a truly reassuring display from a man who looks like he’s finding his confidence, and this was made even more beautiful because Messi was on the pitch for the entirety of the game. There has always been this conjecture that he and Messi can’t play together effectively, more performances like this will surely put those theories to bed finally.

Oscar Mingueza has been an addition to relish, his performances have been really great. Clean sheets in both his matches thus far. And he has been impressive going forward, his home debut couldn’t have gone any better. Hardly putting a foot wrong all game long. The injury to Clement Lenglet was a blight on today’s performance but on the flip side, it only means Oscar will get more time on the pitch, which is always a good thing, for a player so young who has shown he can be relied upon, it is really refreshing to see. There now exists the possibility of him and Araujo starting first team matches together in a few weeks. Hopefully Señor Ronald can trust the both of them as time passes. The Masia boys are looking good once again, long may it continue.

During the week, the world at large lost an icon, Diego Armando Maradona died on the 25th of November. All of football poured out their tribute to one of most magnificent players ever to grace the field, the splendour with which he took to the grass was an inspiration to many who love football. Today, Leo Messi almost recreated the “Hand of God” but didn’t. Considering that he hadn’t scored much from open play this season, it looked like he wouldn’t get a goal and the ensuing tribute everyone was expecting to get. But he eventually did, an absolute rocket from outside the box. And then came the tribute, a recreation of Maradona’s jubilations, whilst wearing the Newell’s jersey. Touching tribute.

Now we can look forward to our next game in the Champions League against Ferencvarosi on Wednesday, let’s hope the boys can recreate a performance similar to this one.