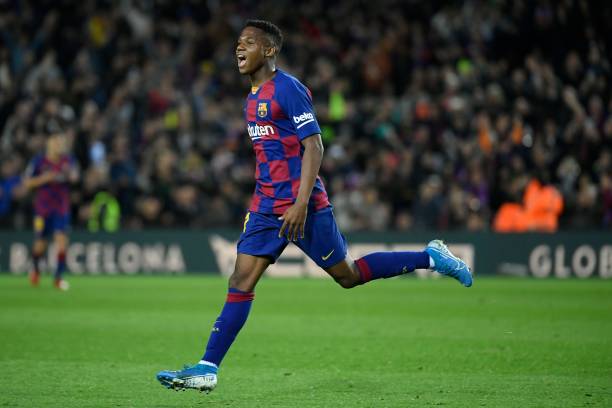 The FC Barcelona wonderkid Ansu Fati has expressed his delight after being nominated as Breakthrough of the Year.

Fati(18) had a brilliant breakthrough 2019/20 season scoring seven goals in the Spanish league. The youngster received praise from all over the world and seemed to carry on with his wonderful form this season but was unfortunately injured and has not recovered since. Despite not playing since November, his amazing performances and records have earned him a nomination for the Laureus World Breakthrough of the Year Award.

Ansu has spoken in an interview with Laureus. This is what he had to say :

“It is an honor for me. You just have to look at the names of the other people on the shortlist and I am proud to be among them. I am grateful to everyone who voted for me, I didn’t expect it. The previous winners of this award have all been important sportspersons and it would not be bad to do as well as they did. It would be an honor to win, but it’s an honor just to be a part. If I win, great. If I don’t, it doesn’t matter.”

On playing for Barça :

“It was my dream to play for FC Barcelona from the day I arrived here. My aim was always to make the senior team and I worked hard enough to do it. Every child that comes to La Masia has the same goal. I just wanted to get as far as I could.”

On being a record breaker :

“Every record was special for me. When you play, you never know what’s going to happen, and I was always surprised after the game to learn that I’d broken a record.”

On playing with Leo Messi :

“It is a dream to play with the best player in the world and learn from him in training. I try to transmit the same humility as he does. Despite all he was done, he is a very simple man, and the advice he gives is always about keeping your feet on the ground.”

On his role models :

“My brother Braima has always been my role model. I got into football from playing with him as a kid. I used to go to watch him play. He and my father have always helped me more than anyone.”

“I thank the fans for their support every day. Football wouldn’t be the same without them. After my family, it’s the fans that most inspire me to keep pursuing my dreams. It’s great.”

On his advice to the youngsters :

“I would advise them to keep enjoying everything they do. Nothing is impossible. Keep fighting for your dreams.”

“I wish to keep improving as a footballer and person. Everything will come, so I don’t set goals. I just wish to keep learning and improving.”

On his top five :

“That would be Víctor Valdés, Puyol, Xavi or Iniesta, Messi and Cristiano.”

On his best team-mate :