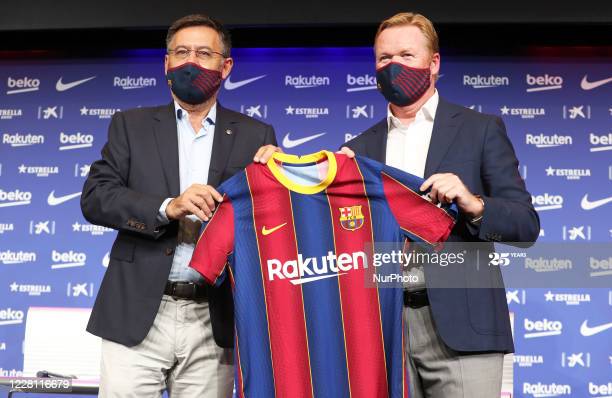 After his presentation last Wednesday, Ronald Koeman faces a decisive week in the rebuild of the first team, according to Mundo Deportivo’s Fernando Polo.

With Barcelona’s first team returning to training on August 31st, fundamental changes are expected to the squad that lost 8-2 against eventual champions Bayern Munich in the Champions League quarterfinal, with several big players on the verge of departure.

The first case that both Koeman and the club are monitoring is that of club captain Lionel Messi. Koeman had stressed in his first press conference in Barça colors that Messi was the cornerstone of his project, and the club has declared him not-for-sale according to Marsal Llorente, despite rumors of the Argentine’s exit heating up. In the meantime, Barcelona’s board still hold hope that Koeman can convince Messi to stay with his sporting project.

The fate of the other senior players remains unknown. In his interview with BarçaTV last week, President Bartomeu remarked that it was “time to dismiss some players with honor”. One of the players thought to be meant by this is Luis Suárez, as the club feels that his time there has come to an end. The Uruguayan expressed his desire to stay for the last year of his contract, even as a substitute, in a recent interview with El Pais. He also said that the club has not communicated to him that he should leave. Mundo Deportivo have tried to contact Luis Suárez’s entourage to try to understand more about this situation, but they received no response.

Another important departure on the agenda is Samuel Umtiti’s, as it would go a long way in decreasing the wage bill. In addition to that, the Frenchman has refused to undergo surgery for two seasons. This has limited his participation and affected his continuity. Ivan Rakitic is another player Barcelona is looking to part ways with. Barcelona have been trying to sell the Croatian since 2019. However, his recent antics after Sevilla’s Europa League win have made his exit more of a priority within the club. And, due to his age, the club understands that he will not generate much money. In any case, Barcelona will hold an appointment soon with Rakitic’s agent, whom he shares with Umtiti, to discuss the pair’s departures.

The case of Jordi Alba is one of the most complex. The left-back’s performances have created doubts in the sports department, but his recent contract renewal until 2024 with improved clauses means that his departure would be very difficult for Barça. As a result, Koeman and Alba have spoken according to sources from outside the club. The Dutch manager has urged the experienced Spaniard to give his best version on the pitch. Sources from within the club are yet to confirm or deny this conversation.

Sergio Busquets’ future at the Camp Nou is also shrouded in doubt. The arrival of Miralem Pjanic from Juventus and the expected change of the style of play to a double pivot in midfield may mean that Busquets gets relegated to a bench role. Frenkie De Jong will most likely then assume the role of protagonist in midfield. Busquets’ entourage say that they have not received any news from the club that the player should leave. Gerard Piqué is a similar case. Koeman counts on Piqué, but it is not clear what path the center back will take. After the game in Lisbon, Piqué announced his readiness to leave if Barcelona bring new blood. Arturo Vidal has also been placed on the transfer list. Despite performing well, Koeman does not count on the Chilean as a starter. Therefore, Barcelona have deemed him transferable.