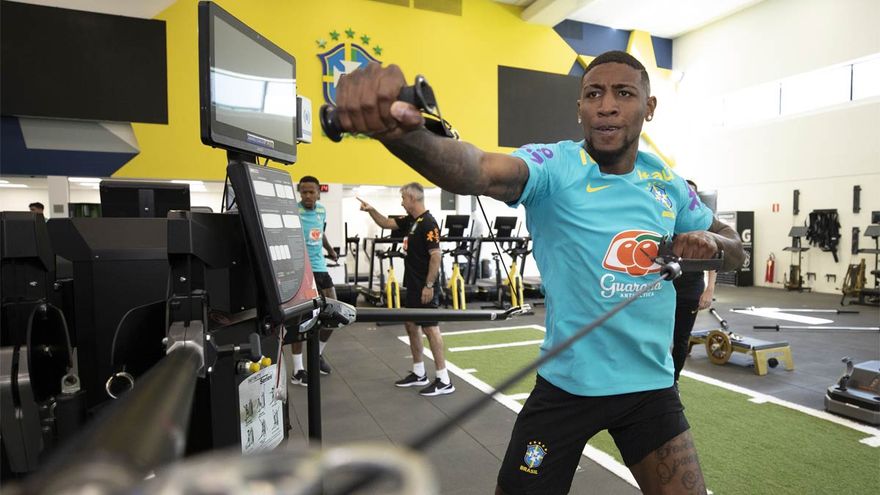 Emerson Royal spoke from the national team camp of the Brazilian national team in the Comary Farm, the training center of the CBF in Teresópolis. In an online press conference, the full-back assured that he will be a Barcelona player for all purposes from July 1 onwards.

Here’s what the Brazilian full-back had to say:

On returning to the Camp Nou

“I know that Barcelona have spoken with Betis, where I was playing on loan, to let them know that they want to get me back. My loan ends at the end of this season, therefore, as of the 1st of July, I am a Barcelona player, and I wish to fulfill the three years that I have signed for.”

The 22-year-old right-back seemed absolutely convinced that his time has come, to start carving out a place for himself in the Blaugrana first squad. Having arrived at Betis, from At. Mineiro, in a joint operation with Barcelona is a fact that, according to the Brazilian, has helped him a lot.

On playing for Barcelona

“For me it is a dream to play for Barcelona. And if this possibility has appeared, it was fundamentally the result of my work, my determination and the evolution that I have had during the time that I have played in Betis. I am very happy. The belief that Barcelona have had in me has been key in my career, now I hope to show my work at Barça.”

On his time at Real Betis

“I am very grateful for everything I have experienced. Since I arrived at Betis I always felt confident in my work because everyone helped me a lot. I have had two very good seasons in which I stood out in one league where I had just arrived, I was one of the prominent players at Betis.”

On his evolution as a player

“I know what my personal evolution has been in recent years, I have grown a lot playing for Betis. I am learning and improving a lot to give the best, which is what I will try to do now in the national team and in Barcelona.”

Emerson Royal would now have to be focused on the Brazilian national team, which plays two friendlies in their preparations for Tokyo. A ligament injury in the right knee of Dani Alves, playing for Sao Paulo, opened the possibility for Royal to make the jump to the senior team, thanks to Tite, a coach who sees great potential in him.

“He is an inspiration to me, I have always followed him and I have a very special affection for him. I hope one day to meet him personally either in the national team camp and, God willing, one day we will play together for Brazil.”

Brazil will now face two qualifying games for Qatar 2022: on Friday, June 4, in Porto Alegre, against Ecuador, and on Tuesday, June 8, in Asunción, against Paraguay. Tite’s team are the current leaders with four victories in four games. Emerson knows he has options to play, although former Madrid player Danilo, now at Juventus, is the preferred starting option for Tite.

On playing for Brazil and the upcoming tournaments

“I am always prepared to play for Brazil, whether in a friendly or in an official match. I am not a person to get nervous, I come to give my best and evolve, which is always my main objective. I would like to play the Copa América and then the Olympic Games, if God wants I will be able to achieve it.”

However, he very cleverly dodged the question of whether he had the authorization of Barcelona to go to Tokyo. Being in the continental tournament, which takes place in Argentina from 11th June, would undoubtedly mean a leap in Emerson’s career.