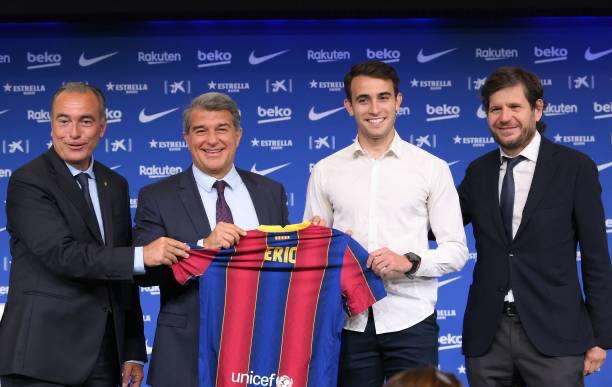 Former La Masia and Manchester City centre-back Eric Garcia was officially presented at the Camp Nou today, marking his return after 4 years away from Catalonia. Joan Laporta, Mateu Alemany, Rafael Yuste and Eric Garcia all spoke at the press conference.

After multiple attempts in the previous transfer windows, FC Barcelona have finally managed to secure Eric Garcia’s signature. Eric is Barça’s second signing for next season as he signs a five-year contract, keeping him at the club until 2026. The central defender will have a release clause of 400 million euros.

After the announcement of his signing, Eric Garcia underwent a medical examination this morning at the Hospital de Barcelona. The Spanish international then completed the medical check-up at the Ciutat Esportiva Joan Gamper. After successfully passing the medical examination, Garcia signed his contract as a Barça player at the President Suñol Box in a private ceremony and then dressed in the Blaugrana kit for the classic photographic session on the pitch of the Camp Nou behind closed doors.

After dressing as a Barça player again, Eric Garcia was presented at the Auditori 1899 at the Camp Nou, where he then went on to give his first press conference after signing the contract.

Here’s what President Joan Laporta had to say:

On Eric Garcia and his welcome note

“Eric, thank you for the effort and the will you have shown to come to Barça. It is a very special day and I am sure it will be a historic day. Knowing the attitude and Eric’s way of being, he is young, mature and arrives prepared to give us joy. For Barça it is a very special day. Thank you Ivan (De la Peña) for the efforts you have made. We in the electoral campaign said that we wanted to wait till the end of the season because we were convinced that he would come. We recovered a home player for Barça, it is as if he had never left. You look like a winner. The level of demand here is very high and what you have to do is win, but you know the Barça style perfectly. The inspirer of all this was Johan Cruyff and Eric has those values very internalized. We are making a signing that will be very successful. It’s a pleasure to have you here again.”

“We are talking with Leo, it is going well. It does not depend on the audit. The result of the year more or less we already have it under control. When we finish the audit we will have more data, but in this operation we already had it planned. I am convinced, as ‘Kun’ said, that he would like to play together. It is not a matter of money on his part, he is showing a lot of understanding. He wants to have a very competitive team and win the Champions League and titles. The signings that we have made are not related to Leo or these negotiations.”

On whether there are more signings on the way

“We said that situations in which you lose and nothing happens have to end. Everything has consequences. There is a certain level of demand. We have to make a deep renovation and we are working on it. There will be more player presentations. We want to incorporate players who improve the squad. Surely there will be news next week.”

On Koeman and his situation

“We are in a period of reflection and I cannot go on saying all the things. I feel very comfortable with Koeman and the result of these conversations will lead us to the best solution for Barça.”

On if they are incapable of making big signings

“We are bringing in high level players, we’ve learnt how to juggle situations around. You have to have experience and knowledge. I am very satisfied with the team we have. Barça can reverse this situation. We have to work hard. Barça have very powerful assets. Eric thought about coming back and there are other players who are very excited to play for Barça. We are beginning to have an effect on the players to come to Barcelona.”

On having six central defenders in the squad

“The experts will decide if we start the season with six center-backs. I like to decide, but technical and sporting issues are a matter for the professionals. Any coach would like to have this problem. The squad has to be balanced and we are working on it. If it will be five or six centrals, I do not know.”

“It is one of those questions that I cannot fully answer, but the conversations are going very well. It is normal that you have the concern to know, but it will not take long. This period of reflection has gone well. I see more of a one than a two (with one implying Koeman staying and two implying his departure).”

On how soon they expect an answer from Messi

“We are already prepared. The sooner the better. Any doubts that may have will dissipate and it helps us to build the squad faster.”

On the possible departures

“Everything is being planned, you will have news soon. If there are signings, there must be exits. We will have to balance the first team squad. You will see the decisions.”

Here’s what Eric Garcia had to say:

On returning to Barcelona

“I would like to thank the president, the vice president, Mateu Alemany, Ramon Planes for the effort they have made. It is a dream come true, my intention was to return to Barça. I hope the future will come with great success. I wish to give everything for this shirt. I’m very happy to be back home.”

“My dream was always to play for Barça and having the opportunity to change in the dressing room is an immense joy. I hope that when the season begins we can have the public at the Camp Nou.”

“It is always a good time if you come to Barça. The president has set an optimistic path, it is a path with both youth and experience. We will do the best for Barça.”

On comparisons with Gerard Piqué

“I cannot compare myself to Piqué. I am still starting my career and Piqué has been the best center-back in the last 10 years and having him as a teammate is a pleasure.”

On the presidential elections

“I was very calm about the elections. Once the elections were over they told me that they wanted to sign me and I made my position clear to return. I am a person who likes to win and I want to start this way.”

On leaving for City 4 years back

“When I left they didn’t trust the youth ranks so much and the City proposal was the best thing for me at the time. I’m very happy with the experience there, but also very excited about the future.”

On his relationship with Ansu Fati

“I have a very close relationship with Ansu and we have continued to maintain contact. I really want to play with him at the Camp Nou. This year he had an injury, but he will return just as he left, at a very high level.”

“I am very grateful to him for the confidence he gave me when he arrived in Manchester. He works a lot on tactics with the players and that is why he is as successful as he is, here or in Manchester.”

On the process of the transfer

“My dream is to succeed here. I have waited for what was needed, the important thing is not what happened but what lies ahead.”

On his preferred formation as a centre-back

“I have to be prepared for whatever the coach asks of me. The competition is very high and that will help us improve.”

On the competition in the squad

“I am a culé myself. I was the happiest with the success and rise of Mingueza and Araujo. If we can play together and give our best, it will be great for Barça.”

“Playing for Barça implies learning certain values, which we are taught at the academy right when we are young. The players coming from other teams learn those values as well, but they are more instilled in the players who go up through the ranks.”

On the details of Eric Garcia’s signing

“For a long time he has gone through a difficult situation for not wanting to renew with City. He stopped participating regularly with the team. It is one of the sacrifices he had to make. In January, the president decided not to sign him, given the economic situation. He had a signed pre-agreement and he made an extra effort to come back.”

Here’s what Rafael Yuste had to say:

On Garcia and his return

“From the first moment we counted on Eric. We thank Iván (De la Peña) for the signing. Dreams can come true and I want to emphasize his attitude of wanting to come to Barça.”