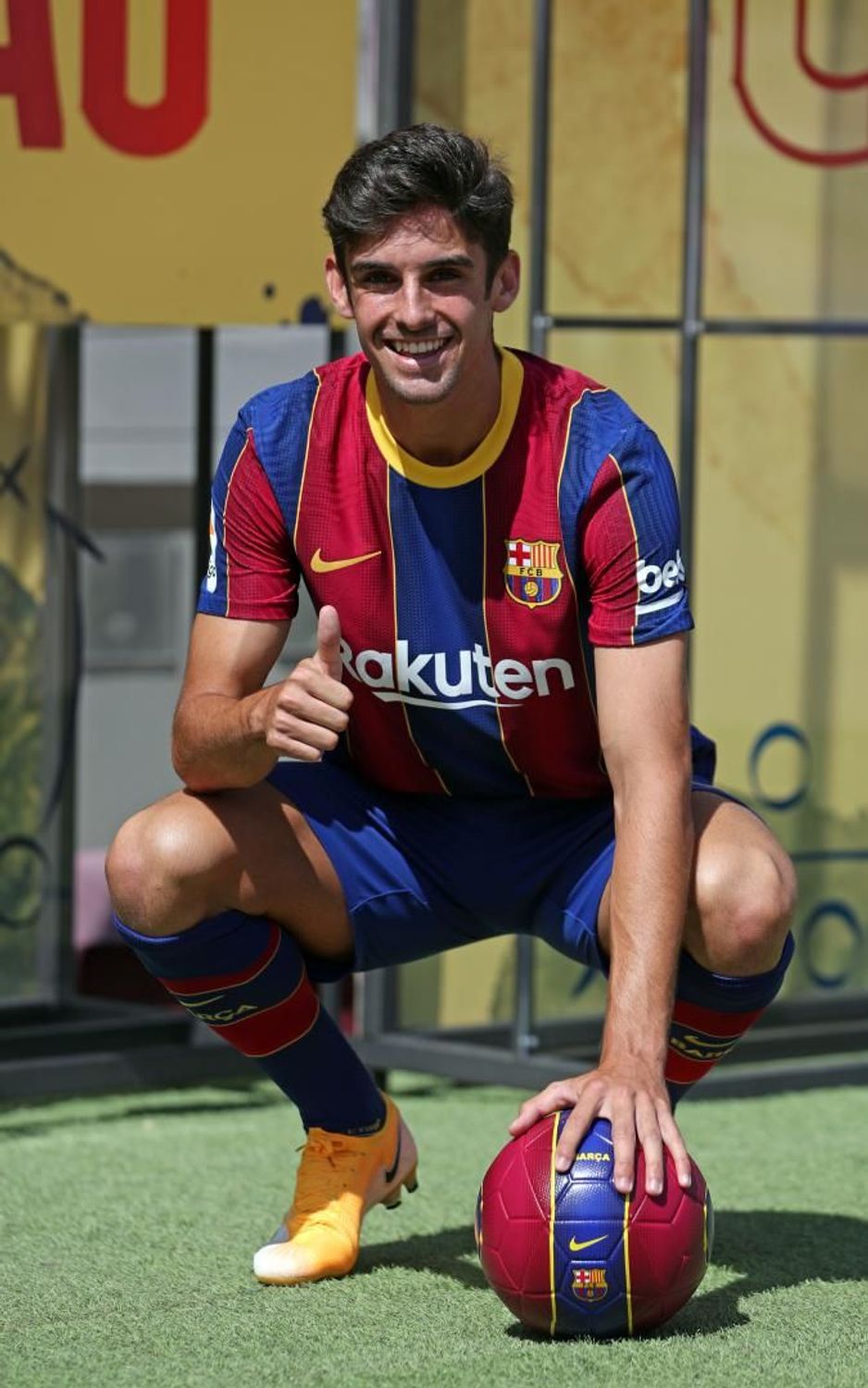 FC Barcelona presented the 20-year-old Portuguese winger at the Camp Nou today and he gave his first-ever press conference as a Barça player.

Technical secretary Ramón Planes addressing Trincão :
“It’s a pleasure to introduce you to our newest player that we signed in January. He can play in many positions, in the midfield, and he recently has been called up by the Portugal senior team. We are building a new winning cycle for the future with the players like him and Pedri. Welcome to the team.”

Francisco Trincão :
“It is a pride to be in the best club in the world and I would like to win everything with this club.”

Feelings about the Camp Nou?
“It is my first day here but I felt very good, delighted with everything. The stadium is very big and I am very happy to be here and I hope to score many goals and contribute with assists too.”

About Koeman and possibly not playing with Messi.
“I have not spoken with Koeman yet, and about Messi, of course, I want him to stay, let’s see what happens.”

Coming to Barça and the quality players leaving, is it a disappointment or an opportunity?
“I arrived two weeks ago, and I am here to do my job and be a benchmark for this club, but I can’t answer other things.”

Do you think that with Messi’s departure you will have more playing time?
“As I said, I am here to do my job and play the maximum number of games.”

In Sporting Braga you have scored and assisted goals, which do you enjoy more?
“I like to assist my teammates as well as to score goals.”

In Braga, you have played as a winger and in interior positions as well, where are you most comfortable?
“First I have to talk to the coach but I can play in all positions, I’m here to help and let’s see what the coach wants from me.”

Would you like to give the performance of Luis Figo at Barça?
“Figo did a very good job here, but I’m here to write my own story.”

How do you approach your arrival in Barcelona?
“They told me a lot about the club and the city. It will be different from Braga, but I hope to enjoy and make people enjoy themselves.”

As a young player who inspires you?
“I see players like Lionel Messi as a reference but as I have said, I have to work very hard to be succesful.”

How does the club react with Messi’s goodbye and if it is reversible?
“The truth is that it was shocking news, although we have already said, we see Leo Messi as a Barça player. Today Trincão has arrived and we hope that he will triumph alongside Leo.”
“Barça has rebuilt itself many times throughout its history and has always come back stronger.”
“Our idea is to create another winning cycle around the best player in the world.”

Is Barcelona going to accept the exit clause or will Messi have to negotiate?
“For Leo, you have to have enormous respect for who he is and for his history. We do not contemplate any exit from Leo on a contractual level. What we want from him is to stay.”
“Leo has given Barça a lot, this union that has given a lot over the years and internally we are working to convince Messi, to find the best solution for Barça and for him.”

As the technical secretary, how will you manage in case Messi leaves?
“We are adding talented young players like Pedri and Trincão and along with the experienced players, our goal is to build a winning team. The Barça we all want to see.”

Is there a division inside the board about the departure of Leo?
“There is no doubt, we all want Leo in the team. Anyone who understands football wants him here to win again.”

On the manner of the heavyweights’ exit.
“The club works internally on the new project. Koeman told he would speak with the players privately and he has done it. You have to have a lot of respect for the players who have given a lot to the club.”
“These are difficult moments and sometimes the decisions are painful but they are private and internal conversations.”

Has Messi communicated that he will not be in training?
“Messi has not told us that he is not going to show up for the training, but any communication will remain between the parties and we will not broadcast what is discussed out of respect. We must work together.”

As the technical secretary, can you assure that the squad will be better than last year?
“Obviously we are working to make the squad better. It is the job of the technical secretary. Many times we have been criticized for the work, but the results showed in due time. It is a thankless job. Surely the players who have arrived will give a lot to Barça.”