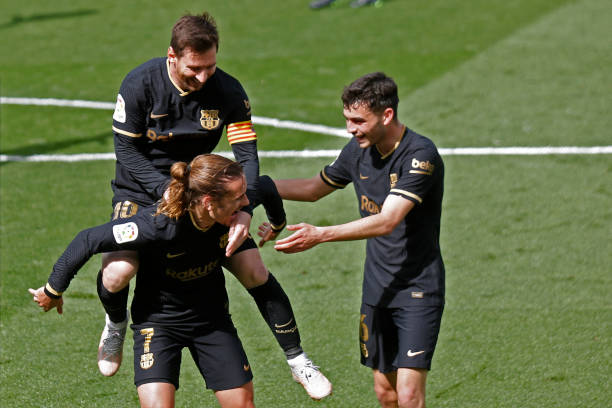 FC Barcelona emerged victorious against Villarreal with a 2-1 win in a closely contested match at the Estadio de la Cerámica, courtesy of an Antoine Griezmann brace. Ronald Koeman, Griezmann and Sergi Roberto spoke after the match.

Here’s what Ronald Koeman had to say after the victory:

On the win against Villarreal

“It’s true that we had a great first half and we reacted well. In the second half we had more turnovers. We had the opportunity for Frenkie to score, but they played a great game and we weren’t very fine. In addition, Villarreal played a great game and we were a bit tired too. It always costs at the end of the season. The 1-1 gave us confidence, it was a fantastic goal from Antoine. It was very important to react quickly.”

“I don’t know if it was the most complicated match that we had left, but it is true that Villarreal have a great team. They tried to pressure us and have very good players at the top. Yes, I have to admit that the opposition was very strong.”

On the possibility of achieving the double

“You have to go game by game. Of course it depends on the Atlético game. We have six games left, we are in and the team is very hungry to win a big title again. Going game by game is the best way to win the league.”

On the tight scheduling of games

“We have played a lot , especially in the Copa del Rey, many games that went to extra time, they have worn the team down. This week we have Thursday and Sunday matches again , but the big teams are used to such tight schedules. We have to accept the calendar, but I think we have to talk about the calendar of the big teams. I know that we always play Thursday night and Sunday, and I have said it for teams like Villarreal, it always costs.”

On if he sees the title closer than ever

“It is closer, but I don’t know if it is very close. We have a track record of many victories. And what the team is doing is something very big, trying to win LaLiga as well. We know that if we win all six games we will be champions. We are going to go with everything we have to try to win LaLiga.”

On the conservative approach to the second half

“We have always had very good ball possession, I always thought that things could be improved when we don’t have it. I know our way of playing is risky. What other teams do is much easier than what we do. In the second half we said that we are going to go down a bit and play together.”

On the improvement shown by Frenkie De Jong

“For me, he has improved a lot. You cannot compare the Dutch League with the Spanish LaLiga, because the physical level is different. He can be criticized for not scoring one of the two opportunities, but what he is doing is very good, getting to the top, running a lot and defending. He is a very important player for this team.”

“Griezmann’s first quick goal was key . A great, fantastic goal from Antoine. He gave the team a lot of confidence to control and play and prevented Villarreal from taking control of the game.”

Here’s what Antoine Griezmann, who scored a brace today, had to say:

On the importance of his first goal

“The key was to not fall apart when they scored the first goal and to work together. Before their goal we had missed three times. We have to try to get the first to have the easier game going forward. We have six finals left and we have to win everything.”

On his positioning and movement

“I try to be there among the center-backs, ask for space, give teammates space. It is not my natural position, but I am proud to be at Barcelona and play with these teammates. Sometimes I score, other times I assist and if not, I work for the team.”

On how he sees the league

“We all want to win LaLiga . There are four teams, including Sevilla, that are fighting. We will try to win every game. It is the only way to be champions. It will not be easy, but we have the group to achieve it.”

On who the favorites are to win the title

“The one ahead is the best positioned. Atético are having an incredible run in the league, we are doing our best. We have it in our hands. We just need to win all the games we have. We will fight.”

Here is what Sergi Roberto had to say:

On the important victory at La Cerámica

“It was key to score after Villarreal’s goal and to go ahead before the break. We are close to the goal of LaLiga, we depend on ourselves.”

“We had very clear chances, Asenjo reacted well to deny us that goal. When we conceded, scoring quickly was key. We knew how to overcome and go into the break with the score in our favor.”

On reaching 300 matches for FC Barcelona

“It is a great pride for me, I hope there will be many more and above all, with victories and titles. If I have to keep one, I’ll take the one from the debut.”