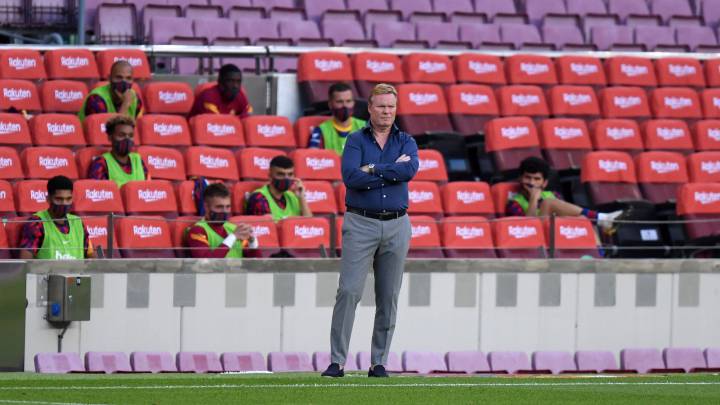 After winning the Joan Gamper trophy clash against Elche, Ronald Koeman, Coutinho, and Pjanic gave post-match interviews, where they talked about the match, the new season, and more.

What happened to Riqui Puig?

“It is not true that I told him that I do not count on him. I spoke with him yesterday before the session. Riqui’s situation also applies to Aleñá, and maybe later for Pedri. The three of Riqui, Pedri, and Aleñá have to play because they are young players and cannot be on the bench for the whole season. I have told him that it is very difficult to play because he has a lot of competition. We are looking for the best way to fix it.”

“I would recommend him to go on loan. These guys have to play. They cannot stay without minutes and they have a lot of competition.”

Do you need a pure 9 to strengthen the team?

“We have enough quality in the squad with the forwards. It can be Griezmann, or Messi, or any other player at the striker position. Today we had exchanges in attack and that made it more difficult for the rival.”

How have you seen Pjanic?

“Not many conclusions can be drawn because physically he is not yet at his best. It is normal that he comes from suffering the coronavirus and he has to go little by little.”

“Hopefully we can see Coutinho at a high level this season. He is an important player who is working very well.”

“He is a great player. The boy is 17-year-old and we have put him into specific situations in the game to make him more focused.”

How did you feel playing your first game at the Camp Nou as a coach?

“It was special, but it would have been more special with the support of our fans in the stands.”

Pressing seems to have become a trademark for your team, right?

“I like the team to push. We have pressed a lot and we have recovered many balls, but we need to be more forceful upfront. I’ve seen the best Barça so far in the first twenty or twenty-five minutes of the second half. But I am unhappy because we have only scored one goal.”

Do you have the equipment you wanted?

“I have seen the footballers a bit tired at the end. I liked the start of the game, stealing a lot of balls, but in the attack, we weren’t fine.”

On the start of the La Liga season next week

“We leave with good feelings. We have only one week left to start everything and we are working hard, and we are all focused to have a good year. We haven’t had much preseason time and we’re going from less to more. Every day we are working more and more and we are getting used to the way the coach wants us to play. We have a week with a lot of work left.”

On his feeling for the upcoming season

“I am really looking forward to things going well, and am very motivated. I hope to work hard this year so that things go well in the field. Everyone is working very hard, focused, and getting used to the way we train now and I think this is very good for the team. Hopefully, it will be a great year for everyone.”

On making his debut for FC Barcelona

“I am very happy to have been able to make my debut. It feels very good to have played here in this stadium.”

On the preparations for the upcoming season

“The team is working hard and now we have to be ready for the games to come. We are ready for LaLiga. We are working hard and with intensity, and I am looking forward to the competition starting now. I need some more training but we will work to get there.”