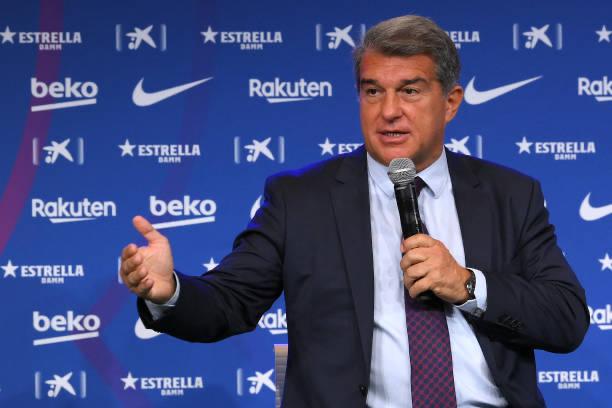 FC Barcelona president Joan Laporta and spokesperson Elena Fort held a press conference today, where they talked about the decision to continue with Koeman, the audit, Jordi Cruyff and much more.

It was Joan Laporta who spoke first:

“After this period of reflection that we have taken with Ronald Koeman, Rafa Yuste and myself, on behalf of the board, I want to announce that we will continue with the current contract that Ronald Koeman has . We are very satisfied that the conversations have been fruitful with a unity of criteria of what to do next season and an evaluation of what happened in the past.”

On the decision to continue with Koeman

“It has been reflected and it has been decided to give continuity to Koeman because we are satisfied with how this period of reflection has gone. We have known each other more. Ronald has had an impeccable behavior. I looked for solutions to small differences. His continuation is what’s best for Barça. We are happy to be able to announce it. I see him very motivated and excited, with maximum demand and convinced that it will be a great season.”

On the talks and reason behind the decision

“We did not want to talk about sports issues to a professional, who knows much more. Yes we have spoken to him on philosophical subjects, about mentality. We think that we have picked up the sentiment of fellow board members and of Barcelona. And we have seen a very hopeful Koeman that the season will be very good. The conversations have been very good and we have talked a little about everything. Of course they talk about systems issues but we know our limits and I can’t argue with a coach who gave us the first European Cup and has been the coach of several teams. I don’t dare to tell him what the system should be, but what we think and what could have been done. He has arguments to deny ours.”

On the period of reflection

“I like to meet key people at the institution. In the past I had a personal relationship with Frank Rijkaard and Pep Guardiola. I had the need to meet Ronald and he thanked me for it. We already brought Rijkaard. That is the difference. In other areas it would be normal but at Barça it acquires more media attention. I did not pay much attention to the media attention it could have. I have apologized to him for any discomfort caused. The relationship was good, it wasn’t bad, but not that deep. Now, from a very solid base, we are working with Rafa Yuste, Mateu Alemany and Ramon Planes, trying to build a way of working that makes us all comfortable.”

“If he did not have one more year of contract, we would have still reached the same conclusion. The year that he had on his contract has not conditioned us.”

“For now, we are continuing the contract and I suppose we will sit down shortly to discuss this issue. Rob Jansen was also impeccable but we did not talk about contractual issues.”

On a possible salary reduction for Koeman

“Ronald already made an effort. We have not contemplated anything of a salary cut. He knows about the efforts we are making and he helps in the sense that he understands the financial situation of the club. If this has to be dealt with, Alemany and Jansen would sit down but now we are not occupied with this issue. Ronald is an understanding man and he likes everything we are working on.”

On if they didn’t have the money to fire Koeman

“It is not true that we have not terminated the contract because there was no money to do so. We did not want to terminate the contract, but if we had wanted to, we could have done so and then this period of reflection would not have been necessary.”

On Koeman’s motivation and willingness to continue

“Koeman’s figure comes out reinforced. He has a valid contract. We have deepened the relationship and we see him very motivated. I see the glass full and with great force for Koeman. It is ratified in the relational aspect by the board of directors.”

On what the future holds for FC Barcelona

“I hope a Barça with a more winning mentality and with the players that we will have, we will be able to have a more offensive style and playing how we like, having the ball and pressing more since there will be players with more virtues that serve for a more intense pressure. And I hope that all this will help us win well and that at the key moments of the season there is no relaxation and there is the winning mentality that must be demanded at Barça.”

“He will be linked to the sports structure and will depend on Mateu Alemany. He has had a first-rate career as a coach and technical secretary. He can contribute a lot to the technical secretariat. It has been a very emotional meeting because it represents the return of a Cruyff back to home. We are very satisfied and we hope that the work we put in will be successful. In addition, he is a wildcard to certain situations that may arise. He has a good relationship with Koeman. We are dressing, sportingly speaking, a powerful model.”

On the decision to continue with Koeman being unanimous

“Everyone has voiced their opinion, those who have wanted to express it. Koeman is the coach that we want for the Barça first team. We are satisfied and convinced that he will lead us on the path of success, with a very competitive team.”

“The transfers didn’t depend on whether Koeman would continue or not. We have been working on most of the players we want for a long time and have already signed a few. Next week we hope to announce another signing.”

It was spokesperson Elena Fort who spoke next:

“The board agrees for the General Assembly 2019-20, which was not held due to the pandemic. It will be held on July 4 at the Camp Nou.”

“We will hold the assembly of delegates at the Camp Nou, something that has never been done and is a way of calling the delegate partners to join us.”

“One of the points is the approval of the fiscal year of last season and the agreement with Goldman Sachs.”

On a membership campaign for the fans

“We have agreed to open membership at FC Barcelona so that any fan can acquire this status without any type of restriction. There will no longer be obstacles such as kinship. It is about liberalizing the entry of members to the club, so that anyone from anywhere in the world can join.”

“At the moment, the only formula to register as a member is in person, but we will work so that it can be done electronically, helping to universalize the club.”

“Everything is being studied and we will not comment until we have the final conclusions.”