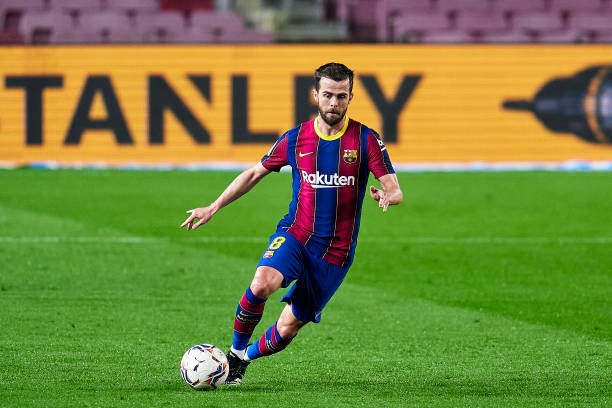 Napoli becomes the latest club to join the race to sign Miralem Pjanic from FC Barcelona who is currently on the radar of many Italian clubs. Barça expect the midfielder’s transfer to be completed before the transfer window closes.

According to Moisés Llorens from ESPN, Miralem Pjanic has sparked Napoli’s interest and they are not the only Italian club looking to secure the Bosnian’s services. Juventus and Fiorentina continue to monitor Pjanic’s situation as he looks to complete a move away from the Camp Nou this summer.

Miralem Pjanic joined FC Barcelona in the summer of 2020 from Juventus in a swap deal that saw Arthur Melo move the opposite way. Since then, he has not featured much for the club and has failed to become a significant figure in Ronald Koeman’s plans. As a result, Barça look forward to offloading the player and he has attracted interest from various clubs.

According to past reports from ESPN, Juventus and AC Milan have held talks with Pjanic, while reports elsewhere claim Inter and Fiorentina have also shown interest. Pjanic’s preferred move is a return to Turin, but sources tell ESPN that he will listen to other offers as well. Juventus coach Massimiliano Allegri would like to be reunited with Pjanic but his club’s failure to sell Aaron Ramsey makes the deal financially difficult.

Barça, meanwhile, won’t mind opening the doors for Pjanic to leave the club as they look forward to lightening their wage bill which despite the pay cuts taken by few players is still quite massive and the player believes that a return to Italy, likely on loan, will be the best for his career at 31.