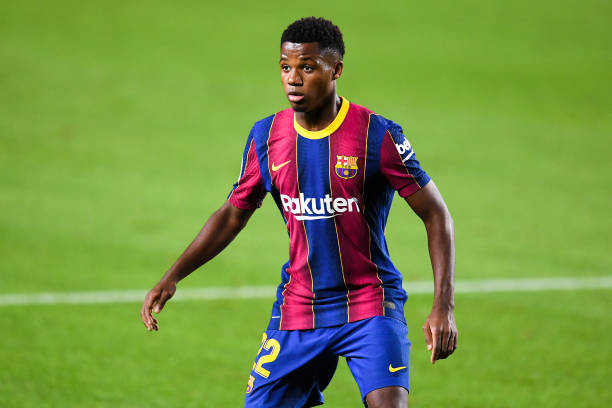 According to Mundo Deportivo, Barça are looking to extend and improve Ansu Fati’s contract which runs out in 2022, amid rising interest across Europe for the breakout La Masía graduate.

FC Barcelona is very clear that apart from the needs in terms of signings to strengthen the front, there is another priority issue related to the front line: shield the future of Ansu Fati, who is just 18 years of age and has a big future ahead of him. The young winger, now pending to solve his problems in the meniscus of his right knee, is the jewel in the club’s crown.

As much as Erling Haaland, Borussia Dortmund striker, is thought of as a target to reinforce the attack, at Camp Nou they are clear that in terms of quality and charisma, Ansu is a star to pamper and take care of, in order to have all his career as one of Barça’s post- Messi emblems.

For this reason, the Barça directive, according to sources from Mundo Deportivo, with Mateu Alemany and Ramon Planes at the head, has the firm intention of undertaking an armored operation to extend Fati’s contract shortly. To date, the forward has a contract until 2022, with a release clause of 400 million, and with a clause according to which the club could extend its relationship with the player for two more seasons, that is, until 2024.

However, since the party that is in charge of watching over the player’s contractual situation (in this case, Jorge Mendes’s company Gestifute), maintains that this clause that, in theory, Barça considers unilateral to extend the contract for two more years, is not valid.

In this scenario, according to Mundo Deportivo, what the current sports managers of the club are clear about is that they cannot enter into any discrepancy with Ansu that could jeopardize his relationship with Barça or reach the summer of 2022, for which there is little more than one year, with uncertainties about the contractual relationship between the two parties. For this reason, the club wants to create a shield for the youth Spanish international that goes through extending his contract in an effective way directly for five more years, that is, until 2026.

Another thing that remains to be seen is whether the release clause is also raised or not, although with the current economic conditions, the 400 million set are unaffordable for any club. Although the economic situation is what it is and all the economic parameters advise lowering the wage bill, but with so much interest across Europe and being a starter, it is precisely Ansu who wouldn’t be looking to settle for reduced wages .

Fati can play on the wings but can also lead the attack because he has speed and overflow with a particular eye for goal, thanks to his shooting instinct. He is compared to Mbappé, who dazzled at Monaco at the age of 18 before signing for PSG. Ansu can only grow and Barça wants that, once he is fully recovered. Focused now on his recovery, he has set May 2 as the date to know how his knee is and whether or not he decides to undergo another surgery.