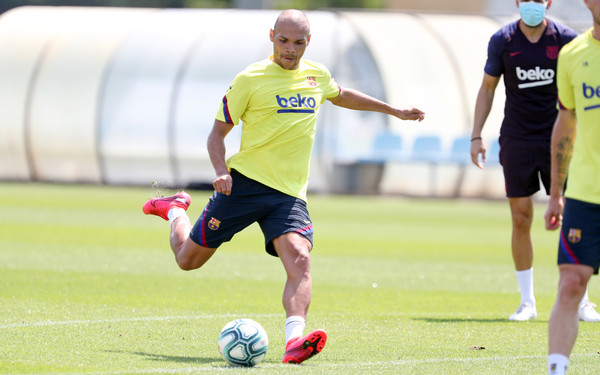 Martin Braithwaite revealed the last moments before signing to FC Barcelona and stands at the most important milestones in his career, In his Interview with The Guardian.

When FC Barcelona received the permission to sign a substitute to the French winger Ousmane Dembélé after suffering an injury that prevented him from completing the season and made the club apply a request to the Royal Spanish Football Federation (RFEF) to sign a player from La Liga to complete the rest of the season, Martin Braithwaite was unlikely to be this signing even after he received contacts indicating that his name was linked with The Catalan club, he didn’t tell his wife Anne-Laure until this interest was confirmed.

He said that “She felt something going on because I was having a lot of phone calls, sneaking out the house when it was freezing outside, She was wondering, almost asking if I have a mistress or something. And the night I said: ‘I have to tell you something.’ She said: ‘I know what you’re going to say.’”

“But the day I wanted to tell her, everything broke, my phone got bombarded all day. I was thinking ‘oh, shit’. Her phone was the same, so she wasn’t surprised when I sat her down. I was disappointed I couldn’t get that shock reaction but she was really happy and she understood that I didn’t tell her.” The Danish striker added.

‘football, life, is about taking risks’

The Danish striker, who was suffering at the Championship with Middleborough and who was fighting to say on LaLiga with Leganés found himself playing on Camp Nou with one of the best teams in the world not only this but he involved in 2 goals in his first appearance with the Barça shirt including an assist to Messi, What made him say jokingly “I won’t wash this shirt[his debut shirt].” He also added that he wasn’t feeling any Disturbance or tension in the field “It’s funny.” “I think my head doesn’t work like others. I didn’t think about that for a second. Afterward, people said: ‘It shows your character: you did a huge mistake, you looked like you couldn’t play football, kicking the ball miles away’… and it just got me smiling because football, life, is about taking risks.

If you walk around in a bubble and don’t try to get out, you’ll be safe but you’ll never learn. I’m not afraid to make mistakes or embarrass myself. Human beings are good at judging ourselves, we don’t see mistakes as mistakes: we take it deep in [side]: ‘I’m a failure, I’m really bad actually.’ But when babies learn to walk, they don’t judge themselves when they fall. Keep going, keep learning.”

The enthusiasm to seize the opportunities and learning, things that helped Martin in his career even when he joined Leganés he spent weeks watching videos of the team and how to use the spaces, he said in Leganes, it should be close to Guido Carrillo, but in Barcelona it is all about Messi who Braithwaite said about: “If football’s a religion, he’s its God.”

“Messi takes attention away. People forget to look at what’s happening around him because he’s such a threat. There’s space and we have to understand how to exploit that. Then when you do, [opponents] realize ‘these guys are making runs: watch out’ and then you’re giving space to Messi. It’s about intelligence,” he said.

As for Luis Suárez, he said:” “I was really excited to play with Luis Suárez, too. He was injured but now he’s back and I’m looking at him: how he moves. He understands the game so well, he’s so intelligent: when to link, when to turn, how to use his body. I ask questions, I’m learning. The knowledge these players have is priceless.”

The coaching staff had many questions from Martin since he came to the team and they admitted that they rarely had players that ask so many questions as Braithwaite did. “I don’t like to see myself as different but I am curious, I want to learn, think about the game differently, mentally and technically.”

Difference between Middlesborough and Barcelona

There is a huge difference for sure, there are two contrasting mangers as Quique Setién and Tony Pulis, Braithwaite was not in love with Pulis’s style of play and he didn’t imagine that the guy who failed on Teesside is at the Camp Nou now. “I’m the same person.” He said.

“I’m grateful,” he said. “I learnt a lot. I don’t have a problem [not playing] because a manager has hard decisions. I didn’t fit. That’s life. It’s normal, not personal. It adds different tools for me for the future. No hard feelings. Only, things were said that are far from the truth – some really, really bad comments after I left.

“We’re human and football is full of emotion. Middlesbrough supporters are passionate and I loved that. I believe in freedom of speech; people are allowed to show their disappointment. I shared that disappointment. People next to me know my values. It’s just a shame some try to create a picture of me. But it’s part of who I’ve become, what I learnt, what brought me here. It’s been a hell of a journey.” He said that about his period at the English team.

Things that inspired him

Martin was born for a Guyanese father and a Danish mother who met in the US, his wife is French, and he had trails in England and Italy, in addition to playing in Spain, France, as these places affected the formation of Braithwaite, who said “you only really start to know yourself when you visit new places, new inputs for your brain.”

He also suffered from an injury that forced him to sit on a wheelchair “I spent two years in a wheelchair. I had something called Legg-Calve-Perthes, a hip disease. You have to rest your hip, not put pressure on it, because it can turn soft and become deformed. I was really young, five to seven, and I don’t have a lot of memories. Before, I have memories. But it was a sad time so I think I erased this.

“My parents have explained it and I do remember wanting to play football, looking at everyone playing. I needed someone on me because I was trying to jump out of the wheelchair. My dad says when I played again it made him sad: he could see his son running around but he was limping.

“People ask if I’ve brought that into my life. Not on a conscious level; subconsciously, maybe there’s something in me that’s helped me to be grateful and have an understanding. But consciously, no.”

Despite that the lockdown period made many people struggling but it had great news to Martin as he had his fourth child; Valentino.It also gave him time to get closer to his wife and playing video games with his sons.

Commenting on the death of George Floyd, Martin said: “It’s terrible, it’s terrible. And I’m happy for the reaction, that people are getting together to change this. We’ve been seeing this too long, it’s sad [racism] is still happening. Football’s the biggest sport; it’s important we send a message.”

How’s he getting ready to the return?

I take inspiration from other sports, how they train the mind. I’m thinking: ‘Why aren’t we doing these things in football?’ I’m trying to bring this into my routine. Your body can’t tell the difference between reality and what you see in your mind, so you can improve through visualisation.

“Usually when we imagine ourselves in a stadium, we see a full stadium; now I turn it around: I’m stepping on to a pitch where there’s no one. I’ve seen it so many times in my head now that it will be no surprise when it happens. Mentality will play a big part. You can’t say: ‘We lost points; next game we have to …’ There’s no time for that.

“When we first returned to training, it was so strange, really weird. I don’t think we’ve really had time to think about it; when we look back, we’ll think ‘this was crazy’. But it’s over now. It is starting to feel like normal life again.

“I woke up today the way a kid wakes up for Christmas, with a big smile on my face. Match week, preparing for a game again. I woke up and I said: ‘Man, I’m really here.’”